3D Hubs has released their monthly Trend Report, this time based on 23,000 3D printers in their worldwide network, including the recently introduced 3D Hubs HD, an industrial-grade 3D printing service available through their platform.

Chris Elsworthy, CEO of CEL and creator of the Robox 3D printer commented: “The 3D printing market continues to develop and the range of great printers available to buy is making competition even fiercer, so we’re obviously thrilled to see the CEL Robox climb the rankings again this month. We’ve seen all 3D printing companies upping their game both in terms of hardware and software as people across the world use their printers to create increasingly amazing designs using new materials and techniques, and the sector continues to be one of the most exciting and innovative industries to be in. Robox is releasing its own new hardware, software, and material innovations in the coming months and we can’t wait to see what else the industry will come up with to continue driving 3D printing adoption across the world.”

The SLA 3D printer Form 1 claims the forth position, followed by Afinia H480 and the Zortrax M200. 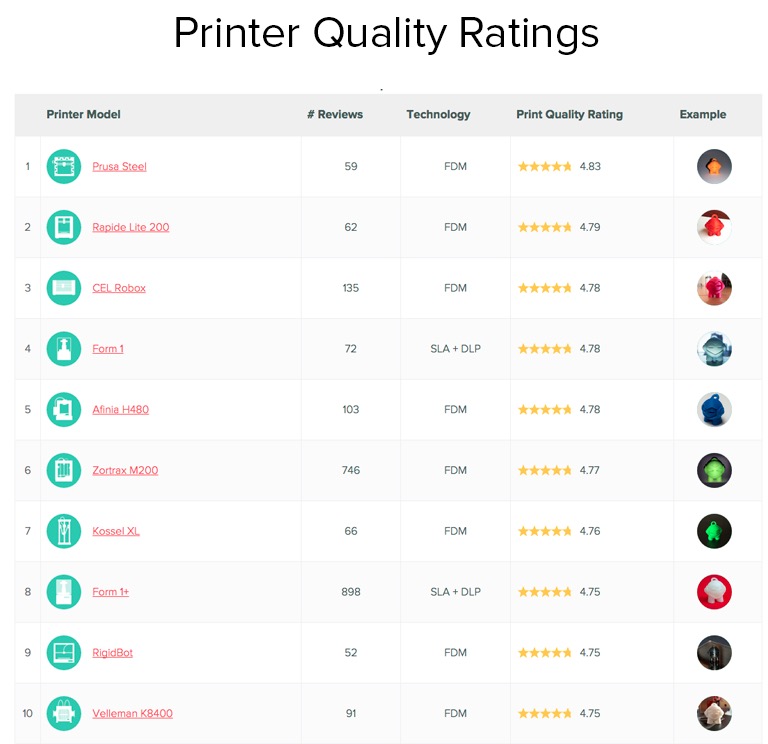 The Duplicator I3, based on the popular i3 design by Josef Prusa, is the trending printer in October, featuring a MoM growth of 33.3%, followed by the Ultimaker 2 Extended and the M3D Micro 3D printer.

As the Form 1+ climbed up 30 spots the fifth position, 3D Hubs speculates to see the popular desktop SLA 3D printer taking over a couple of spots in this category due to the release of Form 2 as well as price reductions for its predecessors.

Click here to view the full report for October.