More than 150 years after a woolly mammoth skeleton was discovered in the Belgian city of Lier, the skeleton has been replicated in a 3D-printed avatar and put on display in the city of its discovery. A multidisciplinary team comprising archeologists, paleontologists, Materialise engineers and production operators worked together to realize one of the world’s largest 3D printing projects to date.

When a woolly mammoth skeleton was unearthed in Lier in 1860, it was a landmark event for the archeologists of the day. The problem was that Lier had no city museum to display their giant discovery, and the mammoth was put on display at the Museum of Natural Sciences in Brussels. 158 years later, with Lier set to open the doors to a new city museum, the time was right for Lier’s biggest inhabitant to make a triumphant return in the shape of a 3D-printed avatar.

Dr. Mietje Germonpré, paleontologist at the Royal Belgian Institute of Natural Sciences in Brussels, said: “When I heard that the mammoth of Lier would be 3D-printed, I was amazed. 3D printing has already been used for reproducing missing bones, but here we were talking about an entire mammoth, and I think it’s the first time this has been achieved. 3D printing gave us the opportunity to create a new, more scientifically accurate reconstruction of the mammoth’s anatomy.”

To replicate the fossilized skeleton of the original mammoth, Materialise began by optimizing the 3D scans of each of the 320 bones. Materialise engineers then digitally reconstructed the skeleton together with Dr. Germonpré and prepared each file for 3D printing.

Production took just under 7 weeks with 1259 hours of printing time, occupying 9 large-format printers, depositing millions of 0.1mm-thick layers of resin in the process. The tusks alone, at 2 meters long each, took up the full build platform of Materialise’s patented Mammoth Stereolithography printers. Traditionally these are used to print prototypes of dashboards and bumpers for the automotive industry.

The next challenge was finding a way to mount the skeleton in a way that the awe-inspiring mammoth wouldn’t be marred by a visible scaffolding. In response, Materialise’s Design & Engineering team developed a modular carbon fiber structure that could support the skeleton from the interior. The invisible mounting system and the 3D-printed skeleton combined weigh a lean 300kg.

“For a big project like this, the actual printing is a relatively small part,” said Gertjan Brienen, Project Manager at Materialise Manufacturing. “What makes Materialise the right partner is our software competencies, engineering services and ability to co-create with external experts like Dr. Germonpré. And then it also helps to have one of the world’s largest and most diverse 3D printing facilities at our disposal.”

The mammoth is the latest in a series of historical preservation projects undertaken by Materialise. Previous highlights include life-size 3D-printed replicas of King Tutankhamun and Ötzi the Iceman. Both cases included Materialise’s 3D scanning the mummies, reconstructing them as 3D models, and 3D printing them with Mammoth Stereolithography technology. 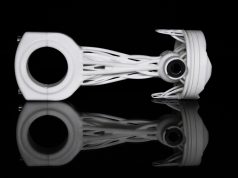 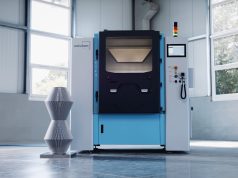 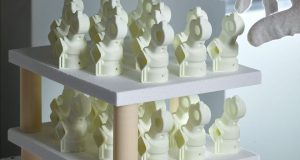