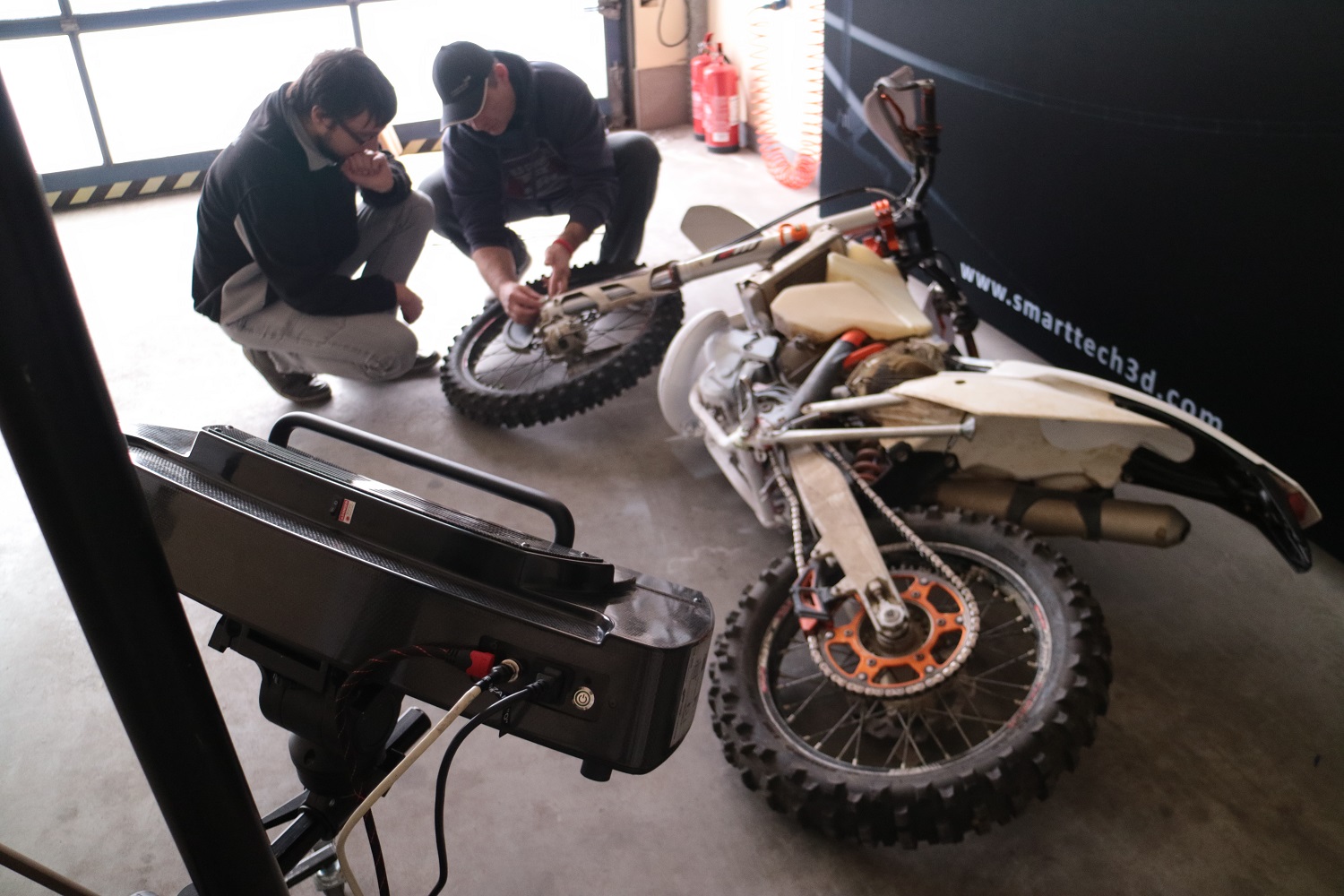 Enduro-Tech is a company that manufactures accessories for enduro motorcycles. It was founded in 2012 and within a year it became one of the best known brands in the market of companies manufacturing motorcycle accessories. Its success is due to the company’s extensive knowledge of the industry and the use of the newest technologies allowing it to both design and manufacture parts.

The company Enduro-Tech uses a SMARTTECH 3D scanner in order to obtain the geometry of the motorcycle engine for which it is planning to manufacture a dedicated casing. 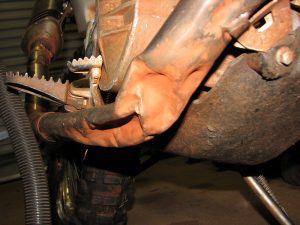 During off-road rides motorcycles of this type are exposed to repeated impacts by obstacles on rough terrain. The high speed and off-road environment often surprise a rider with an unexpected obstacle, which hits the engine. Constant impacts to the exhaust pipe and the engine can severely damage a motorcycle.

The company Enduro-Tech, which specializes in the design and manufacturing of dedicated engine casings was founded in order to meet the high market demand for additional casings. Thanks to SMARTTECH 3D scanners it is possible to obtain the geometry of the engine and then to design the casing in such a way that not only does it perfectly fit the engine but is also lighter and – which is very important for a lot of customers – it perfectly matches the aggressive look of the motorcycle. The entire design process is carried out on a computer giving the engineers responsible for the project complete freedom.

The solution does not affect the measured surface and is easily cleaned with a pressure washer or a brush.The measured surface consists of glossy metal elements. That’s why the underside of the engine is firstly covered with a non-invasive anti-glare solution, which allows for a clear capture of the geometry by an optical measuring device. 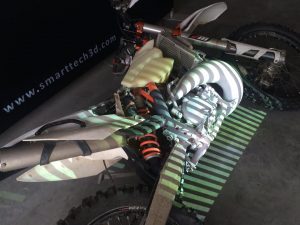 Next, the measuring head projects fringes, which appear geometrically distorted once displayed on the object – that is due to the surface shape of the object.

The model of the 3D scanner used in the Enduro-Tech’s workshop is a MICRON3D with 800 x 600 x 310 mm volume, a 5MPix detector and 0.07 mm accuracy. It means that the maximum size of the surface that can be scanned with a single scan is 80 x 60 cm. The result of a single scan is a five million point cloud that corresponds to the 5 megapixel resolution of the camera and represents the measured surface with a 0.07 mm accuracy.It is this distortion that is captured by a detector implemented in the measuring head of the 3D scanner. The information from that distortion is then provided to the proprietary software SMARTTECH3Dmeasure. 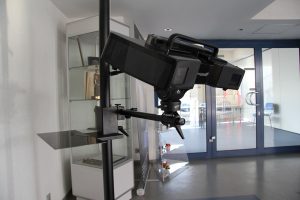 The software converts the data obtained by the measuring head providing information in the form of a cloud of points that accurately reflects the shape of the scanned object. In order to fully scan the engine it is necessary to perform ten single scans for each side. Due to the sharp angle between the projector and the detector, it is possible to ‘look’ in the narrow edges and obtain information about surfaces impossible to measure using conventional methods.

The software SMARTTECH3Dmeasure allows us to clean the point cloud from the so-called measurement noise and unnecessary parts of scans, such as fragments of floor or other fragments of the motorcycle. The complex geometry of the scanned engine allows for the merger of individual scans through the use of alignment ‘on three points’. It is done by finding three common points on two different scans. After selecting three points the software not only  aligns the scans in terms of their orientation but it also performs the operation Global Registration, which allows for an accurate alignment of groups of points. The software is also capable of automatic merger of scans based on the positioning markers that are attached to the object, which speeds up work when dealing with larger objects.

Work in the SMARTTECH3Dmeasure ends with the creation of a triangle mesh that precisely corresponds to the shape and size of the scanned surface. The triangle mesh is saved in an STL format, which is the most universal file format describing the geometry that is used by CAD environment.

The next step is CAD modelling based on the triangle mesh – for which we use the software Geomagic for SolidWorks – the latest product from 3D Systems – which is sort of a plug-in for a popular program for CAD modeling – SolidWorks. The created triangle mesh consists of millions of connected triangles that precisely form the shape of the surface of the scanned object. The triangle mesh is calculated based on the data about the geometry provided by the cloud of points and – that’s very important – it doesn’t change the obtained geometry and dimensions. 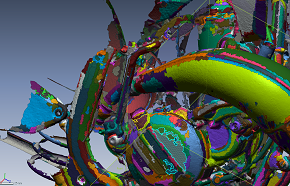 odel into regions that will serve to extract the characteristic shapes into the proper CAD model. We can easily add features (characteristic traits) to a given surface, which will serve in further shape extraction. 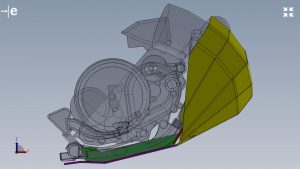 The shape of the engine consists mainly of flat surfaces and cylinders that the program automatically detects significantly reducing the time necessary in order to create a CAD model.At any moment you can inspect the quality of the modeling by comparing the CAD model to the triangle mesh. Any deviations will be presented on a clear colour map of deviations.

With a triangular model of the engine, we can proceed to the proper modelling of the engine casing. At every step we can use all functions of SolidWorks such as 2D dimensioning that can be used to prepare the production process. In this particular case metal sheet cutting and bending.

The former method of modelling parts used by Enduro-Tech, which relied on manual cutting and folding of cardboard and then fitting it, was completely computerized.

The 3D digitization of an object has many benefits.
The problem often faced by Enduro-Tech during the prototyping period is the poor repeatability of the bending machine. Despite having a very accurate model of the 3D scanned engine there were instances where the real prototype did not perfectly fit to the motorcycle. Focusing on developing the highest quality engine guard Enduro-Tech was forced to adjust the part many times and cover all expenses of every prototype.The digital method of measurement not only reduces the cost and time needed to design a fairing but it also gives full freedom when modelling without the need to lengthen and fit it. Furthermore, it allows us to predict and adjust the production method of the casing.

The complex geometry of the accessory meant that even the smallest error in bending, because of how difficult it is to track when it occurred, might become a major problem after the entire prototyping process. 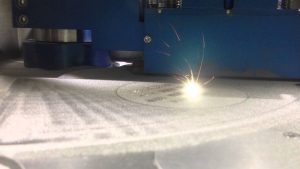 Thanks to establishing the cooperation with the British company Croft Additive Manufacturing – specialising in rapid prototyping by using the most advanced 3D printing technology based on melting  stainless steel powder – the company Enduro-Tech accelerated and optimised the process of creating a prototype.

A very thin layer (about 0.1 mm) of metal powder is distributed on the 3D printer’s workspace and then the laser melts the powder in such a way that it creates the first “layer” of the desired virtual geometry within 20 microns of accuracy. After melting the powder from the first layer the 3D printer distributes the second layer which is melted in the same way. That way the printer creates the object layer by layer accurately providing the complete geometry of even the most complicated object.

Having a very accurate prototype that is almost indistinguishable from the virtual model allows Enduro-Tech to identify the origin of the problem, thus significantly reducing the prototyping time.

Because the prototype is made of stainless steel it can be quickly tested directly on a motorcycle.

The ability to comprehensively verify the protoype improves the quality of the serial production of parts. Enduro-Tech can be sure that using the latest 3D scanning and 3D printing technologies they will distribute a product that passes the most difficult requirements of the Enduro motorcycle riders.

The use of the SMARTTECH 3D scanner by Enduro-Tech is not only concentrated on scanning engines to design additional casings. Enduro-Tech also specializes in the production of ancillary halogen lamps, and thanks to the numerous connections in the world of motorcycles, it also provides the service of scanning for other motorcycle workshops that manufacture motor vehicles like Café Racer or Custom Choppers. 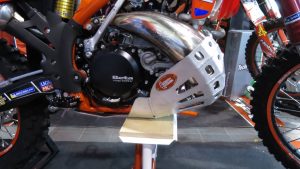 Thanks to the SMARTTECH 3D scanner the company Enduro-Tech can accurately digitize motorcycle parts in order to design dedicated, additional or replacement parts. The 3D scanner also raises the quality of the products that the company offers, making it one of the best known suppliers of parts in the off-road racing motorcycle industry.