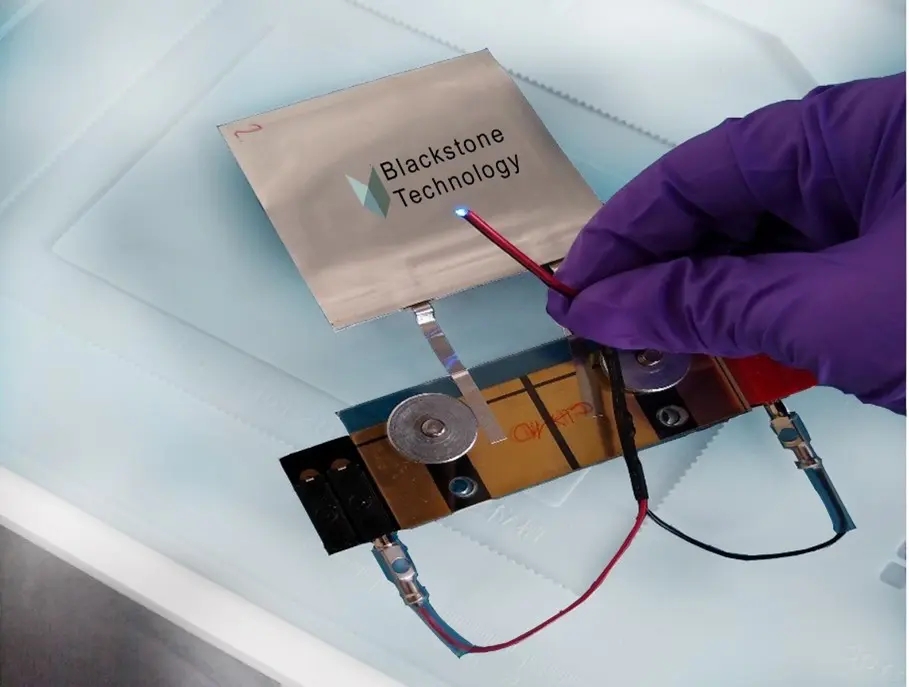 Blackstone Technology GmbH, together with a German industry and research consortium, will take the validated laboratory results (see press release of 12.4.2021) of the 3D printed solid-state batteries to the stage of demonstration in a real environment within the next three years. The results of the development project will form the basis for the subsequent implementation to market maturity. To implement this, €32 million will be invested in a pilot plant at the production site in Döbeln and in extensive developments. Furthermore, the upscaling of sodium-based solid-state electrolytes on a ton scale is being developed in order to be able to produce them in the Blackstone Group from 2025. This project is being funded by the German Federal Ministry of Economics and Climate Protection as part of its support for the battery cell manufacturing ecosystem with a total of up to €24.1 million (subject to the grant decision becoming legally valid).

The 3D printed solid-state batteries produced as part of the project will be installed in an electric bus operated by the Berlin-based company Eurabus in order to validly demonstrate their performance in realistic test series. The Zeiss company is contributing its extensive expertise in metrology and microscopy. The Fraunhofer Institutes IFAM, IKTS, IST and the Institute for Particle Technology of the Technical University of Braunschweig will work on process validation, process development, recycling, safety and economic-ecological life cycle assessment.

The next generation of battery technology

“Sodium-ion technology represents the next generation of our already market-leading 3D printed batteries,” said Holger Gritzka, CEO of Blackstone Technology GmbH. “We are pleased to once again make an innovative and viable contribution to clean energy and the carbon-neutral transportation of the future.”

The chemical system of sodium-ion batteries is comparable in parts with lithium-ion cells. A significant advantage of sodium batteries is that raw materials can be obtained much more easily and in a more environmentally friendly way with comparable technology. The availability of sodium is many times higher than that of lithium, and the price is significantly lower. In addition, the raw material does not have to be imported from outside Europe like lithium.

The construction of a solid-state battery cell not only increases the energy density, but also improves many safety aspects of the battery. The prototype production of sodium batteries is designed in such a way that a wide variety of active materials can be used. Product-specific adjustments to the battery at cell level can thus be made quickly and cost-effectively. The printing process plays a decisive role here and allows volumetric optimization in addition to geometric adaptation.

As early as early 2025, Blackstone Technology will have successfully tested the new solid-state sodium-ion batteries in an electric bus.

The declared goal is to print complete solid-state battery cells at high speed, thus achieving unprecedented flexibility in terms of shape and performance with one and the same machine park. The use of Blackstone Technology’s cyber-physical system increases productivity and quality with the help of artificial intelligence.

Founded in 2015, EURABUS GmbH was previously a subsidiary of EURACOM Group GmbH, a special vehicle manufacturer and bus supplier active on the market for 25 years.

Fraunhofer IFAM is a materials science and manufacturing research institute focusing on metallic and polymer materials. The development of safe, reliable, and durable solid-state batteries in combination with different printing technologies is a central component of the research work.

In the business unit “Energy”, Fraunhofer IKTS offers innovative components, modules and complete systems for energy technology, which are developed, built, simulatively optimized and tested on the basis of ceramic materials and technologies. In its branch office in Forchheim, Fraunhofer IKTS has established a preparative and cross-scale, multimodal analytical workflow that allows safe and artifact-free microscopy. On this basis, optimization and further development of next-generation solid-state batteries is made possible. As part of the [email protected] program of Zeiss, IKTS and Zeiss have jointly developed workflows in advance, which will be used and further sharpened in the project.

The Fraunhofer IST carries out intensive research and development in the fields of materials synthesis and functionalization, surface treatment and modification, coating manufacture and application, coating characterization and surface analysis, as well as in the area of production technology.

In the field of battery process engineering, iPAT researches the systematic production of customized lithium-ion and solid-state battery electrodes on the basis of in-depth process and particle engineering expertise. The aim of the work is to investigate the performance-effect relationships between the production process, the resulting electrode/battery structure and the performance as a basis for the development and economical production of new battery generations.