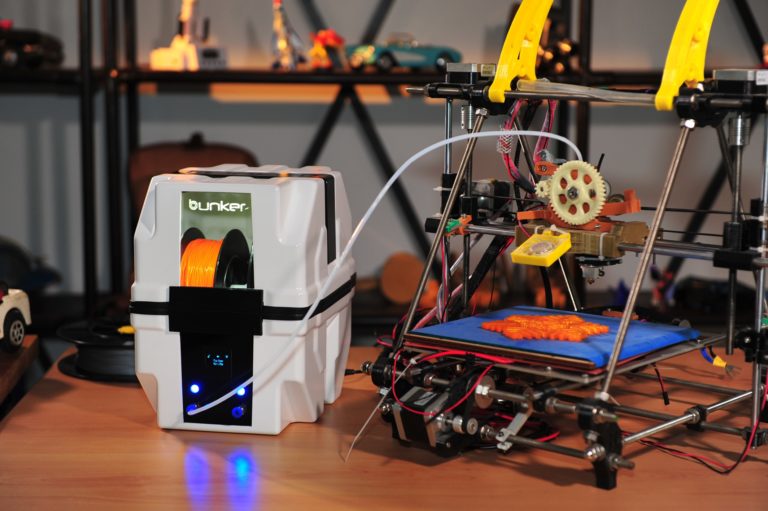 Many of our readers and users of a 3D printer have already had trouble with filament clogging. Often these problems accrue when you are away and you have no chance to fix them. The founders of the Bunker thought about these problems and as a solution they have developed their device. The Bunker keeps track of every inch of filament and provides a dust and moisture free environment for the filament. And of course, if any problem occurs it informs you with the help of a smartphone app.

August 17th 2016 – The Bunker can store 2 roles of filament – the type or diameter doesn’t matter but it works especially well for materials that are hydroscopic, such as PVA, PC and Nylon. The bunker app provides statistics about how much filament was used and how much is on the spool. If your filament runs low during a print job it will send you an warning over the smartphone app. Then you can pause the print and change the filament.

According to 3D Printing Systems they have been developing their product since February 2015 and it has already gone through three prototype iterations so far. The project has already a website that provides a nice overview of the features. If you are interested you can sign up on the website and you will get informed via email when the Kickstarter campaign will be launched. As an alternative there was also a filament dryer announced only a few months ago – you can read our article about it here.

For just 145$ ($199 NZD) you can preorder the bunker on the crowdfunding platform Kickstarter. The original retail prize will be around 190$.