Bentax has discovered in a project that it is possible to reuse expensive, worn-out milk pumps by 3D printing replacement parts for them from metal. This technology reduces waste and expense in manufacturing and opens up opportunities in other areas as well. Tests show that the spare parts work almost like new pumps.

“Here and now it is a huge success, and we are very satisfied with where it is in terms of price, so we are ready for the next round with 3D printing, and it is also a fantastic story for us to be able to tell our customers”, Anders Myrup, Bentax.

Milk pumps are the root of all evil

During their service of coffee machines, Bentax has experienced a challenge with the milk pump, where some parts wear out quickly. It is a big expense, as you cannot get spare parts for the pump, and therefore have to buy a brand new pump from the supplier. This has meant that Bentax is now left with a large pile of useless milk pumps, which actually work fine apart from two worn out parts.

“These milk pumps are the root of all evil in a coffee machine, because if they don’t work optimally, there are many other expensive parts around the pump that suffers. This requires many trips to the clients and means that the individual technician cannot handle as many customers, so it requires more employees, more service vehicles etc. So to stop the vicious spiral, it is important that the pump works optimally”, says Anders Myrup, Technical Project manager at Bentax.

The solution was to be found in a MADE Material Demonstration project together with the Danish Technological Institute: the goal was to investigate whether the critical metal spare parts could be 3D-printed so Bentax could reuse the expensive pumps instead of having to buy brand new ones – and at the same time see if the pumps could be made to last longer?

“We have chosen the most difficult task to test 3D printing, and the one that gives us the most challenges. If we can solve this, we can solve anything. In addition, we have ‘green mindset’ and would like to solve our tasks in a more responsible and sustainable way. So it would be interesting if we could digitize the inventory to a greater extent and at the same time have components manufactured locally instead of having them sent from the other side of the world”, says Anders Myrup.

In the project, Bentax looked specifically at the 10 percent of the milk pump that typically wears out. It involves some gears and a small housing for these, and the problem is that the gears cut into the housing over time and make some tracks, which means that the pump cannot deliver the desired result.

“Initially, the aim is to pump some life into the broken pumps so that we can recycle them. In the long term, we would like to be able to make the spare parts rather than buying new pumps from the supplier, and we would also like to achieve a longer durability and a lower price compared to a new pump”, Anders Myrup, Bentax.

In the project, the entire pump has been scanned and measured at the Danish Technological Institute, who has made an identical digital copy. The housing has then been 3D printed in stainless steel and post-processed down to the desired tolerances, which are very fine. 3D printing was also tested for the gears, but they were not strong enough, and instead they have been milled out with a traditional CNC milling machine in a material called Peek.

Along the way, there has been sparring between Bentax and the Danish Technological Institute, and this has led to three different design versions, which have been tested. At the end of the project, Bentax is not far from the goal in terms of achieving the desired result from the pump. The 3D-printed housing is completely in place, but some very fine adjustments still need to be made to the gears.

In the long term, the components must be surface treated with chromium nitride so that the surface does not break when the gears work against it, and the expectation is that this will increase durability.

In the project, Bentax has been pleasantly surprised by the possibilities with metal 3D printing.

“The results we have seen are beyond all expectations, and when we held the parts in our hand, no one really believed that they were 3D printed. It was far beyond what we thought was possible, so we clearly did not have enough insight into the technology”, Anders Myrup, Bentax.

Anders Myrup also highlights the MADE demonstration project as a fantastic opportunity to test a new technology and eliminate doubts:

“When you are an old-fashioned company like we are, you are always sceptical of new technology and of just diving into it. So it is absolutely fantastic that you can uncover it and get it financed in such a project. We have now had the opportunity to verify a technology that we would not otherwise have started with – then we would probably have gone down different paths or stayed where we were. In any case, we had not done it in the scale and with the haste in which we are doing it now. So the scepticism, we had was put to shame, he emphasizes.”

The MADE Material demonstration project is now finished, but Bentax is still working on the final alignment of the gears. After this, the entire set must be machined so that the output can be verified, and then it must be installed in a customer’s machine, where Bentax will monitor it over a 15-month period. But they are already prepared to proceed with 3D printing.

“We don’t stop here, even though the project is over and we don’t yet have all the answers, because the project has shown that 3D printing makes sense. Here and now it’s a huge success, and we’re quite satisfied with where it is in terms of price, so we’re ready for the next round with 3D printing, and then it’s a fantastic story for us to be able to tell our customers”, says Anders Myrup.

Bentax has already started mapping other components that could be suitable for 3D printing for future projects.

“We see many more possibilities now, also beyond the parts we put into the machines. It could be specially designed tools or adapted holders and hooks for the work tables in the workshop, so that we can optimize our processes – and this is derived from this project”, says Anders Myrup and adds in conclusion: “I think that when we have to develop our inventory and digitize it further, it will also be 3D printing that will form the basis.” 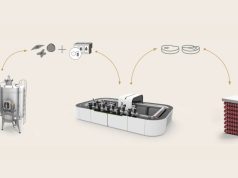