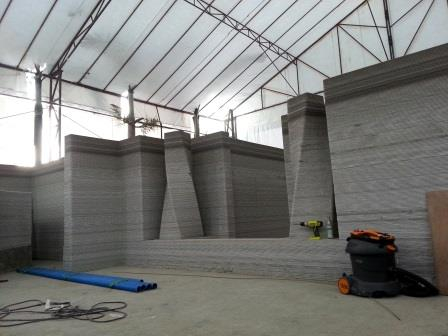 Andrey Rudenko, who made headlines with his 3D printed castle completed back in August last year, is onto a new project. This time he collaborated with the Lewis Grand Hotel in the Philippines to 3D print an entire hotel suite including jacuzzi.

The engineer with a background in architecture had developed his own concrete 3D printer and partnered with the hotel’s owner, Lewis Yakich, to create an entirely 3D printed building. Rudenko has just released pictures and a video of the ongoing construction on his website.

Unlike the allegedly 3D printed modular homes created by the Chinese Zhuoda group, this building is actually printed on site. On around 130 square meters, the villa will fit two bedrooms, a living room and a jacuzzi room. In order to install the required plumbing and wiring, the printer had to be stopped several times.

Yakich has also revealed his plans to 3D print 20 homes this November, saving cost and time in comparison to traditional construction methods. In doing so he would not only like to be able to provide affordable housing to people in the Philippines, but everyone to have a high quality home.