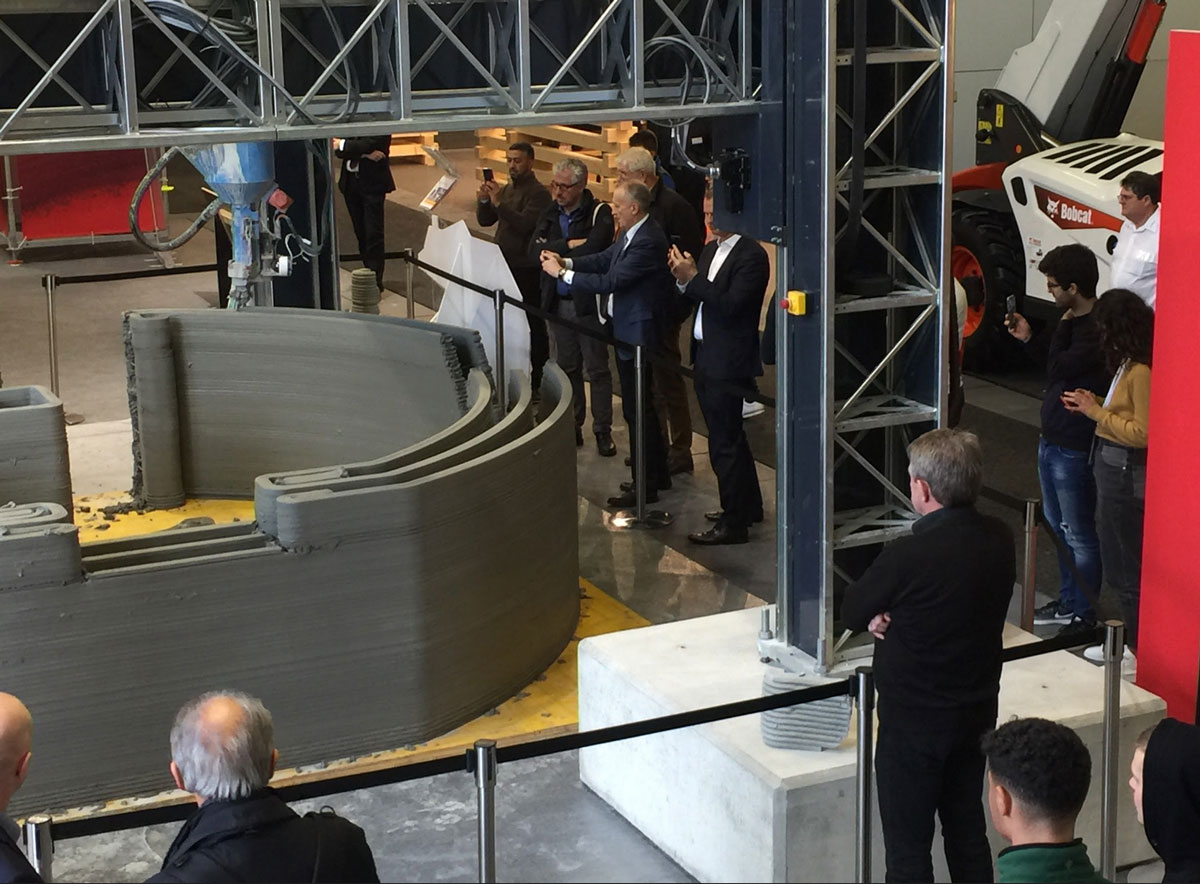 During the international Bautec construction exhibition in Berlin with over 30.000 visitors from more than 40 countries COBOD and PERI is not only showcasing COBOD’s BOD2 3D construction printer, but is actually live printing a small house every day of the show, February 18-21. Visitors are invited to come and see for themselves.

Henrik Lund-Nielsen, CEO of COBOD explained: “It is so easy to video film a 3D construction printer in action and then edit out anything unplanned occurring during the printing to produce a nice looking video in the end. There are so many examples out there with heavily edited and manipulated content, far from what is happening with the same printer in real life printing. When you print live, it is not possible to hide anything. With this live printing we are documenting, that our technology has the quality, robustness and stability to perform hour after hour, day after day. We plan to print the walls of a small house each day just during the opening hours of the exhibition, and everybody is invited to follow the process.”

COBOD’s BOD2 printer began shipping in January last year and so far COBOD has sold 7 of these. Nobody has reported higher sales than that making the BOD2 the most sold 3D construction printer in the world. The BOD2 has a maximum speed of 100 cm/second, but COBOD has been very open about that limitations caused by materials and pumping equipment has meant that the maximum speed so far has “only” been 40 cm/second. Still, the 40 cm/second has not been beaten by any other provider so far.
The BOD2 has a modular build and can thus be extended with modules in width, length and height of 2,5 meter. In the length the printer has no restrictions, while the BOD2 maximum can have 6 modules in the width (= 15 meter) and 4 modules in the height (= 10 meter). The BOD2 printer brought to Bautec is a model 2-2-2, such that the printing area roughly is 5 meters in the width, length and height.

Tilmann Auch, COBOD product development engineer, commented: “We would of course have liked to bring an even bigger printer, but printing here during the exhibition has meant some limitations. Consequently we are only printing a very small 1 bedroom house of app. 4 meters by 4 meters. Also when it comes to the speed, we have had to restrict ourselves. During Bautec we are only printing with 25 cm/second. This is due to the EU robotics directive, that requires a safety fence around the printer, if we were to print faster. We surely did not want to put a fence up, as it would too much block the visitors’ possibility to see the printer in action, which is the very reason why we are here. “

Since the launch of the BOD2 last year, COBOD has made improvements to the printer and some of these were shown for the first time publicly at the Bautec. First of all the printing of the walls have been made even more smooth, by changing the extrusion system applied. The result is a very remarkable improvement in the smoothness of the print as seen on the pictures.
Secondly, COBOD has developed a new method for setting the printer up, involving premade concrete feet unto which the Z-axis are mounted, which reduces the setup time with 50% and enables the setting up of the printer in a new location in just 4 hours.

Henrik Lund-Nielsen concluded the announcement by explaining: “We use this occasion to also show some of the improvements, that we have made since we launched the BOD2 last year. Especially I am glad to show, that our finishing quality of the 3D printed walls now is so good, that only minimal plastering is needed afterwards to arrive at the desired quality. All in all we are very happy to be able to showcase our technology live here at Bautec and by the many visitors we have here spending half an hour or more on taking videos and photos, I do believe the visitors are also very happy with what they see”.