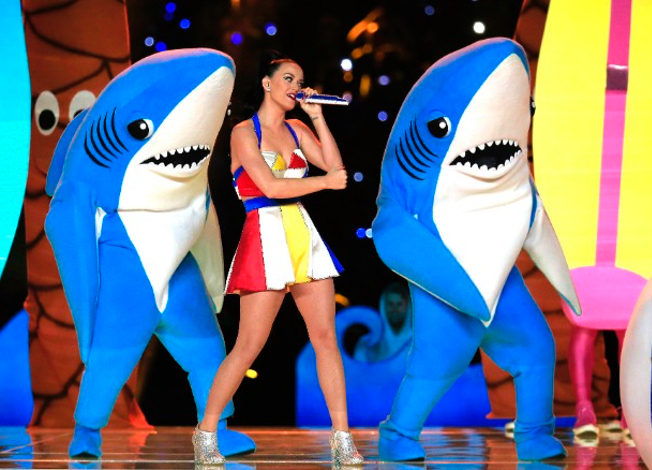 February 9, 2015: The dancing shark also caught the attention of designer Fernando Sosa, who shortly after created a 3D printable modle of the mascot to sell it on Shapeways. His business idea however was soon turned down by Katy Perry’s lawyers, who demanded Shapeways to take down the left shark 3D model due to copyright infringement.

Meanwhile Sosa has made the figurine available for free download on Thingiverse and commented:

“Since some lawyers send a cease and desist to Shapeways.com where I was selling this little bad boy shark and I cannot longer sell this. Apparently sharks, palm trees and beach balls are all now copyrighted… anyways I’m making this available to everyone. Now you can 3D Print your very own left shark. Just make sure you download this file ASAP since just in case its taken down.”

He is currently trying to raise $ 500 via his gofundme capaign, to fight against Perry’s lawyers. Sosa, who is also selling satirical 3D printable figurines via his website Political Sculptor, gets support from Christopher Springman, Professor at the New York University School of Law.

“As You know Certain Celebrity send their lawyers after me. Not going to say who it is but rhymes with Merry. Anyways these lawyers who also happen to represent people trying to supress marriage equality in florida. Claim they own the rights of anything depicted in a half time show, including a Blue aquatic figure also know as a shark.”

Additionally Sosa has created another 3D figure, called the “Blue Drunk Shark“, which is now available for download on Shapeways.

After Left Shark had been taken down from Shapeways due to a cease and desist letter, that was sent to the company by Katy Perry’s lawyers, the dancing shark figurine is back.

Shapeways explains: “As a service provider, our liability is protected by the Digital Millennium Copyright Act under their Safe Harbor provision. We outline this detailed process and guidelines, and encourage all our designers and any copyright holders to follow it to ensure swift action on our part.”

After receiving a counter DMCA Notice sent by Christopher Springman, Sosa’s lawyer, Shapeways allowed for the 3D model to be reinstated, while the two parties decide what to do. The company has also requested a properly formatted DMCA Takedown instead of a cease and desist letter from Perry’s lawyers.

Fernando Sosa, aka PoliticalSculptor, comments in his blog: “… So enough lawyer terminology for this post. Pretty much my design is back up until they prove copyright or send me to court. So get yours before the sharks get him.”

The US Trademark Office rejects Katy Perry’s request to register “Left Shark” as a trademark. Trademark examiner David Collier explained that the applicaton”identifies only a particular character; it does not function as a service mark to identify and distinguish applicant’s services from those of others and to indicate the source of applicant’s services.”

The examiner also found differences between a photograph of her dancing with Left Shark and the submitted design and described them in detail.

However, Perry has had more luck with registering the word mark “Left Shark”. The officer only asks for a more detailed identification of the goods she wants to protect.