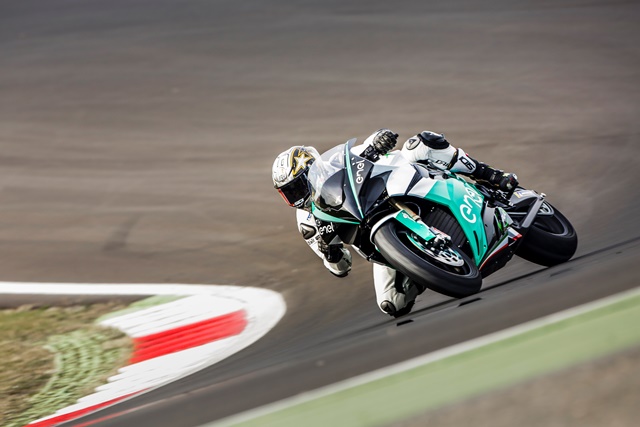 Ego Corsa, the Energica’s electric racebike for the FIM Enel MotoE™ World Cup, will be developed through CRP Group’s know-how

“Our history comes from racing, Energica is part of the CRP Group, since 1970 a pioneer in the world of international motorsports and a hub of excellence for its state-of-the-art technologies. Our passion in the field of innovative technologies has never faded. We are ready to sign a new chapter in motorsport history along with the CRP Group, Dorna, Enel, FIM and Michelin”.

With these words Livia Cevolini, CEO of Energica Motor Company S.p.A. and Marketing Director CRP Group, introduces the electric racebike Ego Corsa, which is the tuned version of the Energica Sportbike Ego. Ego Corsa will be used by racing teams at the FIM Enel MotoE™ World Cup.

The relationship between Energica, the first Italian manufacturer of high-performance electric motorcycles, and the CRP Group will be continued at full capacity even in this new era of two-wheeled motorsports.

The CRP Group technology will be supporting the development of the Ego Corsa.

The “Energica” project was born between 2008 and 2009 when the company created an all-electric racing bike called “eCRP”.

The design of this race bike required technical expertise and the experience and technologies inherited from the parent company, CRP Group, allowed to create a new concept of motorcycle racing. CRP Group’s know-how in F1 world and aerospace industries supported Energica into further developing electric technology and creating a line of premium street-legal electric motorcycles. The team raced for two years and then started working on a new project: Energica, the first high-performance electric motorcycle.

Livia Cevolini states, “The attitude towards innovation, the ability to evolve it and the “look beyond” disposition are our milestones. In a short time Energica has opened a new chapter in the history of Italian Motor Valley, creating a new field within the automotive market: the high-performance electric motorcycle segment”.

Today, Energica Motorcycles’ range includes 3 models, among them: the sportbike Ego. This model will be used by teams that will race the FIM Enel MotoE™ World Cup in a tuned version, the Ego Corsa.

The R&D Energica team is already committed to this bike, working on drivability on the track, and then on track specifications. Testing demo program will be held during the 2018 MotoGP™ World Championship.

Ego Corsa will have many similarities with the production bike it is derived from, and the CRP Group team will be involved in many phases of Ego Corsa development.