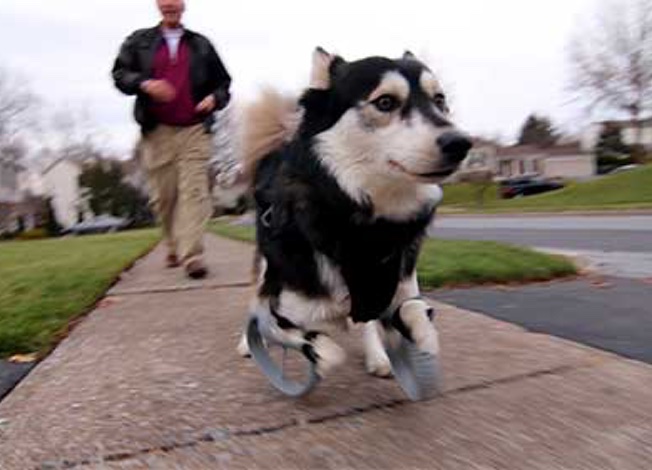 Derby the dog was born with a malformation in his front paws, that limited him extremely in his movement. Although he managed to move around in soft, indoor environment, he just could’t run around outdoors as he would have liked to.

December 17, 2014: Animal-lover Tara Anderson, who has rescued and fostered many other dogs, just couldn’t turn away from helping yet another one and volunteered to foster Derby. He was then outfitted with a wheel cart to increase his mobility. “It was a good solution for him to move in straight lines, but overall it wasn’t super maneuverable, and he still couldn’t play with the other dogs or play fetch like he wanted to,” Tara said. “We needed something better.”

Being a 3D Systems employee, Tara was familiar with the capability of 3D printing technology and turned to her colleagues at the office for help. In collaboration with dog orthotist Derrick Campana, they have designed and later 3D printed prosthetics on the ProJet 5500X.

“They were an immediate success,” Tara said. “As soon we fitted them on Derby, he took off running. It was incredible. I can’t describe how gratifying it was to see him finally get to move like he’d always wanted to.”

Watch the video below to see Derby run around with his new “legs”:

The first version of Derby’s prosthetics kept him intentionally fairly low to the ground. The first pair was not only a concept test for the feasibility of the overall design, it also started the process of acclimating Derby to a new elevation.

“We wanted to give Derby the opportunity to gradually and comfortably adjust to a vertical status quo. Had we skipped this intermediary step and immediately addressed his height in isolation of his ambulatory abilities, his story would have evolved differently. His struggles would have outweighed his successes.”

The initial design of the prosthetics was revised several times during the past year, with the latest version, made out of nylon using SLS Technology and lifting him up to what would be his “normal” height. “Our goal was to maintain the same adaptive curve at the prosthetic’s point of contact with the ground so Derby could pivot and play as before, while also attempting a knee-like structure to provide the appropriate amount of give for the new height.”

Watch the video below to see how Derby is getting on with his new 3D printed prosthetics: