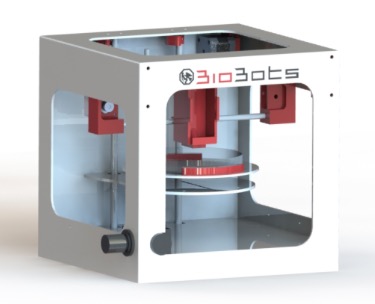 BioBots has announced the launch of its desktop 3D bioprinter at the 2015 TERMIS World Congress in Boston.

Having undergone a 9-month-long testing period with beta partners at selected tissue and biomedical engineering institutions around the world, the 3D bioprinting system is now available for $ 10,000.

Its open cartridge system allows researchers to either purchase pre-prepared bioink kits for common tissue types or use their own materials. The 3D printer includes a dynamic dual-extruder system, which deposits materials layer by layer, that are then cured using its patented visible light technology. This way three dimensional living tissue can be created. So far, researchers at the beta testing universities were able to create bone, liver and brain tissues from living human cells. In the following video you can see the BioBot 3D printer producing an aortic valve:

BioBots was founded in 2014 by University of Pennsylvania graduates Daniel Cabrera and Ricardo Solorzano. Their goal was to create an affordable 3D bioprinting system to produce functional tissue.

With the official release of BioBot 1, they now make the result of their work available to researchers worldwide. “The digitization of biology has made it the exponential technology of our generation, we’re excited to see the tools we build in the hands of amazing people that are engineering biology and pushing the human race forward,” said co-founder and CEO Daniel Cabrera. He continues: “Our incredible team at BioBots is driven by the mission of engineering biology. To build the BioBot 1, we partnered with some of the most brilliant minds in tissue engineering, and together we’ve developed the world’s most accessible biofabrication technology. This is one of many steps that we’re taking towards democratizing the ability to build with life, and the ramifications are game changing. With the BioBot 1 comes the ability to build 3D living tissues that can be used to reduce the time and cost of developing new drugs, 3D living tissues that can be used to personalize therapies, 3D living tissues that can be implanted into patients and 3D living tissues that can be studied to explore the largest mystery of our generation – life. We can’t wait to see what else people will build now that a BioBot can sit on every lab bench around the world.”