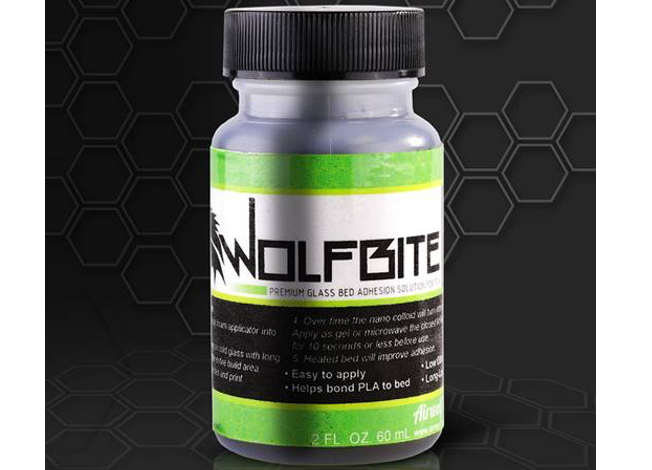 October 30, 2014: According to the manufacturer the so called warpage effect can be avoided by applying the Wolfbite solution on the build plate. Not only will this guarantee the adhesion of the print but the object can also be easily removed afterwards, leaving a clean and smooth bottom surface.

A single coat of the solution applied with an applicator brush is supposed to last for several prints. The 60 ml (2 oz) bottle is available on Airwolf 3D’s website for an introductory price of $ 19.99 and will last for over 100 uses.

After releasing WolfBite for ABS materials back in October last year, Airwolf has just introduced a new product that can be used for PLA prints.

Called WolfBite Nano, the product is also applied directly to the glass surface with an applicator brush.

“This is a new, environmentally friendly solution for resolving the acute problem of PLA-based 3D printing, part adhesion and warpage. The solution is based on a combination of green chemistry and nanotechnology to create the best possible adhesion using compounds which are generally regarded as safe,” said Professor Miodrag Micic, who developed WolfBite Nano in collaboration with Airwolf 3D.