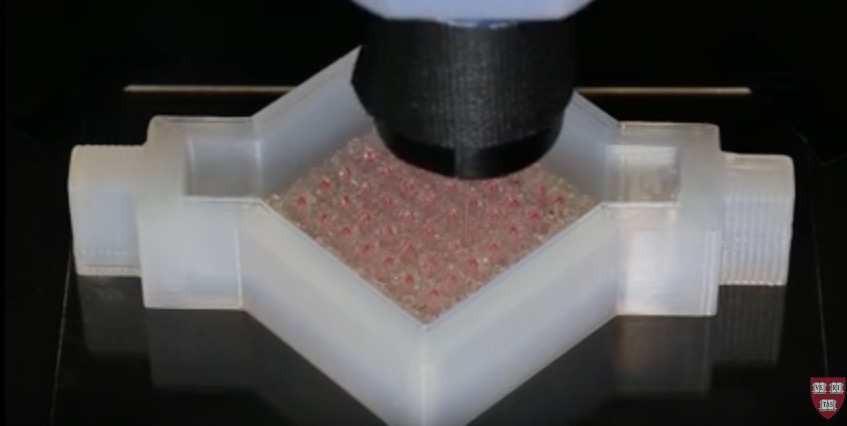 In order to sustain functional living tissues, a network of blood vessels for transporting nutrients to the cells is essential. Thus, so far researchers were not able to create thick tissues, as there was not method to embed these vascular networks into the printed tissues.
Now, a research team at the Harvard John A. Paulson School for Engineering and Applied Sciences (SEAS) and the Wyss Institute for Biologically Inspired Engineering at Harvard University has been able to create thick vascularised tissue using a new method of 3D bioprinting. This could lead to 3D printed human tissues for drug safety and toxicity screening and ultimately could be used for tissue repair and regeneration.

The tissues structure composes of human stem cells, extracellular matrix, and circulatory channels that are lined with endothelial blood vessel cells. This network of vasculature enables fluids and nutrients to flow through the tissue.

Jennifer A. Lewis, founder of the Harvard spin-off Voxel8 with their electronic 3D printing platform, is senior author of the study. The method developed by Lewis and her team uses a printed silicone mould, that houses the tissue structure. First a grid of vascular channels is printed, with an ink containing living stem cells following. At the intersections of the grid, vascular pillars are then printed to interconnect the micro vessel network. At last, a liquid composed of fibroplasts and extracellular matrix fills in the open regions around the 3D printed tissue and links the whole structure, which is then perfused with nutrients through an inlet and outlet on the opposite ends to ensure the survival of the cells. 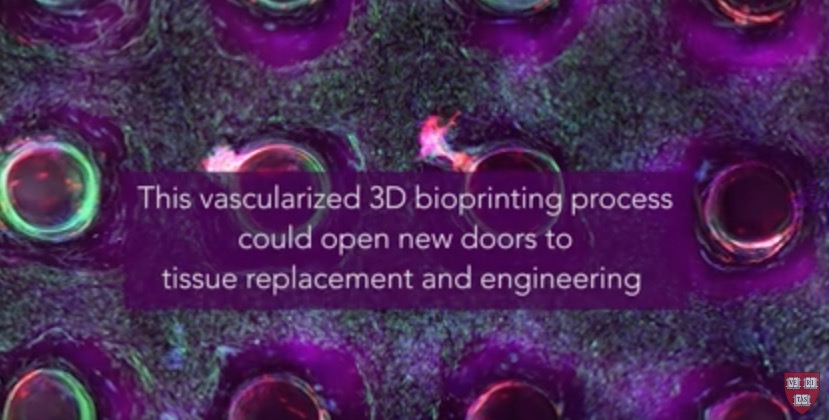 “This latest work extends the capabilities of our multi-material bioprinting platform to thick human tissues, bringing us one step closer to creating architectures for tissue repair and regeneration,” explained Jennifer A. Lewis.

While in their study the team demonstrated the method by 3D printing one centimetre-thick tissue containing human bone marrow stem cells, the cell inks can be tuned to include a variety of cell types. Moreover, the shape of the silicone mould can be customised.

Wyss Institute Founding Director Donald Ingber, M.D., Ph.D., who is also the Judah Folkman Professor of Vascular Biology at Harvard Medical School and the Vascular Biology program at Boston Children’s Hospital, and Professor of Bioengineering at SEAS, said: “Jennifer and her team are shifting the paradigm in the field of tissue engineering based on their unique bioprinting approach. Their ability to build living 3D vascularized tissues from the bottom-up provides a potential way to form macroscale functional tissue replacements that can be surgically connected to the body’s own blood vessels to provide immediate perfusion of these artificial tissues, and thus, greatly increase their likelihood of survival.  This would overcome many of the problems that held back tissue engineering from clinical success in the past.”

The paper titled “Three-dimensional bioprinting of thick vscularized tissues” was published in the Proceedings of the National Academy of Sciences journal.