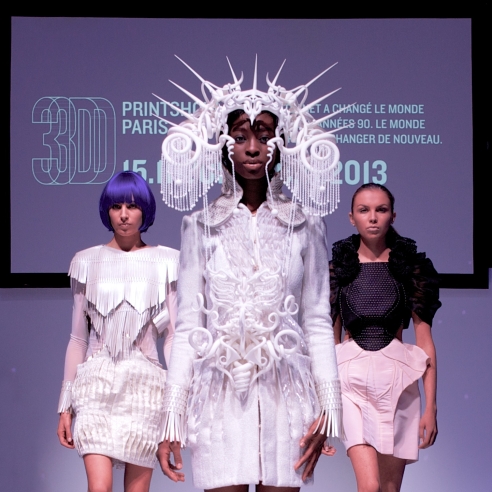 Chicago-based artist and longtime proponent of 3D-printed art and sculpture, Joshua Harker, made his runway debut at the 3D Printshow in London and Paris in 2013. The event heads to New York in mid-February of this year. Harker’s first piece of “wearable art,” a headdress laser sintered on an EOSINT P 760 additive manufacturing (AM) system, served as the anchor of 3D Printshow’s fashion show, held at the Business Design Centre in London’s Borough of Islington and Carrousel Du Louvre in Paris.

The all-plastic headgear, which pays homage to traditional ceremonial headdresses of Native American and African tribes, consists of a variety of interwoven and suspended components. After Harker dedicated over 100 hours of design time, EOS was able to print the entire piece in less than 26 hours.

Harker also debuted a nearly 2000-piece kinetic sculpture manufactured using EOS laser-sintering technology and displayed other items from his creative portfolio at the show.“I have used EOS’ technology considerably in my pieces because I have to. It’s one of the very few that allows me to produce my creations without problematic issues of cleanup, rigid support and other technicalities after the build is finished,” Harker says.

“It helps me do what I do without being burdened by manufacturing considerations.”Harker identifies himself as an artist trying to push the boundaries of 3D printing. His portfolio is full of complex designs and intricate geometries, many of which could only be manufactured through AM. He believes that others in both the art and fashion industries will soon realize the capabilities of 3D printing and begin to take advantage of them.

“3D printing is a process that allows you to create things that can’t be done any other way,” Harker says. “Whether it’s fashion or art or anything, really, when you’re imagining things and the constraints of what you can make are gone, it changes a lot of things. Designers are really going to have a lot of powerful new avenues to explore with this technology.”

3D Printshow took place in London and Paris in November 2013 and will be in New York February 13-15, 2014. In addition to the fashion show there are exhibits and presentations focused on medical, architectural, educational and other applications of 3D printing.