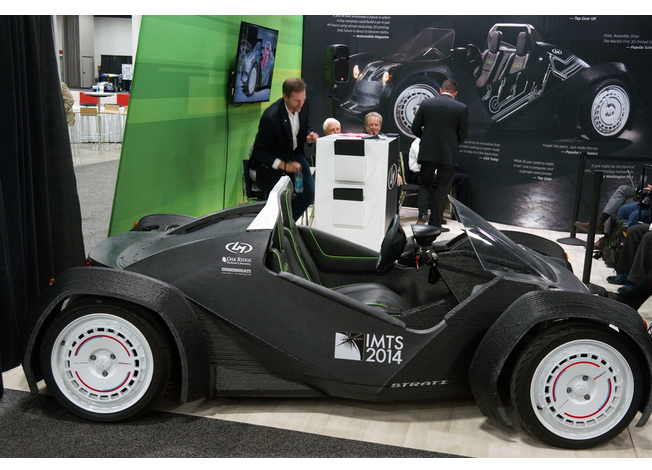 At the North American International Auto Show (NAIAS) in Detroit the automotive company Local Motors has announced the opening of two new micro-factories for the production of 3D printed cars.

Strati had first been introduced at the IMTS in Chicago back in September last year. It was 3D printed on site within 44 hours, using a carbon fibre reinforced ABS material. The Big Area Additive Manufacturing Machine (BAAM) made by Cincinnati Inc. in collaboration with Oak Ridge National Laboratory is capable of extruding about 18 kg of printing material per hour.

Local Motors announced it will open two micro-factories in the US States of Maryland and Tennessee.

John B. Rogers, Jr., Co-founder and CEO: “Since launching in 2007, we have continuously disrupted the way vehicles are designed, built, and sold. We paired micro-manufacturing with co-creation to bring vehicles to market at unprecedented speed. We proved that an online community of innovators can change the way vehicles go from designed to driven. We pioneered the concept of using direct digital manufacturing (DDM) to 3D-print cars. I am proud to have the world’s first 3D-printed car be a part of our already impressive portfolio of vehicles.”

The sites will only be 40,000 square feet (3,700 square meters), providing space for a build floor, a lab and a showroom. The locations are set to break ground in the third quarter of 2015, with the first 3D printed cars to be delivered shortly after. Stratis’ estimated retail price is anywhere between $ 18,000 and $ 30,000.