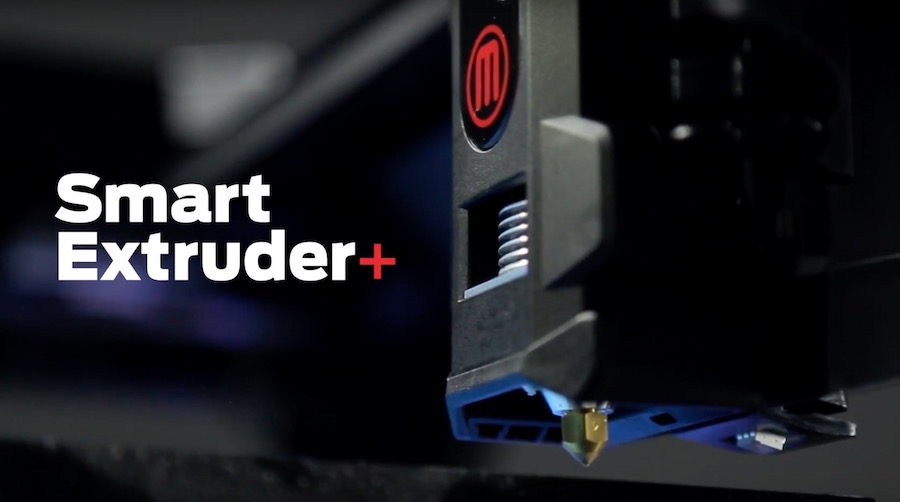 MakerBot, a global leader in the desktop 3D printing industry, today announced the MakerBot Smart Extruder+, a new swappable extruder for Fifth Generation MakerBot 3D Printers that is designed and tested for better print performance over a longer period of time.

With improved components and an enhanced sensor system, the Smart Extruder+ is designed to provide a streamlined and reliable printing process from start to finish. MakerBot worked closely with its parent company, Stratasys, to put the Smart Extruder+ through extensive product testing and help verify its performance by two independent teams.

“The advances we made with the MakerBot Smart Extruder+ are a big step forward and set a new benchmark in 3D printing,” said Jonathan Jaglom, CEO of MakerBot. “The extruder is the most critical part of a 3D printer and it is a part that wears out after a certain period of time and needs to be replaced. We engineered and tested the Smart Extruder+ to enhance its reliability, provide better performance and extend its lifetime. And we stand behind it by doubling our warranty to six months. Because it is swappable, the Smart Extruder+ can also reduce downtime when it’s time to replace it.”

MakerBot collaborated closely with its parent company Stratasys on the development and testing of the Smart Extruder+, benefitting from Stratasys’ 25 years of industry experience. MakerBot’s product testing initiative spanned over 160,000 cumulative hours – or 18 years – of print time. A total of 5,800 prints were completed by two groups – one at MakerBot and one at Stratasys – to help ensure independent verification of the results. In these tests, the Smart Extruder+ performed consistently and reliably for over 700 hours on a MakerBot Replicator Desktop 3D Printer, which equals 1.44 miles of MakerBot PLA Filament. In fact, over 90 percent of test units were still printing successfully at 1,200+ hours of print time. Generally, the rate of wear on extruders has many variables and is dependent on how it is used and the settings it’s configured for over time. MakerBot backs up its commitment to quality by doubling the warranty of the Smart Extruder+ to six months with no limit to the amount of MakerBot PLA put through the extruder, so customers can print with confidence.

The Smart Extruder+ features improved key components to ensure longer-lasting reliability, such as an enhanced thermal management system and an extended PTFE tube to feed the filament into the nozzle. Additional improvements include faster print start up and refined build plate leveling, the process of calibrating a 3D printer. The smart sensors within the extruder have been enhanced for better performance and to streamline the printing process from start to completion – which can save time and money. The Smart Extruder+ sensor system communicates with MakerBot Desktop and MakerBot Mobile to keep users informed about the status of a print wherever they go. For example, the filament detection sensor notifies users – on their computer or mobile phone – when filament is absent and automatically pauses a print to enable print recovery.

The streamlined printing process of the Smart Extruder+ can be especially beneficial in the classroom.

“The reliability and ease of use is huge for us; it provides more students access to our MakerBot Desktop 3D Printer,” said Nicholas Provenzano, a teacher at Grosse Pointe Public Schools in Michigan, who has been using the MakerBot Smart Extruder+ for several weeks. “Our students print all day in our library and I can’t always be there to assist them. The MakerBot 3D Ecosystem, and especially the Smart Extruder+, makes it easy for our students to turn their ideas into physical objects. It lets them focus on the design process, which is most beneficial for their education.”