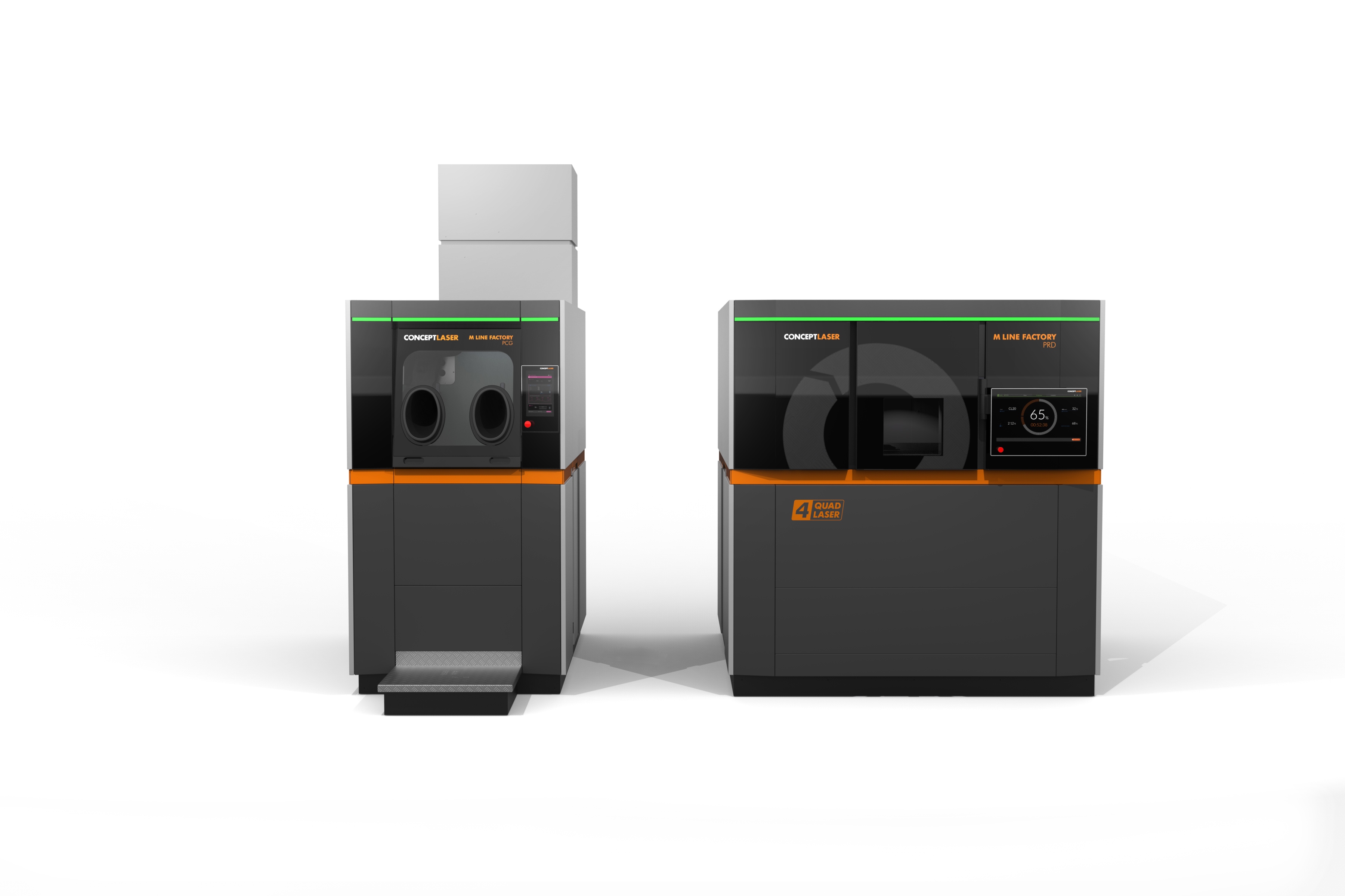 Just the announcement of the new machine architecture at formnext powered by TCT 2015 created a stir in the AM sector. This year then saw the commercial launch of the product under the name M LINE FACTORY. For the first time, part production as well as set-up and dismantling processes will take place in two independent machine units so that they can be operated physically separate from one another. This now enables production processes to run in parallel rather than sequentially so that downtimes are considerably reduced and the availability and output quantity of the process chain is thus increased.

But the technology leader from Lichtenfels already has a new innovation target in its sights: The machinery and plant manufacturer announced, in a cooperation with Swisslog, that it is integrating an automated guided vehicle (AGV) for the automated movement of modules, e.g. powder and components. Visitors were able to admire the first results at Concept Laser’s exhibition stand. Further highlights were the premiere of the Mlab cusing 200R in the small machine segment and the presentation of the X LINE PCG in the large machine segment, as an option for the convenient and secure removal of the powder following the production process. As well as the availability of new precious metal alloys, a new product was also unveiled in the area of the QM modules. The new laser power meter, QM Cusing Power, now enables the laser power to be measured directly on the build area.

New M LINE FACTORY is intended to boost 3D metal printing
The long-awaited commercial product launch of the new machine architecture from Concept Laser, the M LINE FACTORY, took place during the course of formnext powered by TCT 2016. This heralds a completely new approach in machine architecture and offers an unprecedented level of automation and innovation.  For the first time, part production as well as set-up and dismantling processes will take place in two independent machine units so that they can be operated physically separate from one another and can be combined however you desire. This now enables production processes to run in parallel rather than sequentially so that downtimes are considerably reduced and the availability and output quantity of the process chain is thus increased.

The M LINE FACTORY PRD, as the production unit, has a max. build envelope of 400 x 400 x 425 mm³ (x,y,z) and is optionally equipped with 1 to 4 laser sources, each delivering 400 W or 1,000 W of laser power. The core of the unit is three independent modules, the dose module, the build module and the overflow module, which can be individually activated for the first time and therefore do not form one continuous unit. The individual modules are moved via a tunnel system inside the machine. This means that, for example when new powder is supplied, the empty powder storage module can automatically be replaced by a new module immediately without the build process necessarily needing to be interrupted, as was previously the case. Finished build jobs can now also be moved out of the machine with the dedicated module and replaced directly by a new prepared build module so that production operations can be resumed immediately. Furthermore, a new 2-axis coating process has been implemented and this permits the return run of the coater to be performed alongside the exposure without the spatter problems that usually arise in the market today with systems that coat in both directions. This results in a substantial saving on time during the coating process in combination with a pursuit for the highest quality. Also under preparation is the integration of an automated tool changing system, as is the case with CNC machine technology, which promises flexibility as well as time advantages when setting up the machine, and further reduces the level of manual intervention by the operator.

The physically separate, autonomous M LINE FACTORY PCG is available as the processing unit for set-up and disarming processes. This enables “optimum use windows” right through to the ideal of 24/7 availability of the machine technology. The new processing unit has an integrated sieving station and powder management. There is now no need for containers to be used for transportation between the machine and sieving station. Unpacking, preparations for the next build job and sieving therefore take place in a self-contained system without the operator coming into contact with the powder. An automated material flow is another unique selling point. This allows self-contained modules for transport and material provision to be used.

The associated software suite CL WRX 3.0 includes various user roles with different authorization levels which enables operator-specific, transparent control and monitoring of all process operations. In addition, it is an open structure with interfaces to CLS, ERP, machine technology and automation technology. The intention is that the system should also be able to integrate remote diagnosis, service monitoring and later also diagnostic devices. Another advantage is the connectivity with different output media such as panels, PCs, laptops, or smartphones that an employee can use to stay on top of things.

The modular machine technology of the M LINE FACTORY forms the core of Concept Laser’s “AM Factory of Tomorrow” concept which also makes provision for upstream and downstream stages of the production process as well as links to conventional manufacturing methods. The concept consistently implements the basic idea of “Industry 4.0” in the form of automation, interlinking, and digitization, and thus permits the economical series production of additive metal components.

Machinery and plant technology: Premiere of the new Mlab cusing 200R
In addition to its long-standing successful model, the Mlab cusing R, at formnext powered by TCT Concept Laser has now unveiled its “big brother”, the Mlab cusing 200R. This makes it possible to manufacture even larger parts with much greater productivity, without the machine losing any of its familiar compactness. The absolute highlights of this new development include:

The intuitive design of the display enables the machine operator to quickly get to grips with things in maintaining an overview of the process. The provider paid particular attention to the sieving of the powder. For the Mlab cusing 200R, Concept Laser offers an inertized sieving station as a stand-alone unit (QM Powder S). QM Powder S enables independent and automated sieving alongside the production process. The user can apply a variable number of sieves (1 – 3 units). A three-dimensional sieving motion enables optimum utilization of the open sieve surface area. Safety was of course right at the top of the development list for the Mlab cusing 200R: The new model has water-floodable filter modules and involves physical separation of the process and handling chambers, which is typical for Concept Laser and ensures maximum safety and easy handling. The concept of the closed system was a must-have for the Mlab 200R: All process steps take place under inert gas, shielded from external influences. The whole process can therefore be called up reliably and with the maximum quality level.

New QM module: Laser power meter QM Cusing Power
The area of quality assurance and monitoring has been one of Concept Laser’s core areas of expertise for many years. It is no surprise then that our development department works feverishly to come up with new solutions in this field. For formnext powered by TCT, the company has now unveiled its latest tool, QM Cusing Power. This tool now enables the laser power to be measured directly on the build area. The core of this new concept is a compact measuring device with a digital display. This measuring device can be used with all machines from Concept Laser (from machine software version 2.0.3.5). An adapter plate for each type of machine enables easy handling. The features of QM Cusing Power include:

The measurement takes place under inert gas and no additional cooling is required.

Peripherals: Presentation of the X LINE PCG unpacking station
With the X LINE 2000R, Concept Laser not only offers the machine with the world’s largest build envelope, but also provides the unpacking station to go with it in the form of the X LINE PCG. This is recommended as an optional addition to the previous model, the X Line 1000R. It makes it possible to easily clean components within an inertized chamber. It is used for removing powder even in highly complex cavities and open support structures and for returning it to the powder circuit. The X LINE PCG makes it possible to clean components within the inertized process chamber. The programmed pivoting about two axes allows the component to be rotated on the platform and reliably removes the excess powder with a rotary movement. This aspect of automation allows the manufacturing process to proceed faster and more effectively.

The processing parameters are provided by Concept Laser, the materials themselves are to be procured from the relevant powder manufacturer. 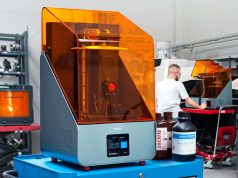 Sep 22, 2022
We use cookies to ensure that we give you the best experience on our website. If you continue to use this site we will assume that you are happy with it.OkRead more