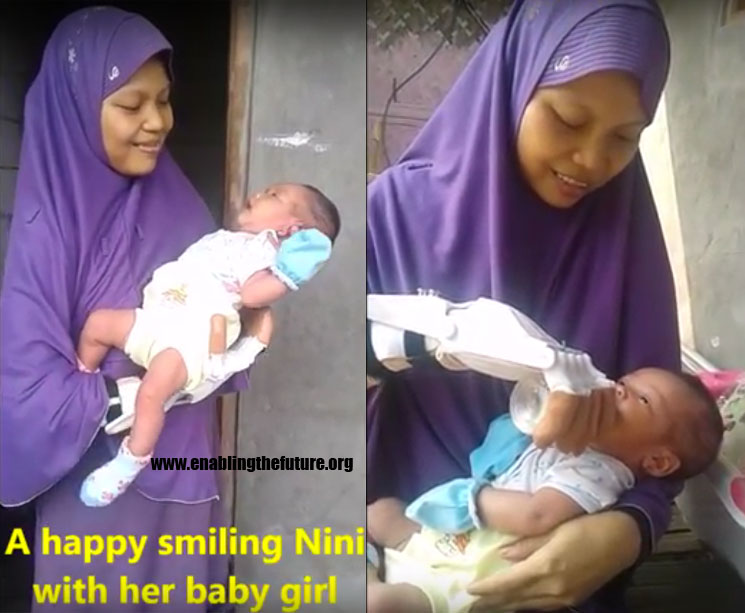 This week’s inspiring e-NABLE story comes from Indonesia, where a young mother received a 3D printed hand to help her care for her baby daughter.

Christian Schild had been involved in support projects for patients affected by leprosy through his Rotary Club Jakarta Sentra. Through a video shared on his son’s Facebook page, Christian learned about e-NABLE and their work.

Among the people he had helped was Ali Sage, a former leprosy patient who started a prothesis workshop in an Indonesian village and introduced Christian to Nini. The young woman had lost all her fingers on her right hand in an accident at a plastics factory. Since she was expecting a child in December 2015, he wanted to make sure Nini would be able to care for her baby and was determined to find a solution.

After attending an office machine exhibition held in Jakarta, where 3D printing companies were present, he got into contact with several volunteers: “It started with Heri Kristanto of PT Indoprint in Surabaya, who offered to make one hand. Shortly after this, I was called by Wadi Chan of 3D Solution here in Jakarta. Wadi has a 3D printing business and is very familiar with the technology and suggested we make a Raptor/Osprey hand.”

It took the team about two months to create the hand for Nini, as it was difficult to source materials and hardware needed in order to assemble it. Since Christian and Ali were able to fit the e-NABLE hand to Nini before her child was born, she was able to practice.

Check out the video below to see how Nini is feeding and holding her baby daughter:

“This will be a great help for many people who have lost their hands,” Christian shares. “3D printing is still new here in Indonesia and not many companies are doing this kind of work. Together with Heri, Wadi, Ali and Trisweni, we hope to be able to extend the production of the hands into more regions in Indonesia in the future. Our aim is to promote and arrange seminars and training programs for more people to be able to make these 3D printed hands.”