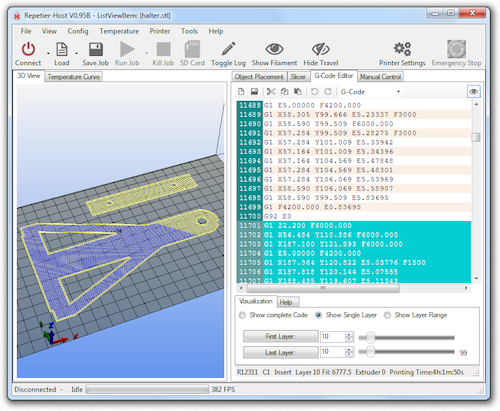 In order to design and print a 3D model it has to pass numerous applications. First of all you need a design software which can convert the file into a suitable format (e.g. STL). Afterwards the model needs to be sliced in order to be printable.

17.03.2014 – For the printer to be able to read it you will need a *.GCode file. This file has to be double checked for its printability and finally it will be transferred to the 3D printer via SD card. To simplify this process there are so called host programs.

Onc of these programs is Repetier-Host. It does not allow the creation of models, however takes care of all the other steps. 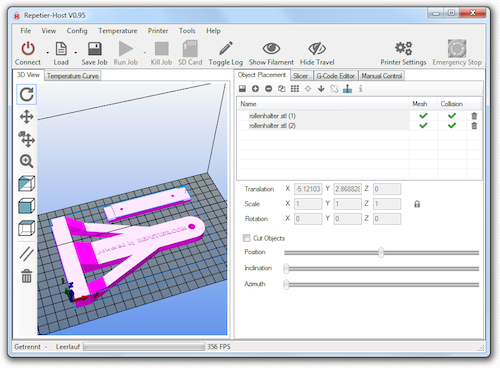 A 3D model is imported as *.STL file and at the other end of the cable the printer is about to start its job. Unfortunately it is not as simple as that yet, nevertheless it roughly describes the process possible at the moment. The object needs to be manually placed on a virtual build plate, then the slicing and GCode file should be double checked before printing.

The main advantage of the host is the consistent interface so you don’t have to deal with the ever changing menu navigation and buttons of Slicer, GCode-analyser and other applications. The only disadvantage is that the printer has to be connected to the hosting computer which must be switched on during the whole printing process.

After losing MakerBot, yet another member is about to drop out of the Open Source Community. Repetier Host changed its terms of services and now no longer Open Source.

An allegedly company spokesman explains in the RepRap Forum:

We tried the open source model for over 2 years. User contributions were very low, so nearly all work was done by us. So we ended working 10 hours a day 7 days a week which we could not spend earning money. In addition other used our work for their profit without sharing it with us. Fortunately not all companies go that way. Quite some printer vendors support us with custom host version and we believe this step will even increase the number of supporters, so we can keep a free host version with new features. The alternative would be to stop developing the host, which would be even more lost to the community.