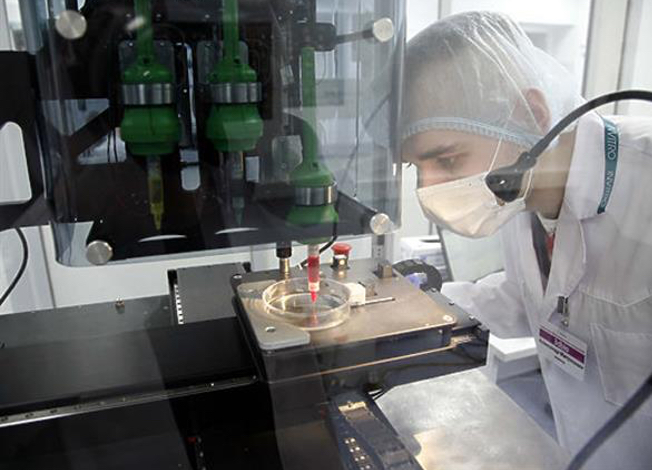 Researchers from the Russian laboratory 3D Bioprinting Solutions revealed plans to be able to 3D print living organs by March 2015.

November 10, 2014: The team lead by Vladimir Mironov will first attempt to create a thyroid gland due to its simple structure. By using stem cells as ink and hydrogel as scaffold, the organ will be 3D printed on their own developed bioprinter. Professor Mironov hopes the thyroid gland will prove compatibility with living organisms.

“We’ll start with mice. We already have a plan how to test it: we’ll shut off the thyroid with radioactive iodine, which will cause the level of hormones in the organism to drop. We’ll then transplant the printed structure, and if the level of hormones gets back to normal, we will be celebrating with champagne,” Mironov told Komsomolskaya Pravda (KP) daily.

After revealing their results on 15th March 2015 the teams has plans to create functional 3D printed kidneys in 2018.

“The one who will be the first to print and then successfully transplant the kidney to the patient – who will stay alive – will for sure get a Nobel prize,” said Mironov.

Following their announcement back in November last year, researchers of 3D Bioprinting Solutions in Russia revealed the latest results of their project during a press conference that took place last week.

The first ever 3D printed thyroid gland of a mouse was created on the company’s proprietary bioprinter. The organ will shortly be implanted into a living mouse suffering from hypothyroidism. Once this process has been successfully completed, the condition of the mouse will be evaluated and the results of the study will be revealed at the Second International Bioprinting Congress in Singapore on July 9th to 10th.

According to 3D Bioprinting Solutions, their 3D printed thyroid glands had been not only been successfully implanted into mice, but also proven to be fully functional.

“We had some difficulties during the study, but in the end the thyroid gland turned out to be functional,” said Dmitri Fadin, development director at 3D Bioprinting solutions, in an interview with RBTH.

The results of the study are to be published next week.