As the name implies, Slic3r is one of the many open source projects that focuses on slicing 3D models into printable layers.

Since two and a half years Slic3r has been available for free download. Its a solid solution for many different 3D printer. Moreover Slic3r supports exceptional features like multiple extruders and brim-mode. Using multiple extruders you can control multiple print heads during a print job. 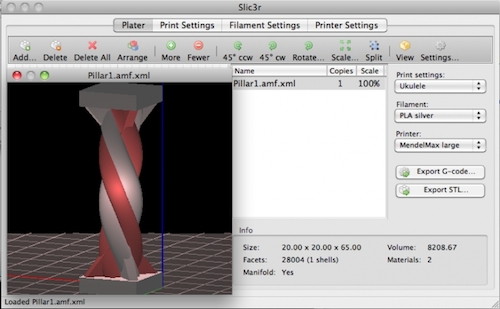 Brim-mode creates a thin brim around the object on the printing platform, which enhances the adhesion during printing and it can be removed easily afterwards. Due to it’s easy handling, the open source concept and innovative features, Slic3r is one of the most popular Slicer for hobby user. You can find an an extensive manual for all the functions on Slic3r.org.

After 10 month of work, a new stable version of the open source slicing software has been released. Here is a short summary of a few of the new features and improvements:

Incremental real-time slicing: When settings are change, slicing doesn’t restart from scratch but only recalculates the affected parts.

3D Honeycomb infill: David Eccles has created a new infill pattern that varies across the Z-axis.

Integration with OctoPrint: Files can now be uploaded to the popular web-based print server OctoPrint.

Rotate/mirror/scale/flip: Objects can be manipulated in all axes before slicing or exporting them.

The new version of Slic3er can be downloaded here.