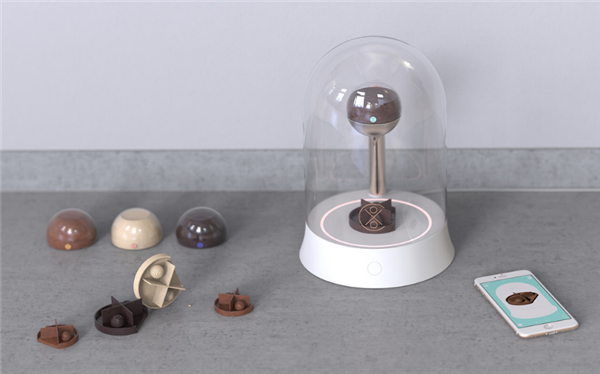 Many of us love chocolate, the delicious sweet is available in different shapes, colours and tastes. Since 3D printing has become as popular as it is now, a lot of people have thought about 3D printing chocolate. The XOCO is just another new approach for this idea and it has a new particular design.

The original idea for the XOCO was suggested by Nikhil Velpanur. Later the idea was again used by the Dutch design studio Micheal Cornelissien Ontwerp. They developed a design that’s worth a look. The XOCO 3d-printer is based on a polar coordinate system with a rotating build plate and a single pillar from which both printhead and glass cover are suspended. So you can watch your chocolate objects while they are created. The XOCO can be controlled over a smartphone app but it’s not yet known how models for 3D printing are created. Special attention is given to the LED ring that provides feedback to the user.

XOCO is currently still in the conceptual development stages but has a really nice, modern and clear design. It’s is unclear if the chocolate 3D printer will even be produced. More information about the design and the idea behind it are available on the Website of Micheal Cornelissen Ontwerp.