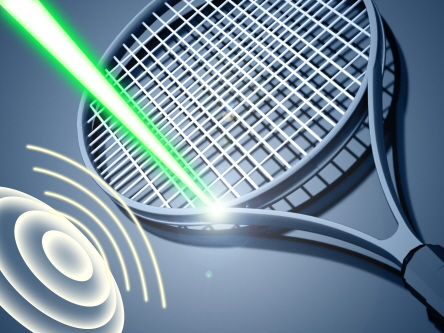 A team of engineers at the University of Bristol has developed a new method to 3D print composite materials.

The study published in the Smart Materials and Structures journal, describes a method that uses ultrasonic waves to position millions of tiny reinforcement fibres as part of the 3D printing process. The fibres are formed into a microscopic reinforcement framework to strengthen the material. The microstructure is then being set in place by a focused laser beam, that locally cures the epoxy resin and then prints the object. The orientation of the fibres can be controlled by switching the ultrasonic standing wave pattern mid-print. Using this new technique, the researchers were able to achieve a print speed of 20 mm/s, which is similar to conventional additive layer techniques.

PhD student Tom Llewellyn-Jones developed the system, where a switchable focused laser module was mounted on the carriage of a standard three-axis 3D printing stage, above the new ultrasonic alignment. “We have demonstrated that our ultrasonic system can be added cheaply to an off-the-shelf 3D printer, which then turns it into a composite printer”, Llewellyn-Jones explains.

Bruce Drinkwater, Professor of Ultrasonics in the Department of Mechanical Engineering, adds: “Our work has shown the first example of 3D printing with real-time control over the distribution of an internal microstructure and it demonstrates the potential to produce rapid prototypes with complex microstructural arrangements. This orientation control gives us the ability to produce printed parts with tailored material properties, all without compromising the printing.”