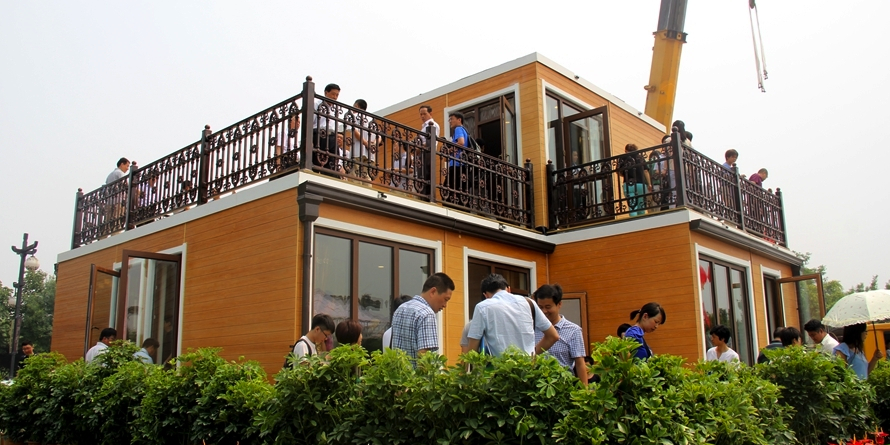 The Chinese company Zhuoda group has unveiled a two-story 3D printed home which was assembled at the International Exhibition Center Plaza in Weihai City last week.

July 20, 2015 – The six different modules were set up in only three hours using a crane. Each module had been completed prior at the factory, including wiring, plumbing, kitchen, furniture and other interior decoration. In fact 90% of construction work for this house took place at the company’s factory.

Not many details have been revealed about the method and materials used to create this modular home. The Zhuoda group has filed a total of 22 patents for the process and materials used in order to manufacture the modules, which are strong enough to withstand earthquakes with a magnitude of 9.0 and are also water- and fireproof. The materials are sourced from agricultural and industrial waste and do not contain any ammonia, formaldehyde, radon or other harmful substances. The homeowner would be able to choose from a variety of decors such a wood, jade or marble. With an approximate weight of 100 kg/m2, the modules cost only 3,500 RMB (€ 520) per square meter according to the company’s vice president Tan BuYong.

Which parts of these modules have actually been 3D printed we cannot tell from looking at the pictures. However, the price and speed involved certainly provides an effective and cost saving way to construct buildings. According to reports, Zhuoda group has already signed more than 40 contracts for local government projects.

January 19, 2016 – Update: Suspicion rises that everything was just a scam

As Chinese media warns investors of a investment scheme about the company Zhuoda – which claims to produce a house mostly with 3D printed parts and assemble that house in only three hours – the suspicion of fraud rises even higher.

The company announced that they are holding 22 patents to protect their new technology in July 2015 and showed how the house was assembled. That led to an immense hype in media around the world. A lot of investors jumped on board to get a pice of the promised annual return of 30%. As Quartz (Link below) reported, over $1.57 billion were invested in Zhuoda from over 400.000 individual investors.

Zhuoda reported that it had collected orders for 3D printed modular homes worth $313 billion and also won a contract with the Russian government worth another $94 billion. That’s the size of China’s total trade volume with Russia in 2014. Quartz (Link below) summarised Chinese news, that the Russian Embassy in China doesn’t know about any contract with Zhuoda.

We will keep you updated on future investigations.