At the conference Microsoft held for the new Windows 10 operating system yesterday, they also unexpectedly unveiled the groundbreaking HoloLens. 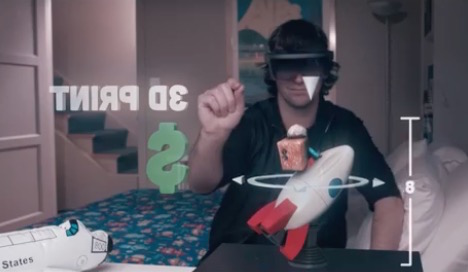 Developers haven’t announced a release date yet, however, once launched it could revolutionise CAD modelling.

At the Build 2015 conference Microsoft unveiled new features of their HoloLens. During a presentation hosted by Joe Bilfiore, Corporate Vice President, Operating Systems Group at Microsoft, a Rasperry Pi-powered robot rolled onto stage. The robot, appearing as a holographic robotic avatar through the HoloLens, was controlled by vocal and gesture commands.

The following video gives more insight into the its hardware:

Among Microsofts partners for the HoloLens, such as Disney, Autodesk and NASA, is SketchFab. They have created a 3D image of the AR device:

So far Microsoft has not revealed a release date or price of the HoloLens. Visitors of the Build 2015 were able to explore the features of the AR device for the first time: