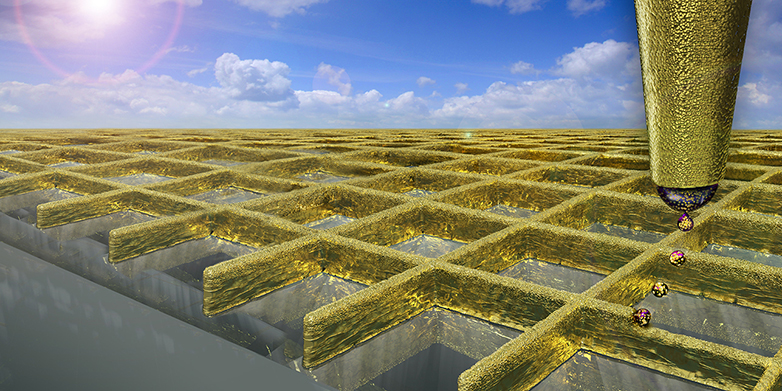 Researcher from ETH Zürich and Scrona, a spin-off of the university, managed to develop a technology for placing nano drops.

This so called NanoDrip technology was used to produce the worlds smallest inkjet picture with a size of only 80×115 nanometers (nm).

The scientists now used this technology to produce structures in the three-dimensional space. They built a grid of tiny walls of gold and silver. These walls are only 80 to 500 nanometers wide, which means that when you look at them from above you won’t be able to see them. This makes the technology perfect for producing touchscreens and solar panels.

To archive a high conductivity the team printed four layers of the material. That makes this technique even better suitable than current ones used. At the moment indium tin oxide is used because it delivers a high transparency but at the cost of conductivity. That limits the size of touchscreens and the accuracy.

If you want to achieve both high conductivity and transparency in wires made from these metals, you have a conflict of objectives. As the cross-sectional area of gold and silver wires grows, the conductivity increases, but the grid’s transparency decreases.

The NanoDrip technology was invented three years ago based on the electrohydrodynamic ink-jet printing. Ultra-small droplets of metalic ink are drawn out of a glass capillary using electrical fields.