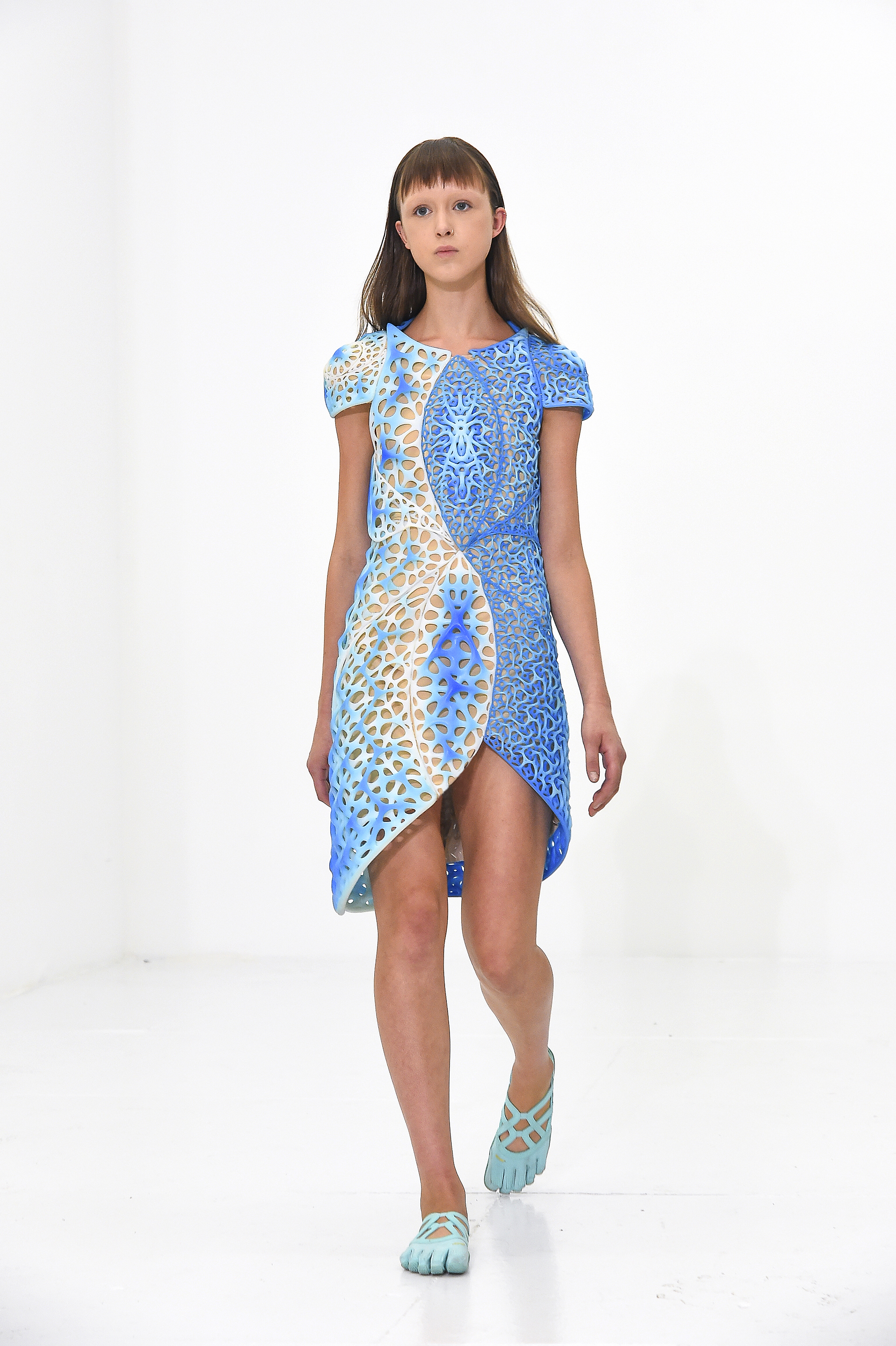 “3D printing is transformative for designers aiming to take complex designs and realize them as a wearable garment. In the case of ‘Oscillation,’ Stratasys 3D printing enabled us to visualize 3D patterns as they truly are – complex, interwoven circles of energy, transforming in shape, color and flexibility as they radiate around the body,” explains Adi Gil, threeASFOUR. “The stellar parallax of the patterns, the way in which they transform as the viewing angle changes, is only possible through 3D printing.” 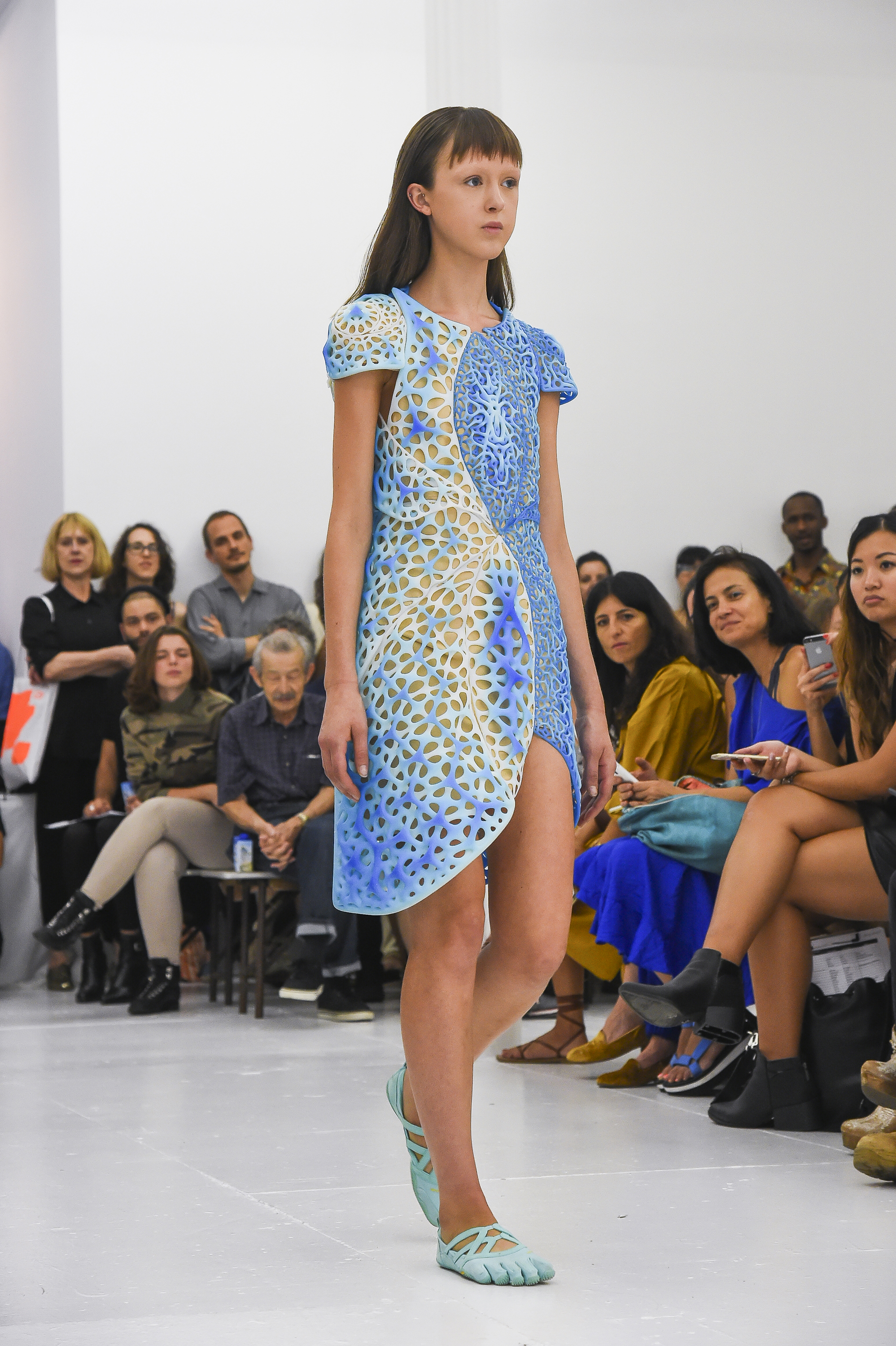 The 30 unique dress components were initially printed as flat, unwrapped patches that were later assembled on the body. With Stratasys’ color, multi-material 3D printing capabilities, including advanced precision and the ability to vary material properties, the designers were able to recreate even the most intricate vibrational patterns and geometries without compromising the flexibility and wearability integral to the design.

Having previously taken inspiration from natural, biological forms, threeASFOUR designers – Gabi Asfour, Angela Donhauser, and Adi Gil – continue to reference this theme in their latest works. ‘Oscillation’ draws from an interplay of energies evident both within the body and across the wider universe. As the third collaboration with Stratasys, ‘Oscillation’ follows the debut of the landmark 3D printed ‘Pangolin’ and ‘Harmonograph’ dresses in the designers’ Fall/Winter collection at New York Fashion Week earlier this year. These first 3D printed pieces were key to threeASFOUR’s successful ‘Biomimicry’ collection, spurring threeASFOUR to further test the extensive potential of Stratasys’ 3D printing technology.

As Gil explains, the designers have now been able to push this technology even further to create the new 3D printed ‘Oscillation’ dress, produced not only in varying material thicknesses, but also in a spectrum of vivid color gradations: “The bio-inspired coloration, corresponding to fluctuations in shape and size, is only achievable with Stratasys PolyJet 3D printing technology. As the nodal patterns thicken, scale, and undulate, the color gradations respond accordingly to accentuate the geometry. Using a vivid color range, we were able to construct a multi-dimensional textural surface; a screenshot of a dynamic, oscillating waveform.”

To effectively produce the gradated coloration, each print was digitally split into nine layers of less than one millimeter in thickness. Individual layers were assigned a particular mixture of color and flexibility for the overall effect, with nearly 300 separate design files used to complete the landmark project.

“At Stratasys we are continually reflecting on aesthetic discoveries to help creative minds explore uncharted grounds in contemporary art and design that can be realized with our 3D printing technology,” comments Naomi Kaempfer, Creative Director, Stratasys. “With ‘Oscillation’, we are inviting our audience to explore abstract universal ideas and thought changing concepts, and bringing these to life in three dimensions and vivid color. With forward-thinking projects such as this, threeASFOUR has set an example in design innovation, and has continued to transform the way people think about fashion.”