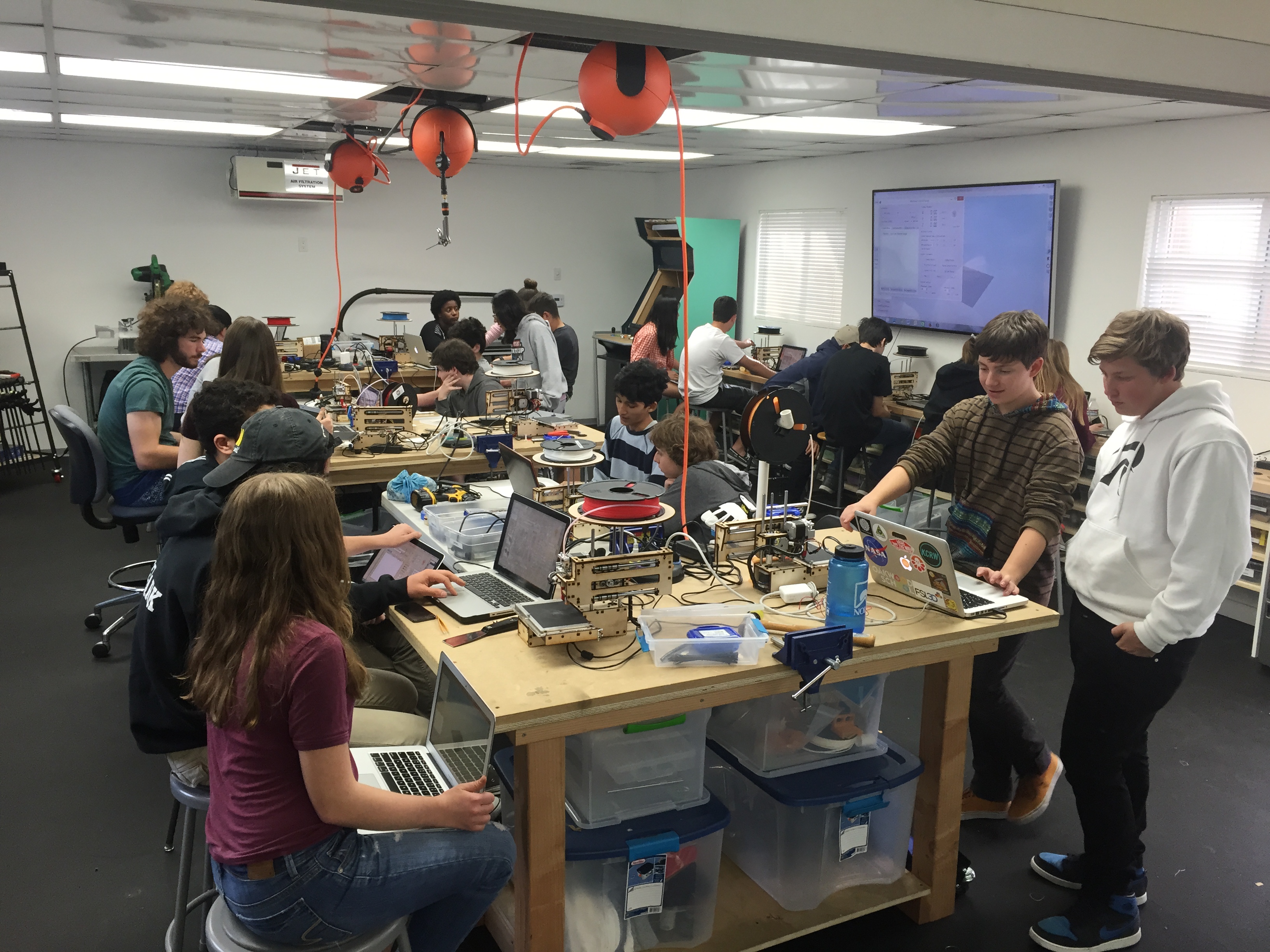 New technology, growing minds, and students helping other students – all the ingredients for an inspiring story! That’s exactly what is taking place at Oakwood School in North Hollywood, CA, where students and STEAM Department Chair Marcos Arias have created a unique STEAM education experience focused on 3D printing.

Oakwood has pioneered a “cascading” approach, allowing older students to share 3D printing knowledge with younger students. Oakwood high schoolers become the initial 3D printing experts by building their own Printrbot kits to understand the mechanics of the technology. Then, they learn to control all aspects of their printing process using Simplify3D Software. After they have developed this solid foundation, the high-schoolers share their knowledge with other Oakwood students in the school’s Immersion Program, an intense two-week program outside of their regular academic schedules. The students refer to the process of sharing their expertise with other groups as “cascading knowledge” or “transfer of knowledge.” 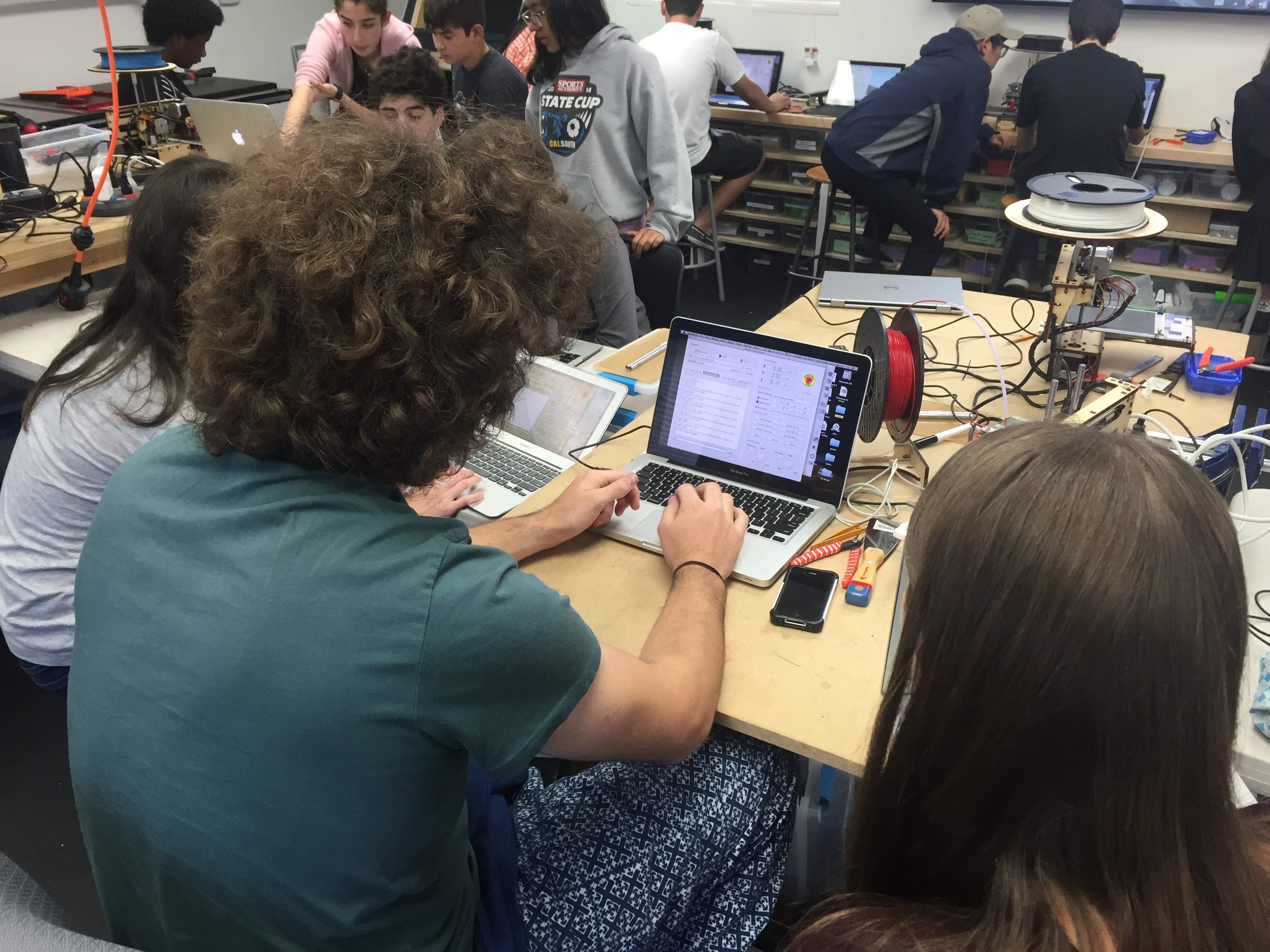 These opportunities aren’t just fun and informative – they teach students how to solve problems in new, creative ways and generate excitement about STEAM-related careers.  The Oakwood Immersion Program received a technology infusion in 2009 when Oakwood instructor Marcos Arias was looking to bolster opportunities for his students in the fields of engineering, architecture, and design. Initially, he offered technology based two-week immersion classes, and by 2012, Oakwood devoted an entire department to STEAM concepts and classes. As Marcos explained, “My department is constantly changing. To stay relevant with new technologies, I spend a great deal of time researching what studies we should add next, and 3D printing was on my radar.” In 2014, Marcos enlisted the help of an interested student, and together, Marcos and Lucas P. tested whether an Immersion Class could be structured around 3D printing. Over the summer, Marcos gave Lucas a Printrbot Simple kit along with a challenge: could Lucas build the kit himself and produce successful 3D prints?

That summer, Lucas worked diligently to build his 3D printer. With minimal prior knowledge about 3D printing, he mostly relied on guidance from the Internet to run his printer. Lucas finally completed the first print on his newly built Printrbot late one night that summer. “It was all wiry and the layers weren’t sticking,” said Lucas, “But I thought to myself that even if this is the best my printer can do, this is still the coolest thing I’ve ever done.”

After understanding the problems that Lucas encountered, Marcos understood that he would need a more predictable learning experience for a two-week immersion class to be successful. First, they agreed that building a printer from a kit was foundational to understanding the underlying mechanics of the printer. As Marcos explained, “The learning process would not be as powerful without this construction and experimentation component.” The next thing they addressed was software. 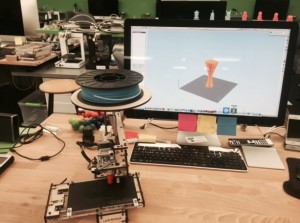 Marcos researched options and determined that he needed software that was flexible and easy to learn, but that would still allow the students to have full control over all their print settings. As Marcos explains, “Simplify3D met and exceeded all of these requirements. My students have what they need for an easy startup experience, but they also have the software tools to advance to more complicated printing projects.” His students are able to work through many of their problems independently using online resources, including the Simplify3D Print Quality Troubleshooting Guide, which can be especially useful to solve common 3D printing issues in the classroom.

After the high-schoolers build and master the use of their Printrbots, they act as Teaching Assistants for the next Immersion class of seventh, eighth, and ninth graders. The class has gained so much popularity among Oakwood students that signups for this academic year were more than triple the program’s capacity. Luckily, there are plans to add a “How to Build a 3D Printer” camp during their summer program in 2016 to accommodate additional students.

Tenth-grader Zoe K. became involved in last year’s Immersion program as a Teaching Assistant and was inspired to cascade her knowledge beyond Oakwood. She had previously volunteered at a nearby charter school called Valor Academy, and knew they did not have access to the same hands-on science learning opportunities as she did at Oakwood. Zoe organized an outreach for Valor Academy’s fifth grade students.

The goal of the outreach was to provide a brief introduction to 3D printing and spark the students’ thinking about all the possibilities inherent in the new technology, and to inspire interest in STEAM careers and dreams. As Zoe explained, “The response from the students during the first class was incredible. Their awe and curiosity, their excitement about the possibilities, and their interest as to how the 3D printers worked allowed me to experience the same wonder I felt when I first saw a 3D printer in action.” Through the outreach program, Zoe and her classmates opened up the exciting world of 3D printing to more than 100 elementary students in during the 2014-2015 academic year.

Printrbot, Simplify3D, BuildTak, and Polymaker have all contributed resources and materials to the Oakwood Immersion. Each company loves helping educators and students around the world gain expertise in 3D printing technology, so that younger generations will be prepared for whatever the future holds.