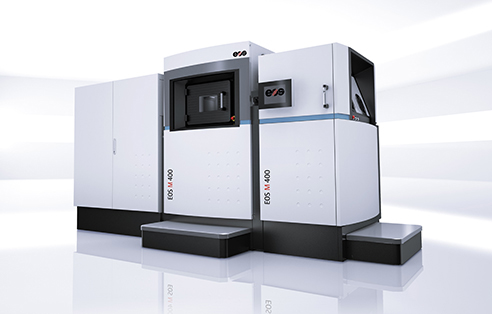 EOS, the global technology and quality leader for high-end Additive Manufacturing (AM) solutions, is showcasing the EOS M 400, the additive manufacturing system it launched last year for industrial series production, at Booth E 148 in Hall 11 at this year’s EuroMold. With this new system generation EOS is pursuing a platform-based strategy for the metal segment. Customers can use it in research, development and series production.

Dr. Adrian Keppler, Sales and Marketing Director (CMO) at EOS, adds, “With this modular, extendable platform design, we are fulfilling the requirements of those customers who work in a series production environment. In 2014 we put the platform through its paces with intensive practical tests in close cooperation with pilot customers. The pilot phase has now been completed and the customer feedback we have received proves that we are providing new impulses for series production with this metal-based, additive system concept.” He continues, “The EOS M 400 itself is now going into series production. The high demand for the system has significantly exceeded our expectations.”

Pilot customer Citim: achieve greater productivity, larger components with the EOS M 400
Following conclusion of the pilot phase, Andreas Berkau, Managing Director of Citim, one of the leading service providers for the production of prototype models and small series especially on the basis of Additive Manufacturing, comments as follows: “The EOS M 400 system is a consistent further development of existing system technologies which fulfils numerous expectations on a new manufacturing system – such as increasing process stability and productivity and the possibility of manufacturing even larger components. A significant increase in productivity can be expected with this system technology, particularly for the manufacturing of aluminium components.”
EOS M 400: Modular, increased automation, improved quality assurance
As well as manufacturing larger components, the EOS M 400 system also facilitates significant increases in productivity and a continually improved degree of automation. The new system generation stands for optimized quality assurance and operability and thus fulfils the requirements of customers in the series production environment.
While the EOSINT M 270, EOSINT M 280 and EOS M 290 models have already set technical benchmarks, the EOS M 400 goes a step further. The new system supports users not only within the context of qualifying EOS technology for manufacturing, but also in real manufacturing applications. The platform will be gradually expanded by further high-performance modules, providing users with a future-proof Additive Manufacturing solution that is custom-designed and can be expanded in a modular way.

With a volume of 400x400x400 mm, the EOS M system has a significantly larger build size for realising new applications in industrial series applications. The first expansion stage for the basic version will initially be offered with the materials EOS Aluminium AlSi10Mg and EOS NickelAlloy IN718, making it suitable for use in the automotive and aerospace industries in particular. Processes for further materials are under development. The system has a laser with a power of up to 1000 watt which allows the use of new materials that require a higher laser capacity. A recirculating filter system with automated self-cleaning allows for fewer filter changes and longer lifetime. This significantly reduces filter costs. EOS has further optimised monitoring and reporting functions so that users can further optimise quality checks in an industrial environment. As far as operability is concerned, the system not only offers powder-free operation but also automatic unpacking and automatic powder treatment.