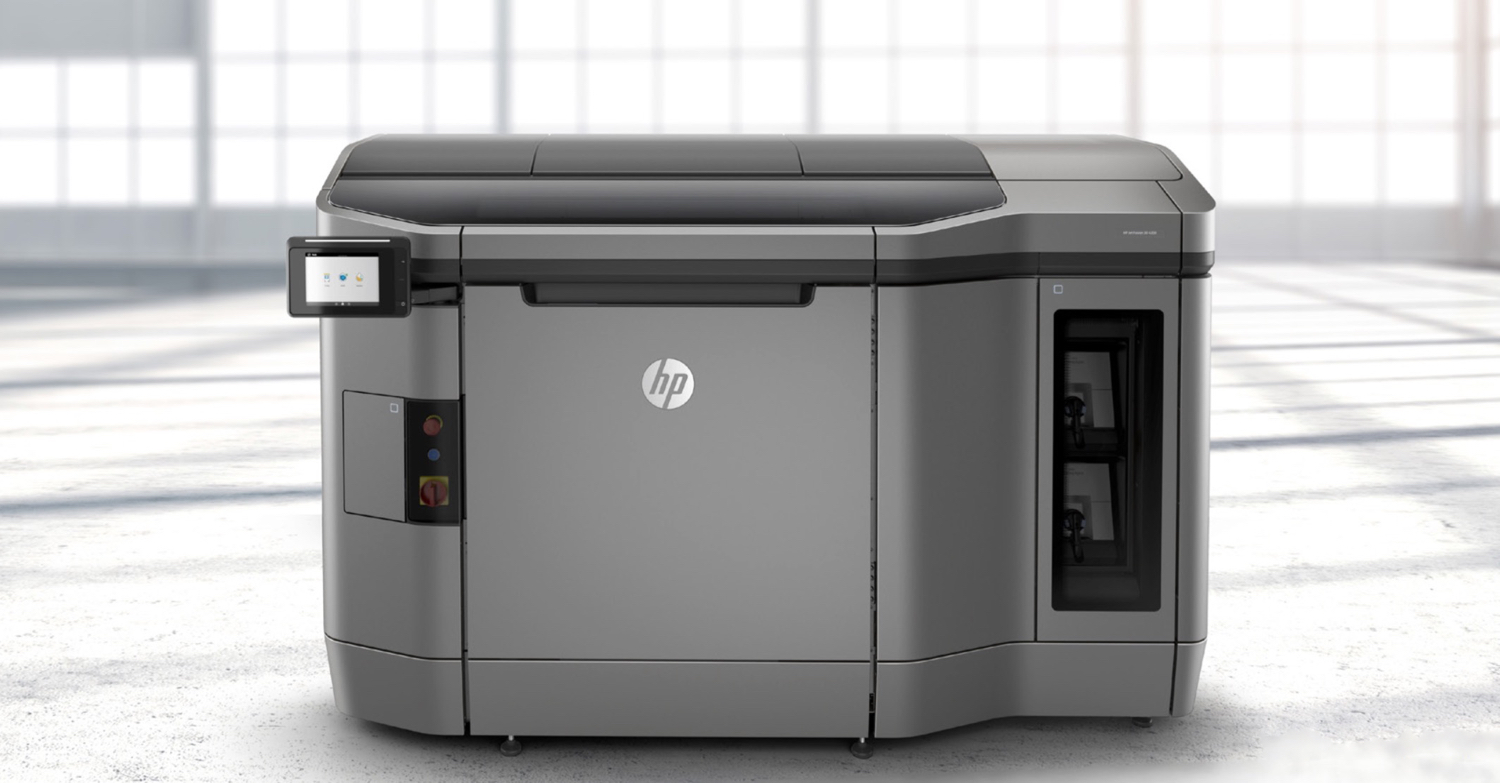 We have been waiting for this moment for quite some time – HP’s first 3D printer, that has been announced by the company’s President and CEO Meg Whitman in 2013 with the words “We will have something by the middle of next year“, now officially launches.

Today, HP introduces two 3D printers including corresponding Processing Stations. The HP Jet Fusion 3D 3200 and 4200 3D printers are based on the company’s proprietary Multi Jet Fusion technology, that uses an HP Thermal Inkjet array to print chemical agents across a thin layer of powder laid down in the working area. The two agents, deposited in micro-sized droplets, do not only act as a binding material but also feature different thermal conductivity. While the heat conducting agent fuses the actual object, the detailing agent is selectively applied where the fusing action needs to be reduced or amplified. In a next step, infrared light sources above the working area fuse each layer. The detailing agent reduces fusing at the boundary in order to produce a print with sharp edges and smooth surfaces.

At the beginning of May I was invited by HP to join them in Barcelona for a presentation of their new printers. Unlike my expectation to see a rather small device, HP’s printing systems measure more than two meters in lengths and are nearly one and a half meters tall (2178 x 1238 x 1448 mm). Additionally, two different Processing Station are available.

HP has not only developed a 3D printer but a complete production system. Their team demonstrated the ideal production process involving the Processing Station and the Multi Jet Fusion 3D printer:

Check out the illustration below to follow the production process: 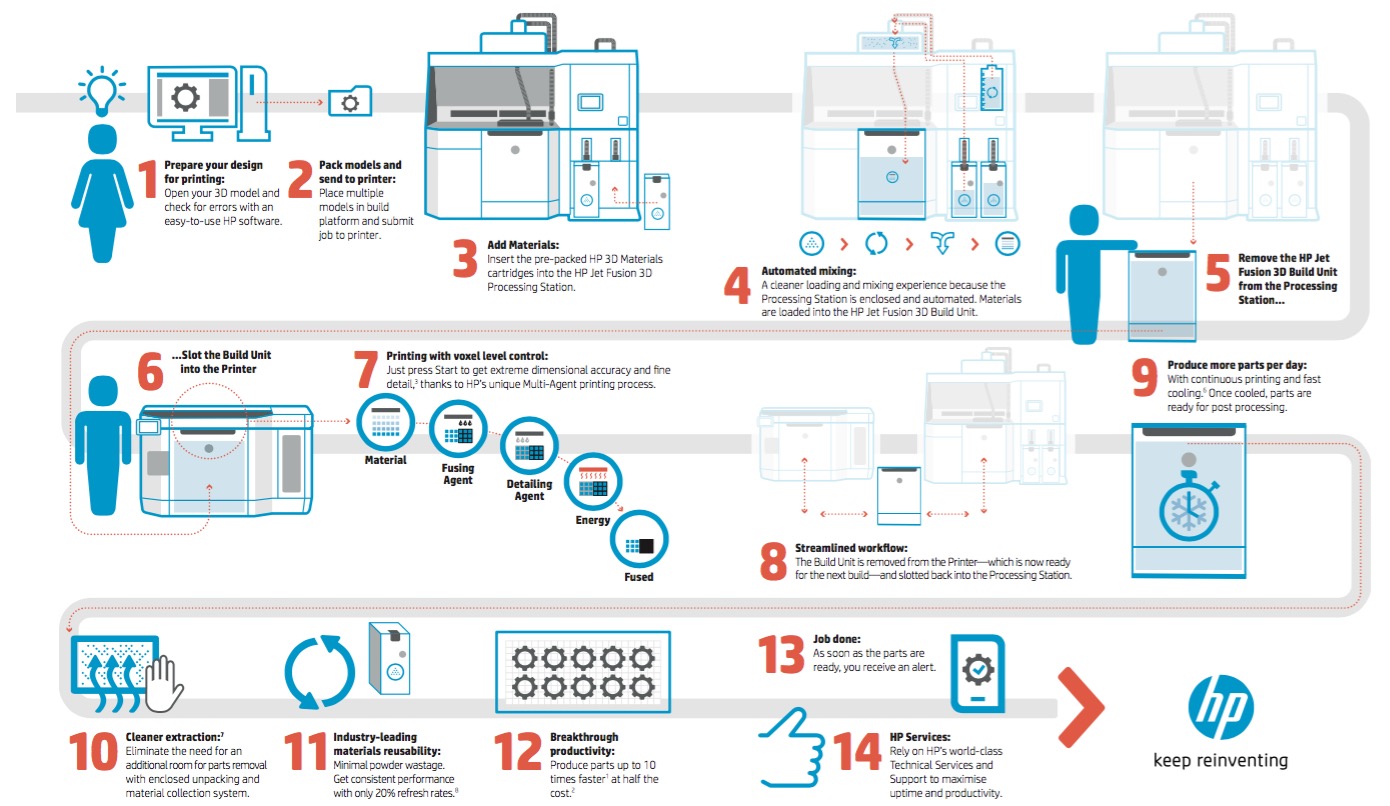 The Processing Station is available in two different models, with the station for the HP Jet Fusion 3D 4200 additionally offering Fast Cooling. This further shortens the cooling process and enables higher throughput. Thanks to the completely closed system equipped with a ventilation system no breathing masks are required.

The first material released by HP this year is black PA12. According to the manufacturer up to 80% of the unfused PA12 material can be recycled for reuse. HP has already announced earlier this year that their Multi Jet Fusion technology will be open for third party materials. In the course of our meeting and presentation in Barcelona, HP has also announced some companies that are already working on new materials for the Multi Jet Fusion technology.

Currently, companies including BASF, Lehmann&Voss&Co, Evonik and Arkema are collaborating with HP to develop materials. The technology supports a variety of materials with different properties. Among others, the companies are working on coloured materials, PA11, flame retardant polyamides, high-temperature materials, higher rigidity polyamides (PA12 Glass Beads) as well as elastomers, additional thermoplastics and commodity plastics.

Material properties such as strength, transparency and different surface qualities can be changed for each voxel. Unlike SLS technology, the energy source used in Multi Jet Fusion technology can be applied to materials for a much longer time. According to developers, this leads to better component properties that can transform 3D printing from a technology producing prototypes to a technology used for actual manufacturing.

For the software HP teamed up with Autodesk (Netfabb) and Materialise (Magics) in order to streamline the production process. Additionally, the HP SmartStream 3D Build Manager and HP SmartStream 3D Command Center ensures a smooth and efficient process.

HP’s 3D printers support STL and 3MF file formats, while their focus is set on 3MF, with the support of STL file format to be discontinued in future.

Whether HP will be able to achieve its goals in the field of additiv manufacturing is still written in the stars, however, I believe their development and statements are a vision of the future in a yet highly innovative industry.