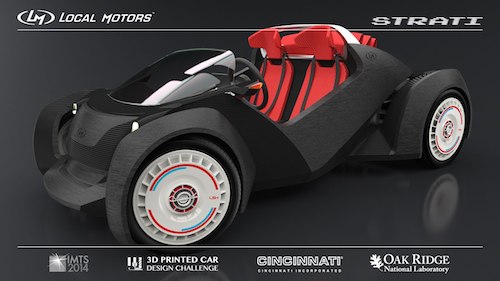 The American motor vehicle manufacturing company, Local Motors, is about to make their 3D printed cars available for pre-order through Indiegogo.

The winning design of the company’s Project REDACTED competition, Reload Redacted by Kevin Lo, will be ready for delivery early next year and can be pre-ordered for the cost of $ 18,000 to $ 30,000 this coming October. A high-speed version of the car for freeways will probably be ready by the end of 2016 and cost around $ 50,000.

Their first 3D printed car “Strati” was manufactured at the IMTS in Chicago last year. The company then announced the opening of further Microfactories in the US as well as Berlin, representing their headquarter in Europe. While collaborating with several universities in the US for research and development, Local Motors is currently also testing new materials for 3D printing car parts.

“I’ve got the machines. You’ve got the brains. Let’s bring the chocolate and the peanut butter together and let’s make better cars every four months,” said Rogers of the company’s open-source mentality.”

Rogers added: “We want the development time, which is currently about six years, to come down to about four months. Digitally manufacturing a car allows us to adopt new technology as soon as it comes out. That’s what people desire.“