Home Press Releases Blueprints for the Next Generation of SLM Systems 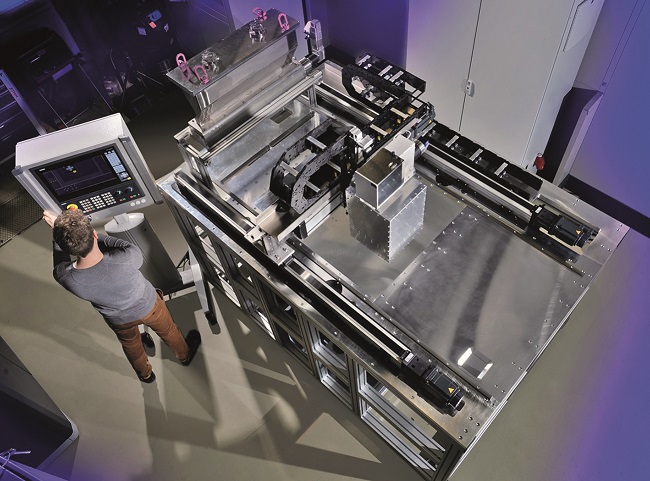 Additive manufacturing is becoming increasingly important in industrial production. Decisive factors are the scalability of the build volume and the productivity of additive manufacturing systems. Against this background, scientists at the Fraunhofer Institute for Laser Technology ILT are further developing the selective laser melting (SLM) technology. To this end, a new SLM laboratory system was built in Aachen. With an effective utilizable build volume of 1,000 mm x 800 mm x 500 mm, the system is able to manufacture large metal components quickly and with high process reliability. Fraunhofer ILT will be presenting ideas and process videos about the new system at the 2017 formnext trade fair from November 14 to 17.

Established inert gas suction strategies are no longer effective for a very large build volume. Instead, the scientists at Fraunhofer ILT are basing their approach on small, movable processing heads with a local shielding system, which ensures a constant stream of inert gas at every processing point for build volumes of any size.

At Fraunhofer ILT, scientists are testing systems with fiber lasers as well as exposure concepts with cost-effective diode lasers. In addition to their research into established scanner systems with mirrors, they are also investigating a moving processing head with highly dynamic linear axes and several individually controllable diode lasers. The advantage of this multi-spot processing is the ability to significantly and cost-effectively increase the system’s build-up rate by increasing the number of beam sources. With the new system concept, it is also possible to increase the build volume solely by extending the travel length of the axis system – without changing the optical system. According to Tenbrock: “Because both optical systems have their characteristic pros and cons, we will continue to pursue both approaches.”

The research findings will give machine manufacturers a foundation upon which to develop and build the next generation of SLM systems. “We hope that the system concept will lead to a breakthrough in the successful use of this technology in series manufacturing,” says Tenbrock. The easy scalability of SLM systems is a powerful argument for the concept: because there is no need to adjust the shielding gas system and the optical system, it is easier than before to adapt the build volume to the respective application. “We create process conditions that are constant and easy to control, thereby improving process robustness,” continues Tenbrock.

Another important point – particularly for system developers – is that the scientists at Fraunhofer ILT develop not only the system technology, but also the parameters for efficient process management. “The added value is created through intelligent strategies for exposure and path planning as well as suitable process parameters,” explains Tenbrock. The long-term goal of this development is not just to open up new applications for SLM but also to tackle challenges such as internal stresses and distortion of SLM parts. Above all, the new system concept shall make it possible to manufacture functionally optimized SLM structural components on an XXL scale for demanding sectors such as the aerospace, automotive and tool and mold making industries – in accordance with the new trends in lightweight design and functional integration.

Using process videos, the ILT scientists will be demonstrating how the new laboratory system is able to swiftly manufacture XXL components with high process reliability at the joint Fraunhofer booth F50 in Hall 3.0 at the formnext trade fair from November 14 to 17, 2017 in Frankfurt.