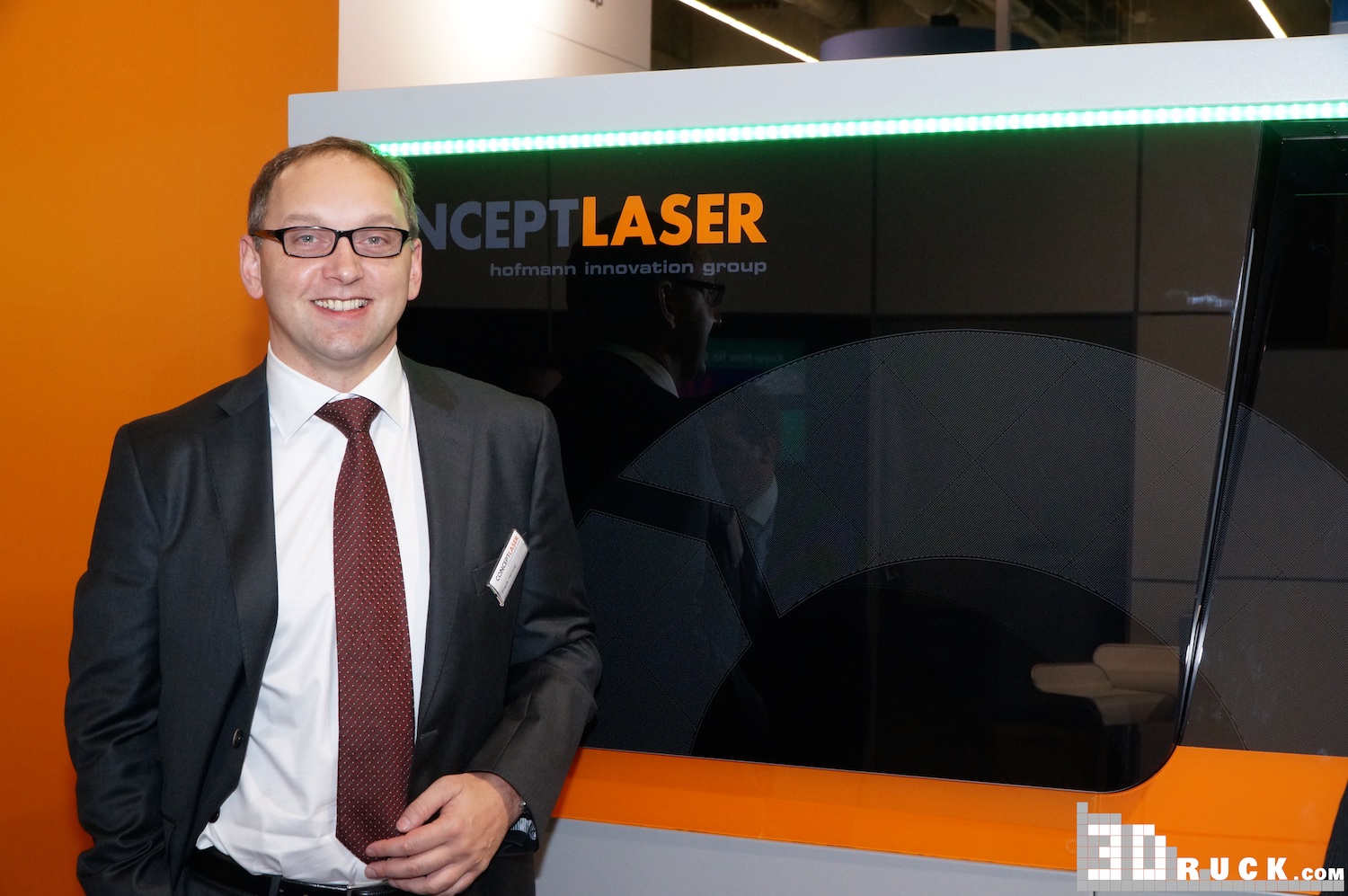 Together with his two project partners, Frank Herzog, founder and CEO of the specialist for 3D metal printing, has been nominated as a candidate for the German Future Prize 2015. His inclusion in the “circle of the best” is another milestone in the anniversary year of Concept Laser GmbH.

The German Future Prize is the Federal President’s Award for Innovation and Technology. It is awarded to developers from industry and science who have rendered outstanding services with projects and initiatives to Germany as an innovation location. With his nomination, Frank Herzog is now “among the best”. Frank Herzog: “After the awards in 2014 (e.g. Bavaria’s Best 50) and the Final of the German Industry’s Innovation Award, this nomination is a great honor to me. Not least, it is also appreciation of the enormous potential of the LaserCUSING process developed by me.”

The project with the title “3D Printing in Civil Aircraft Manufacturing – a Production Revolution is Taking Off” convinced the jury of the German Future Prize 2015 with regard to its degree of innovation and economic implementation. And the project team, consisting of Peter Sander, Head of Emerging Technologies & Concepts at Airbus, Hamburg, Prof. Dr.-Ing. Claus Emmelmann, CEO of Laser Zentrum Nord GmbH, Hamburg and Frank Herzog, founder and CEO of Concept Laser GmbH, Lichtenfels was therefore nominated for the German Future Prize 2015. The project is mainly about the first additively manufactured titanium component, referred to as a “bracket”, on board the Airbus A350 XWB. It is a “bionic” holding and connecting element, which is regarded as an important contribution to the lightweight construction of aircraft. This cross-industry development is revolutionizing the way structural aircraft components are made and “lightweight construction” is implemented in civil aircraft. This component was previously a milled part made of aluminum (Al) and is now a printed part made of titanium (Ti) with a weight reduction of approx. 30%.

Success by means of pioneering spirit
Frank Herzog is regarded as a pioneer in the field of powder bed-based laser melting. The existing plastic sintering technology led to development of the LaserCUSING method in 1998. During his studies Frank Herzog thought that what worked with plastics should also work with metals. Part stress and the failure of metal powder to fuse completely were initially the greatest challenges in the process development. However, these problems were overcome by the hard work put into the development of stochastic exposure and the application of a solid-state laser.
This pioneering work resulted in the founding of the company Concept Laser in the year 2000, which presented its M3 linear prototype machine to the public at the Euromold in Frankfurt in 2001 and, in this way, celebrated its world premiere in the field of industrial 3D metal printing. Concept Laser, which is situated in Lichtenfels in Upper Franconia, were able to supply the first systems worldwide only a year later. Once an exotic outsider, this additive manufacturing strategy has taken over a wide variety of industrial fields and applications over the years. Over 400 systems installed worldwide speak for themselves. And 15 years of Concept Laser also means 15 years of successful process development with numerous innovations and patents. For example, the company now has its own research and development department with over 50 employees. Furthermore, Concept Laser GmbH is involved in numerous research and development partnerships with universities, technological and scientific institutes and industrial companies. And the company is also the owner of more than 50 granted patents. Concept Laser GmbH has currently approximately 100 pending patent applications and a majority of them will be granted in the near future. The number of inventions applied for patents by the company has been steadily growing. Concept Laser’s 15th anniversary in 2015 is a brilliant performance – and it has the figures to prove it. The growth of + 75 % in 2014 is being consolidated by Concept Laser at a high standard. For example, a total of 110 laser melting systems were delivered in the year 2014. This figure is to rise to 150 systems in 2015. This means growth in sales of + 35% is expected compared to the previous already very successful year.

The LaserCUSING process
The term LaserCUSING, composed of the C from CONCEPT Laser and the English word FUSING (to fully melt), describes the technology. The fusing process uses 3D CAD data to generate components layer by layer. This process allows the production of complex component geometries without tools in order to implement geometries as components that are difficult or even impossible to achieve with conventional manufacturing methods. The LaserCUSING process is used to create mechanically and thermally stable metallic components with high precision. Depending on the application, it can be used with stainless and tool steels, aluminum and titanium alloys, nickel-based superalloys, cobalt-chromium alloys or precious metals such as gold or silver alloys. With LaserCUSING, finely pulverized metal is fused using a high-energy fiber laser. The material is solidified after cooling. The component contour is created by directing the laser beam by means of a mirror deflection unit (scanner). The component is constructed layer by layer (with each layer measuring 15-150 μm) by lowering the bottom surface of the build space and then applying and fusing more powder. Concept Laser systems stand out due to their stochastic control of the slice segments (also referred to as “islands”), which are processed successively. The patented process significantly reduces tension during the manufacture of very large components.