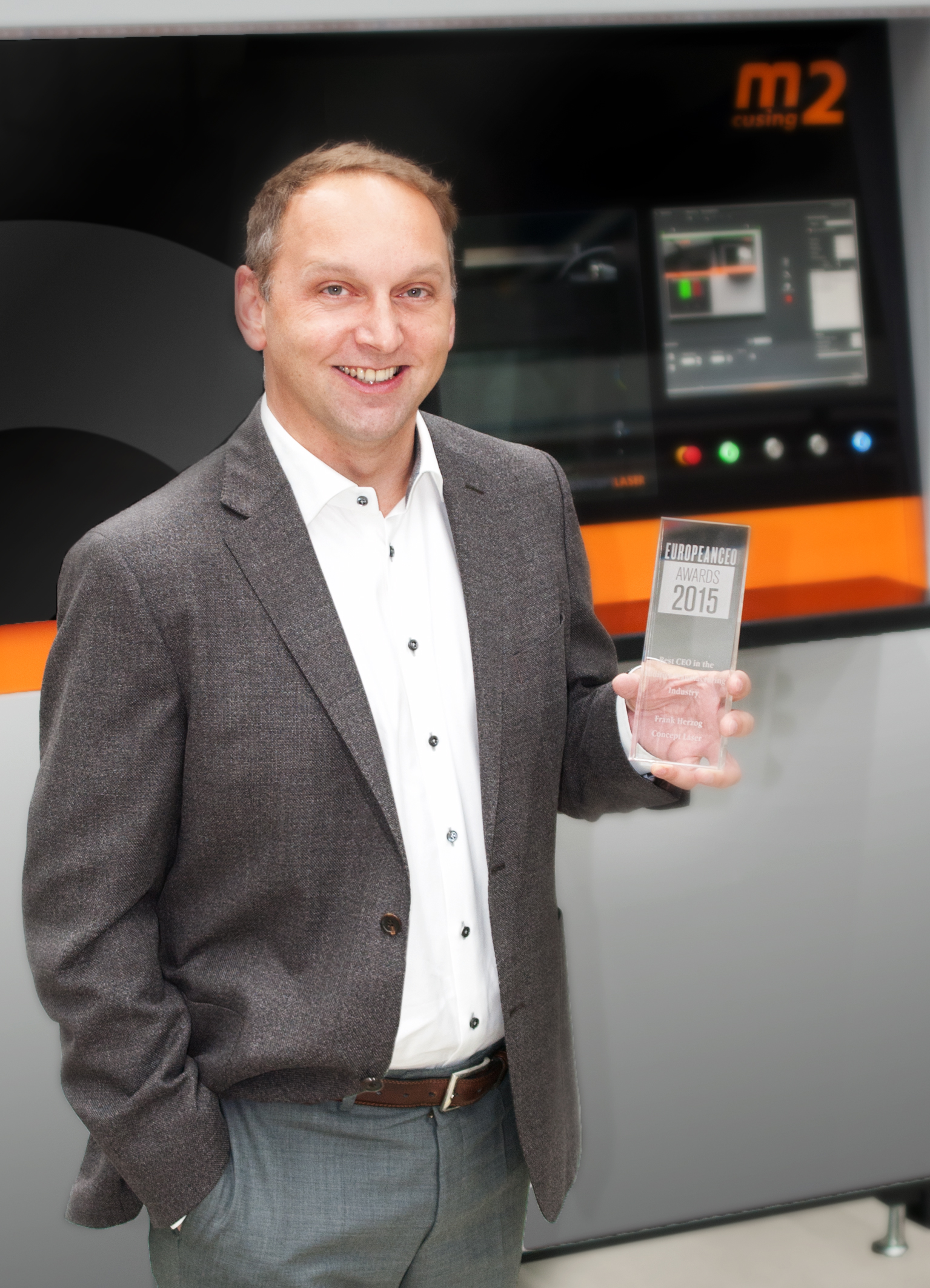 Yet another award for Frank Herzog, founder and CEO of Concept Laser: After being nominated for the 2015 German Future Prize, Frank Herzog has now been voted Best CEO in the Additive Manufacturing Industry 2015 by the London-based publication “European CEO”. The award recognizes the outstanding entrepreneurship that has made Concept Laser so successful in the past 15 years since the company was founded in 2000. The judging panel also honored Herzog’s achievements in the field of laser melting with metals that have contributed to additive manufacturing as a groundbreaking technology.

The publication “European CEO” in London has been presenting the CEO of the Year Award for more than 8 years. The network of journalists and industry insiders at “European CEO” observes influential trends, initiatives and developments across European industry as well as the executives and CEOs who shape it. The publication reports quarterly on the current activities of business leaders. A total of 4,000 executives in 28 European countries read the journal, according to the publication. The website receives 2.2 million visitors per month and the newsletter reaches 35,000 executives. All award winners will be presented once again in the latest issue of the publication, which will appear during the World Economic Forum in Davos, Switzerland, (21 – 23 January 2016).

The nomination process for 2015 CEO of the Year
The CEO of the Year Award recognizes outstanding business leaders. Each year, “European CEO” asks a panel of internal judges to identify entrepreneurs who they think will shape the future. The publication then ranks these leaders by the number of votes they receive from panel members. In 2015, three finalists were nominated for top CEO in additive manufacturing. As is so often the case, the jury engaged in heated debates about the merits of the nominees for each industry award.

“European CEO” selects Frank Herzog for outstanding entrepreneurship
The judging panel recognized Concept Laser’s consistently solid growth as an expression of Frank Herzog’s farsighted leadership. After increasing sales by 75% in 2014, Concept Laser continued its success with a further 35% increase in revenues during the first quarter of 2015. Whereas the company sold 45 systems during the same period last year, Concept Laser has already received 68 orders this year, a dramatic increase of nearly 50%. The company is planning to increase the number of machines sold even further to 150 units by the end of the year. Second quarter sales also grew by a further 35% compared to the same period last year. Once again, the revenue growth was solely due to sales of large-scale systems in the 1000W laser class, and demand from the aerospace industry in the USA. Staff numbers also increased by a further 30% compared to 2014 in the first half of 2015. The company currently employs 150 people and is continuing to grow. In the past two years, the company has also made many investments in order to meet the structural challenges of this remarkable growth and set the stage for a successful future. In 2014, Concept Laser opened a new development center to expand its research and development activities for systems, processes and materials. The center is now home to approximately 50 employees in research and development. This was followed by a massive expansion of manufacturing and assembly capacities, culminating in a new and streamlined distribution center that opened in 2015.

“European CEO” recognizes additive laser melting as outstanding technology
The award recognizes not only Frank Herzog’s entrepreneurship, but also his dedication and innovative contributions to additive manufacturing as a groundbreaking new technology. “This award is an important acknowledgment of Concept Laser’s innovations. As a company, we’re happy that additive manufacturing is bringing about a paradigm shift in design and production environments. Future components will be more efficient, of better quality, available faster and more cost-effective.” This paradigm shift in design means that lightweight designs, new integrated functions, improved topologies or bionic structural elements will become a crucial part of the way engineers approach design. Ultimately, the geometric freedom inherent to this process will give rise to a continuous stream of new product ideas. “Whenever the digital 3D product is better and more cost-effective, we begin a new chapter. I’m confident that 3D printing has an excellent future,” said Frank Herzog.