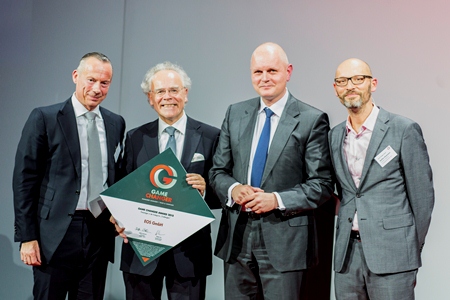 At the first award ceremony for the “Game Changer Award”, which was initiated by Manager Magazin and Bain & Company, the prize in the “Challenger Category” went to EOS, the global technology and quality leader for high-end Additive Manufacturing (AM) solutions. The event was held at the Gasometer in Berlin/Germany.

Olaf Koch, Chief Executive Officer of METRO AG, who delivered the laudatory speech for EOS, states: “As the market leader and pioneer of the revolutionary industrial 3D printing technology, we considered EOS an obvious candidate for the Game Changer Award. EOS’ development since its formation in 1989 to the present provides impressive proof, as the company progressed from Rapid Manufacturing of prototypes through small series to series production for larger volumes. EOS is an excellent example for technical innovation and entrepreneurial creative power.” And he adds: “The current and especially future impact of the technology on value chains in the industry and the entire economy is enormous.”

Dr. Hans J. Langer, Founder and CEO of the EOS Group, explains: “We are very pleased with this award, and would like to thank the initiators and the jury. It shows us that we are making the right decisions on the basis of our long-term business strategy. With this award, Manager Magazin and Bain & Company are also honouring a technology that is already heralding a paradigm shift in engineering and production, and that plays a role in gradually creating entirely new business models at our customers.”

The selection of finalists for this award was based on a structured methodology, and followed the same four-level approach for all three categories: Preparation of a long list of companies, followed by a general preliminary selection and selection of the finalists on the basis of specific criteria related to digitisation. The selection was also based on discussions with national and international industry experts. In a last step, the finalists were subjected to a due diligence, which was then presented to the jury to determine the winners.

The Game Changer Award was awarded without a call for applications. Only companies whose head office is located in Germany were considered. This resulted in 78 potential candidates for the Challenger Award. In this category, the investigation focused mainly on the disruptive potential of the business model and its impact on customers and competitors. In this context, the following factors were analysed in particular: added customer value, the impact on the industry, as well as the future outlook for sustained and profitable growth.

The detailed company analyses were made available to a jury of high-ranking members as a basis for evaluation. On that basis, the jury subsequently selected the three winners in the different categories. The jury members are: