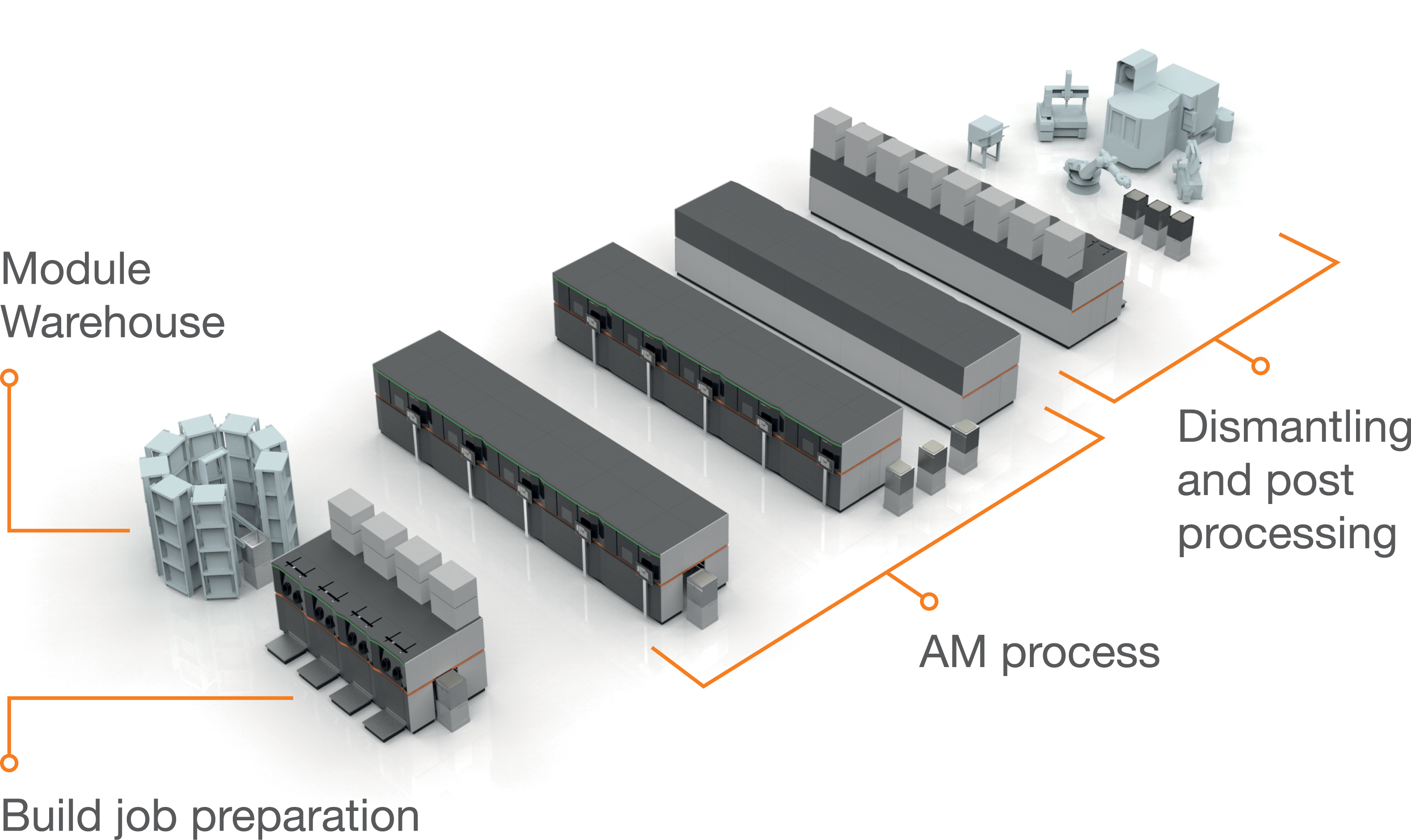 Lichtenfels (Germany), September 2016: The Industry 4.0 strategy is having a tangible impact on 3D metal printing. With the new 3D metal printing machine technology and the vision of the “AM Factory of Tomorrow” that lies behind it, Concept Laser is raising the Additive Manufacturing of metals to the level of a “smart factory”. This fundamentally new, modular and flexible approach enables automated, digitized and interlinked industrial series production. The basic idea is to decouple “pre-production” and “production.” Both tasks can now be carried out in parallel and physically separately from one another. From the perspective of the company from Lichtenfels in Germany, the maxim for the future is to operate in parallel rather than sequentially. The move away from “stand-alone” solutions is making Additive Manufacturing faster, more cost-effective and more industrial. Flexibility and availability will increase. Manufacturing can now be scaled optimally for any task. The new machine architecture from Concept Laser is regarded as the starting point and basis for the “AM Factory of Tomorrow” to enable the economical series production of metallic parts.

With an ambitious and consistent focus on optimizing the digital process chain, the new machine architecture from Concept Laser promises to set a new milestone in industrial 3D metal printing. With the integration into the machine environment, decoupling and automation of process stages, the lead times until the finished 3D part is ready are massively reduced. 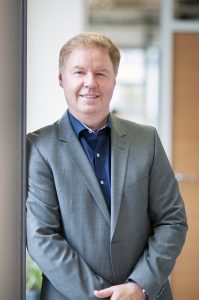 “As a trend-setter, Concept Laser is once again providing different solutions to the competition. And this is a good thing too. With its new machine architecture, Concept Laser will again set a milestone and benchmark in the Additive Manufacturing of metallic parts. This approach follows completely new paths and enables economical series production. We want to significantly enhance the added value for our users.”

Uniqueness: 400 x 400 x >400 mm3 build envelope with up to 4 x 1,000 W laser power
Following formnext powered by TCT 2016, the next milestone for Concept Laser will be the commercial availability of the new machine architecture based on the vision of the “AM Factory of Tomorrow.” In the future, the trend-setter Concept Laser will offer stand-alone process stations for the build process. They will have a build envelope of 400 x 400 x >400 mm³ equipped with 1 to 4 laser systems using multilaser technology with variable focus diameters encompassing 400 W to 1,000 W laser sources. This demonstrates the enormous strength of the machines from Concept Laser which is taking industrial series production to new levels. Also integrated in the machines is a 3D scanning system which enables real-time adjustment of the laser spot with diameters of from 50 – 500 μm. An available redundancy of the lasers will ensure that, if one laser fails, the remaining three lasers will still cover the entire build plate – the build job can therefore still be completed.

World premiere: New coating process and tool changing system
The new machine concept has an innovative 2-axis coating system. It allows the coater to return in parallel with the exposure. This dual function results in a considerable time saving during the coating process without the spatter problems that usually arise in the market today with systems that coat in both directions. This innovative approach combines the advantages of intelligently used multilaser technology with a desire for maximum quality. The coater blades, optionally made of rubber, steel or carbon, can be changed automatically during the build job. An automated tool changing system, as is the case with CNC machine technology, promises a high level of flexibility as well as time advantages when setting up the machine, and reduces the level of manual intervention by the operator.

Decoupling of “pre-production” and “production”
The new machine architecture is characterized essentially by decoupling of “pre-production,” “production” and “post-production.” This includes among other things flexible machine loading and physical separation of the setting-up and disarming processes. The objective here was to coordinate the process components in a more targeted way with interfaces and increase the flexibility of the process design to create an integrated approach. This becomes possible thanks to a consistent modular structure of “handling stations” and “build and process units” which, in terms of combination and interlinking, promises considerably greater flexibility and availabilities. It will also be possible to handle the present diversity of materials better, and ultimately more economically, through a targeted combination of these modules. For example, in future the machine user will be able to use the modules to very precisely “customize” the production assignment in terms of the part geometry or material. All in all, the level of efficiency and availability of the production system will be markedly increased, along with a significant reduction in the amount of space required. Simulated production scenarios have in fact shown that this space can be reduced by up to 85% compared to the possibilities that exist at present. In addition, the laser power per square meter of area used is increased seven-fold.

Movable modules as a link
The material storage facility, the process unit and the unit for collecting the excess material were previously connected together in a fixed manner. The result of this is that, for example when new powder needs to be supplied, the build process has to be interrupted, which in turn leads to the downtimes that have been mentioned. The new approach now envisages dividing these three sections into individual modules. These modules are independent of one another and can be controlled individually. The modules are moved via a tunnel system inside the process or handling station. When new powder is supplied, for example, the empty powder storage module can immediately be replaced by a new module in automated fashion without the build process necessarily needing to be interrupted. Finished build jobs can now also be moved out of the machine with the dedicated module and replaced directly by a new prepared build module so that production operations can be resumed immediately. What is remarkable is the direct link between these modules without the use of any pipes or tubes and their identification via RFID interfaces. Accordingly, the result is a reliable flow of materials with high material throughputs along with great flexibility when there is a need to supply different types of materials for the build process and handle them. Concept Laser envisages largely automated AM factories in the future. The transport of material or entire modules can be envisaged as being done by driverless transport systems. This will then be the next step in the development. Additive Manufacturing can be automated to the maximum extent. An automated flow of materials results in fewer personnel being required. But it also palpably reduces the workload for operators as the powder-filled modules can weigh several hundred kilograms.

New software architecture: Transparent process monitoring with CL WRX 3.0 software suite
A new software architecture has been designed for controlling and monitoring machine components and the flow of data. It combines MDL (machine data logging) with ODL (operating data logging). At the same time, it organizes the flow of data across the entire digital process chain. CL WRX stands for “Concept Laser Works.” The integrated tool is intended to offer the Additive Manufacturing workers transparent process monitoring, active process configuration and automation through to component documentation. Logging the relevant characteristic data for a highly dynamic process quickly is always very important for the user. This makes it possible to see the amount of powder remaining, check the build progress, interpret error messages or see pending maintenance tasks in advance. At the same time, CL WRX 3.0 offers interfaces for incoming CLS data, automation tasks and links to the company’s ERP systems. Additive Manufacturing is therefore integrated into the operational environment.

Verdict
Four innovative features are the main characteristics of the “AM Factory of Tomorrow”: The new machine architecture is noted for a large build envelope of 400 x 400 x >400 mm3, maximum laser power of 4 x 1,000 watts, a new coating process that saves time, and an automatic tool changing system. But the key element is the modularity and the resulting flexibility of the new machine solution. The process station and handling station can be combined as you require, but process stations and handling stations can also be operated physically separate from one another. Any desired interlinking and combination of the individual machines or elements of them is thus possible. The consequence is increased flexibility and availability, along with a significant reduction in the amount of space required and a considerable increase in the laser power per square meter of space used. In addition to the interlinking, automation is the second key element. Processes which were previously manual, such as supplying new metal powder or reworking the parts, and the downtimes resulting from this are reduced to a minimum. Modules which for example supply new material to the machines or send finished build jobs to the downstream manufacturing steps are automatically moved to the required position. This delivers considerable savings on time and costs, which ensure the required level of economic efficiency in series production.
The new machine architecture results in the overarching scenario of the “AM Factory of Tomorrow,” which also envisages linking up with traditional manufacturing methods, e.g. in the post-processing of the components. The concept consistently implements the basic idea of Industry 4.0 with a focus on delivering a “smart factory” and meets the demand of industry for interlinked machine solutions that allow the economical series production of additively manufactured metal parts.