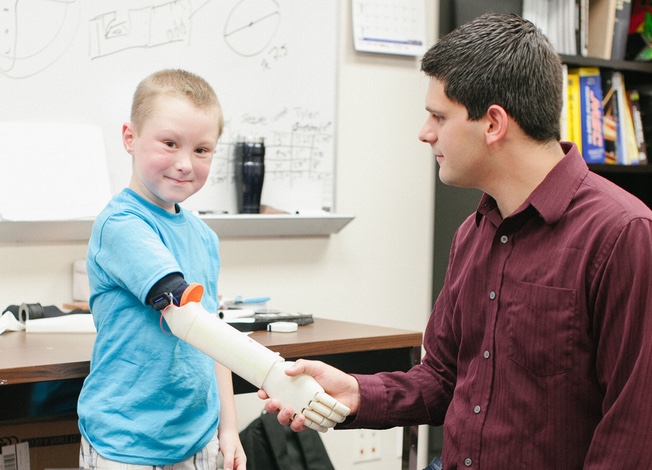 Born without his right arm, Pring always dreamed of climbing trees or shaking hands. His dreams came true thanks to UCF engineering students who designed and 3D printed a functional prosthetic arm. Aerospace engineering Ph.D. student and Fulbright Scholar Albert Manero is a volunteer at E-Nable, a network of 3D printing enthusiast’s whose goal is to develop 3D prosthetic hands for those in need. Manero met Alex and his family through the E-Nable online network.

Manero, along with his team, dedicated seven weeks for their design. The Dimension Elite 3D PrinterTM delivered rapid design iteration during the process and the Ivory ABS material used was strong, yet light enough for Alex to easily move.

“He learned to use the prosthetic fast,” Manero said. “When he could control it, the first thing he did was hug his mother. He said it was their first real hug. There wasn’t a dry eye in the room. I think 3D printing is revolutionizing our world in many ways. I believe changing the world of prosthetics is very real,” adds Manero. “Stratasys tools with UCF ingenuity will change the world.”

The UCF team will continue to look for new ways to improve their design. As Pring gets older, the team will be able to 3D print a larger arm for a fraction of the cost of traditional prosthetics. “I can shake two people’s hands at once,” Pring joked. The team plans to publish the design files online for public access with instructions to 3D print it so more lives can be transformed.

“3D printing is changing the way prosthetics are designed and produced in ways previously not possible,” notes Gilad Gans, president, Stratasys North America. “It’s a remarkable feeling when you see how 3D printing gives a kid the chance to live a happy life like other kids.”