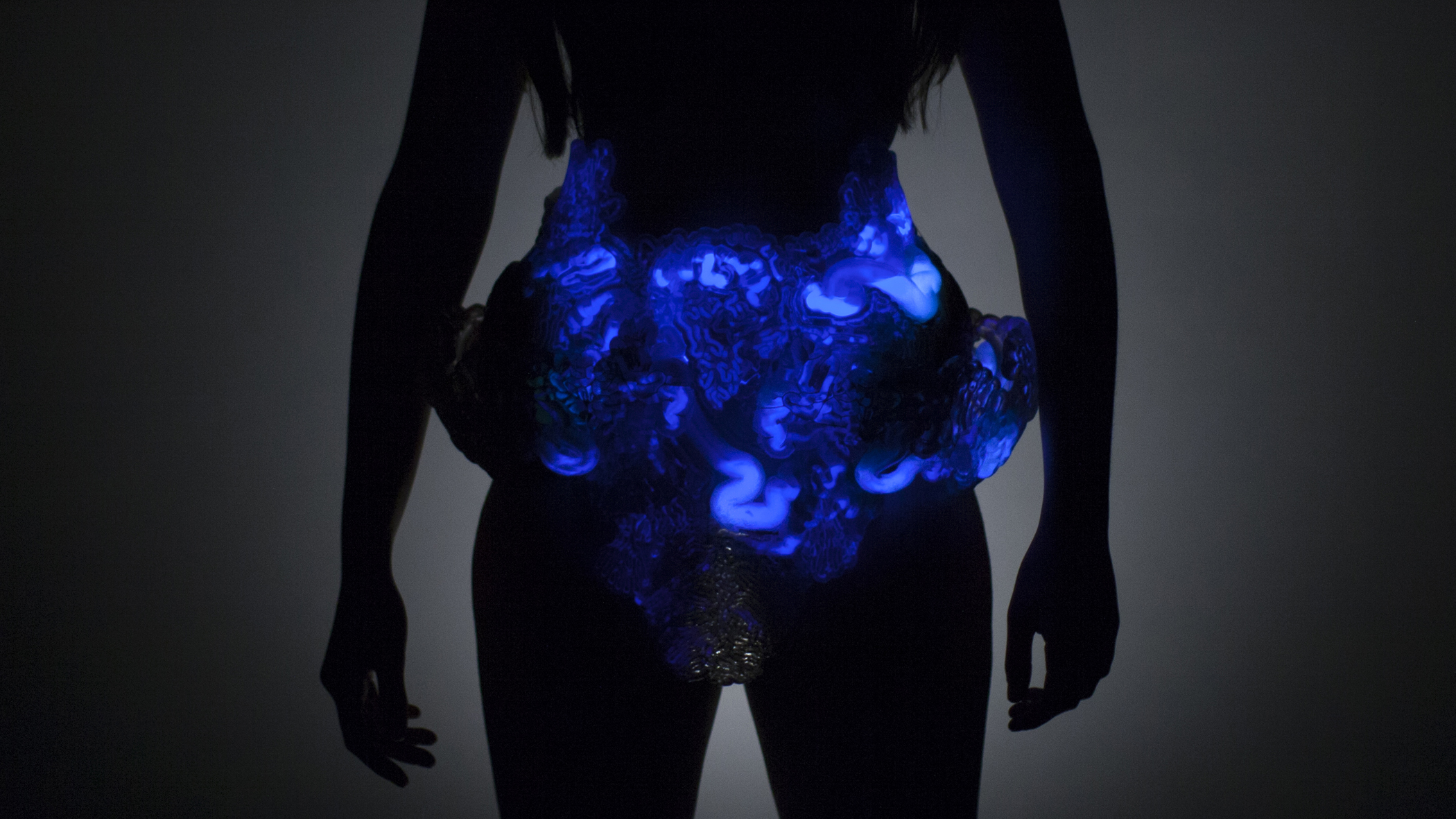 In a step change for science, technology and design, Oxman explains how Mushtari has been developed not only to host living organisms, but also to manipulate their function. As Oxman states in her oration: “We live in a special time,” alongside the latest advances in computational design, materials engineering, synthetic biology, and additive manufacturing.

“This is the first time that 3D printing technology has been used to produce a photosynthetic wearable piece with hollow internal channels designed to house microorganisms,” Oxman explains. “Inspired by the human gastrointestinal tract, Mushtari is designed to host synthetic microorganisms – a co-culture of photosynthetic cyanobacteria and E. coli bacteria – that can fluoresce bright colors in darkness and produce sugar or biofuels when exposed to the sun. Such functions will in the near future augment the wearer by scanning our skins, repairing damaged tissue and sustaining our bodies, an experiment that has never been attempted before.”

Stratasys’ unique triple-jetting 3D printing technology enabled Oxman’s team – including her researcher, Will Patrick – to create a large fluid network within Mushtari that varied in transparency from opaque to clear. According to Oxman: “This enabled varying levels of transparency and translucency to be designed into surface areas where photosynthesis was desired. Channels and pockets were implemented to enhance the flow and functionality of the cells – such mechanical and optical property gradation can only be achieved using multi-material 3D printing with high spatial resolution for manufacturing.”

Stratasys developed a new tailor-made solution for this particular piece. According to Naomi Kaempfer, Creative Director Art Fashion Design at Stratasys, “We have a fertile research collaboration with Professor Neri Oxman, one that has great reciprocal benefits as we push each other to the edges of expression and technological capability. 3D printing Mushtari is a wonderful example of how far this collaboration can bring us. The fluid channels in the wearable stretch to around 58 meters, with an inner channel diameter ranging from 1 mm to 2.5 cm, frequently turning sharply in new directions. Clearing the support material out from such a long, narrow and complex structure to create the hollow channels for living matter presented a significant challenge. Our R&D team went beyond the boundaries of our existing technology, formulating a dedicated improved support structure to allow a smooth, effective process in support of Professor Oxman’s vision.”

Mushtari is a continuation of a piece from Oxman’s Wanderers: An Astrobiological Exploration, part of ‘The Sixth Element’ design collection curated by Stratasys for EuroMold 2014. With four pieces of artwork, the Wanderers series is an ongoing collaboration between Stratasys and Neri Oxman, as well as members of the Mediated Matter research group, the Laboratory of Prof. Pamela Silver at Harvard Medical School, and Deskriptiv (Christopher Bader & Dominik Kolb).

The Wanderers series speculates about the possibility of voyaging beyond planet Earth to other planets. Each of the wearables in the series is designed to contain and generate life-sustaining elements. Mushtari, meaning huge or giant in Arabic, evoking the planet Jupiter, was designed as a single strand filled with living matter. An organ system for consuming and digesting biomass, absorbing nutrients and expelling waste, the 3D printed translucent tract was designed to support the flow of cyanobacteria engineered to convert sunlight into sucrose presenting the prospects of sustaining living organisms inside a wearable.

The Stratasys 3D printed piece for Oxman’s creation and TED Talk continued this idea and saw Mushtari function for the very first time as a vessel to support, control and manipulate living organisms inside a wearable device. 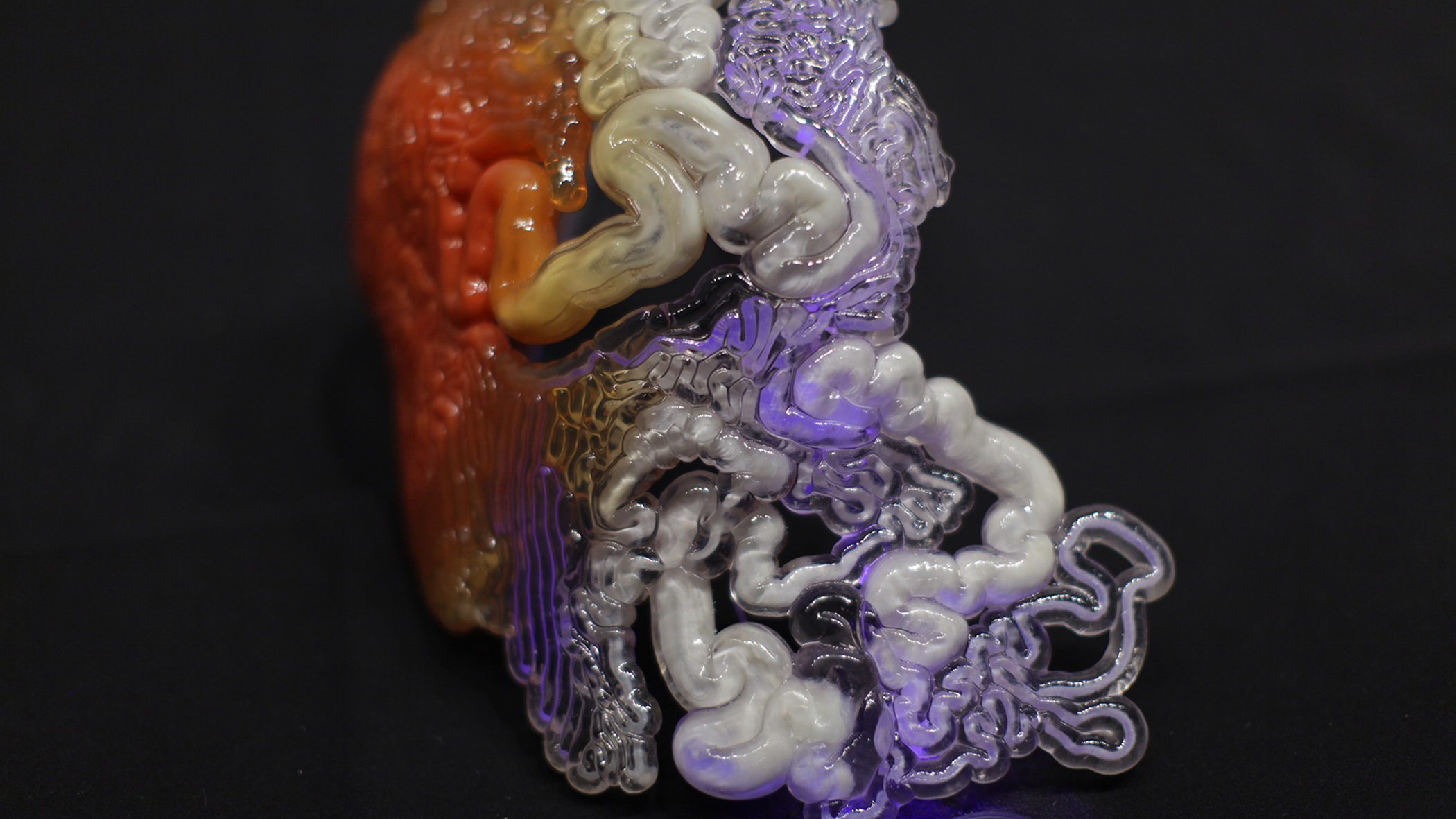 Other Stratasys 3D printed pieces featured in the TED Talk that were developed by Oxman and her team, included an acoustic chair designed to absorb sound, a ‘second skin’ cape and skirt designed by Oxman with Iris Van Herpen for Paris Fashion Week 2013, and a bone and muscle inspired helmet from Oxman’s ‘Imaginary Beings: Mythologies of the Not Yet’ collection. For the Imaginary Beings series, first shown at the Centre Pompidou, Paris, in 2012, Stratasys once again pushed the boundaries of its existing technological capabilities, showcasing a demonstration of 3D printed design pieces in color with a combination of different material properties, possible only with the Stratasys unique triple-jetting 3D printing technology.

“In the end, it is clear that the incorporation of synthetic biology in 3D printed products for wearable microbiomes will enable the transition from designs that are inspired by Nature, to designs made with and by Nature, to, possibly designing Nature herself,” says Neri Oxman as she reflects on the future.