3DPrinterOS announces their network has surpassed 2000 online 3D printers. Since launching in mid-March, over 4700 users in 920 cities and 83 countries have combined to create 8100 prints across 2000+ 3D printers in that time period. Comparatively it took 3D Hubs over 32 weeks to cross the 2000 printers threshold. In just the past 3 months, 3DPrinterOS users have combined to print over an entire years worth of time.

With an average of 90 hours of printing through the network per day over the past 90 days, the data shows that schools and universities have led the charge into networked 3D printing.

“When Facebook was introduced, the first adopters for their social network were universities. By networking 3D printers and sharing access campus wide, schools are leading the growth of desktop 3d printing,” said CEO John Dogru.

Schools Embracing 3D Printing
5 out of the top 10 users in 3DPrinterOS are schools or work closely with them. With the rise of software that works across multiple 3D printers, schools are building innovation centers and fablabs with multiple brands of 3d printers as they are now not limited to only Makerbots and SD card control. Instead of the traditional method of using excel sheets to track prints and jobs, administrators are using the cloud to monitor usage and analyze data over time.

“The hold up is now the hardware…which used to be so far down the learning curve it was almost a non-problem. Most people give up at the software never getting to the hardware hurdles. Thanks to 3dprinteros, students have been able to leap past all that right into STEAM learning,” said Justin Kelly, after school program coordinator and top 10 user on 3dprinteros. 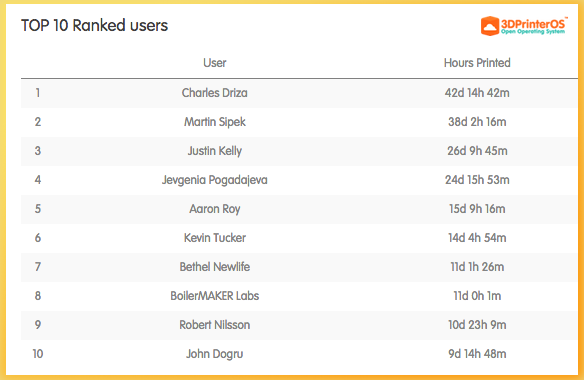 The average share rate for the 2000+ printers is almost 2 to 1. Meaning for every 3D printer being added to the network, almost 2 users are gaining access to 3D printing. This sharing between users and printers is turning 3DPrinterOS into the fastest growing connected factory in the world.

3D Printer Trends
Similar to the June 3D Hubs Trends report, the Makerbot Replicator 2, Ultimaker 2 and Prusa i3 Hephestos are by far the most popular printers in 3dprinteros. The Wanhao Duplicator 4, Printrbot Simple Metal and Makerbot 2x and custom Marlin printers also are in the top 10 for hours printed. The fastest growing new printer profiles have been the Kossell Mini, Lulzbot Taz 5, Airwolf 3D XL, Felix 3.0, Leapfrog Creatr and the BQ Witbox. 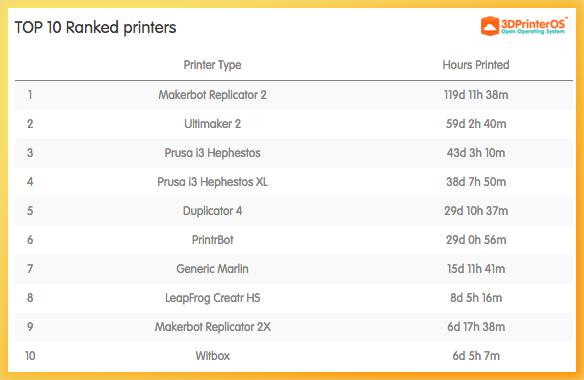 The 3DPrinterOS software is available to try here and for any manufacturer to use on Github.