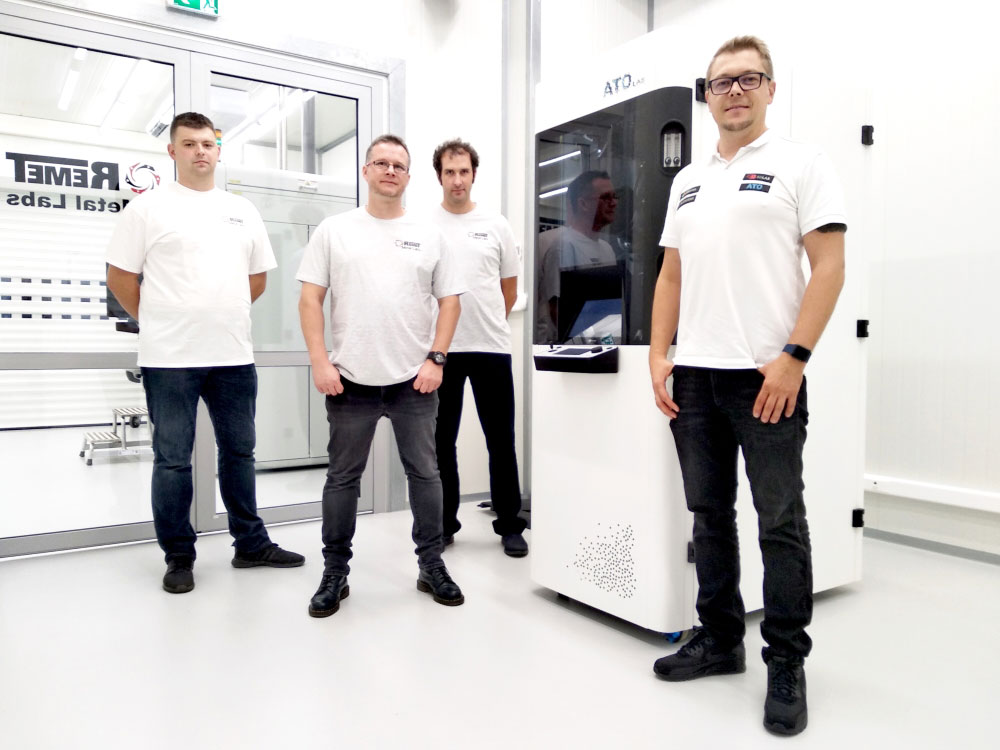 Remet – leading European manufacturer of steel structures used in the oil and gas mining industry, opens modern laboratory specializing in the production of prototypes made in metal 3D printing technology. Located in Stalowa Wola, Poland, the company has installed one of the most modern metal 3D printers on the market – DMP Flex 350 by 3D Systems, the first office friendly metallic powder atomizer – ATO Lab and a whole range of devices and machines supporting additive production and enabling comprehensive research on materials and manufacturing processes. The project was implemented jointly with 3D Lab – renowned manufacturer of ATO Lab metal atomizers and a leading distributor of industrial 3D printers in Poland.

Remet has been on the market for over 10 years, specializing in the production of solutions used to extract oil and gas from the bottom of the seas and oceans. The end users of the company’s products are the largest mining companies in the world, such as BP, Statoil, GE Oil & Gas, and ExxonMobil. It has 4 production halls, in which a total of 200 people work. Is equipped with one of the largest surfacing lines in Europe for oil and gas transport pipes with metal.

Remet Metal Labs is a new branch of the enterprise, where comprehensive projects in the field of new industrial applications and additive production will be implemented. In addition to 3D Systems metal 3D printer and ATO Lab atomizer manufactured by 3D Lab, the laboratory has been equipped in one of the best scanning microscopes on the market, an ultrasonic screen enabling the separation of powders of a selected fraction, a heat treatment furnace operating at temperatures up to 1200°C, a laser welding station and a machine for machining printed details. Remet also has super-fast 3D Systems photopolymer printer – Figure 4, which allows additional elements to metal 3D printed products, as well as testing ideas and solutions at the stage of pre-processing. 3D Lab has participated in the laboratory design process, providing the above-mentioned machines and equipment.

The biggest advantage of Remet Metal Labs over other centers of this type is the combination of a modern metal 3D printing system with the 3D Lab atomizer – ATO Lab, which allows testing and production of a wide spectrum of powdered metal alloys, diversified in terms of chemical composition and fraction.

While creating the concept of the laboratory, the starting point was the ATO Lab metal atomizer. This is where the material production stage begins, which is used at a later stage for 3D printing. The goal of the Remet Metal Labs laboratory is to create conditions enabling very high flexibility in creating prototypes in the field of powder production. It is specifically about non-standard chemical compositions or recognition of material properties in their comprehensive composition range – from the lowest content of elements for a given species to the highest content, which gives measurable results in terms of microstructure and mechanical properties.

3D Systems DMP Flex 350 metal 3D printer has a module that allows to adjust the power of the melting laser material, so details with different properties can be manufactured. The 3D printer allows quick retooling in up to 2 hours, which gives great flexibility in the area of conducting various types of tests and allows far more iterations. One of the main advantages is an open laser parameter control system. The software enables designing a map where user chooses which areas will be fused with what power? Thanks to this, the detail will have several properties combined, e.g. where it will be more flexible and where it will be harder.

Remet addresses its offer to both existing customers and the automotive as well as aviation and space industries. It laboratory is an example of a highly conscious planning strategy and bold concept for building one of the most technologically advanced AM laboratories in this part of the world.

3D Lab and Remet will jointly present their solutions during the November Formnext 2019 trade fair in Frankfurt am Main, Germany.