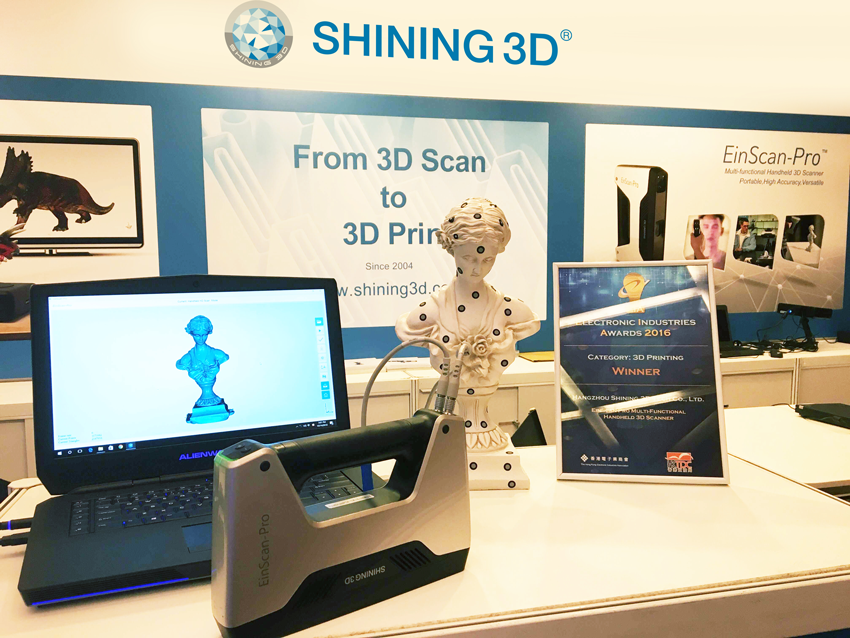 October 14 (Zhejiang, China) – After recently taking on a bold challenge with the “Save the world ART” initiative, which is calling upon creatives around the world to scan and preserve the artworks and artifacts of their surroundings, SHINING 3D’s EinScan Pro 3D scanner has been awarded with the prestigious 2016 Electronic Industries Award in the 3D Printing category. The award was presented at the Hong Kong Electronics Fair (Autumn Edition), which takes place from now up until October 16, 2016 at the Hong Kong Convention and Exhibition Centre. The 36th edition of the event was organized in collaboration by the Hong Kong Electronic Industries Association (HKEIA), together with the Hong Kong Trade Development Council (HKTDC). SHINING 3D has been awarded with “EIA: Product of the year 2016” Trophy for their EinScan Pro 3D scanner. 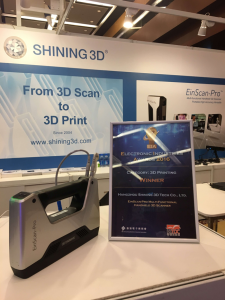 The award will include benefits such as promotional campaigns launched by the HKEIA and their partners, which will enable Shining3D to display their prized products at major international electronics trade fairs throughout the next year, and also advertise in relevant media outlets, including newspapers magazines, websites, and other online platforms. The EinScan Pro was judged on a comprehensive criteria that included design, innovation, quality, environmental, marketability, usefulness of functions, and packaging. The panel of judges was made up of highly respected academics, industry stakeholders, and industrialists.

The EinScan Pro is the world’s first multi-functional handheld 3D scanner, and is equipped with four different scan modes including handheld rapid scan, handheld 4D (High Definition scan), automatic scan, and free scan mode. The versatility of the 3D scanning system allows for optimal use with a number of applications, including R&D, computer graphics, art, human 3D scanning, education, and much more. An external texture camera can also be attached to obtain full-color 3D scanning, creating a vivid digital experience for all users. These 3D scans can also be transferred to the 3D model platform Sketchfab in a one click, producing a 3D printable STL model.

The Electronic Industries Award 2016 was granted to the EinScan Pro for it’s versatility, high speed, high compatibility, quality scanning capabilities, and cost-effectiveness. You can catch SHINING 3D and their EinScan Pro 3D scanner at the remainder of Hong Kong Electronic Fair, which goes on until October 16 2016, at booth number CH-E01. The Electronic Industries Award was presented to SHINING 3D at a special ceremony on October 13 during the HKEIA Annual Dinner. As a perk of the award, the company’s EinScan Pro will also be on display at the Hong Kong Electronics Fair (2017 Spring Edition), Lifestyle Expo in Dubai 2016, Lifestyle Expo in New Delhi 2016.

So if you’ll be present at any of the aforementioned events, come stop by and meet the most versatile and efficient 3D scanner on the retail market in person! You can also check out more information about the multi-functional handheld EinScan Pro 3D website.