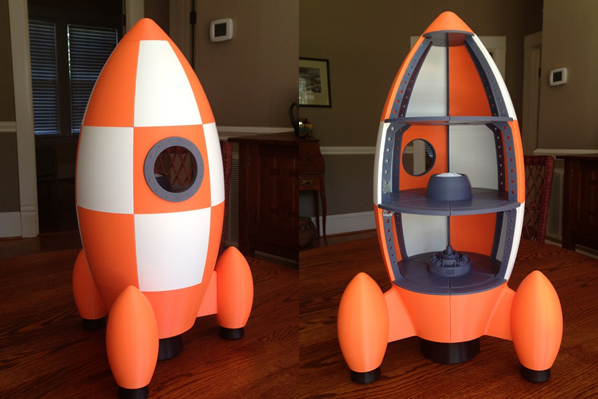 Chris Knowlton would easily win in a “Coolest Grandpa of the Year” competition. Not only did he have the idea to create a rocket playhouse for his grandson, Benjamin, he used his 3D-printing know-how to build an amazing kid-sized rocket ship complete with tiny astronauts and a moon rover vehicle!

Originally inspired by a similar rocket from MakerBot, Knowlton created his own 3D designs for the rocket ship and moon vehicle. Knowlton said of his design, “My plan was to make an open-sided rocket, a moon rover vehicle with trailers, and enough supply items so that my little two-year-old ‘astronaut’ can stock the spaceship for a pretend flight into space and then explore the new worlds in the moon rover.” 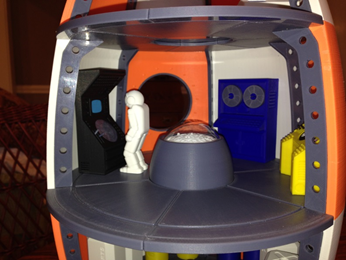 He printed the parts in ABS filament using his Printrbot Simple Metal 3D printer. For better build platform adhesion, he used a heated bed, Kapton tape and a thin mixture of ABS and acetone. The rocket is nearly two feet tall and was printed in sections, each of which fit a 6”x 6” x 6” build platform. The combined printing time for the more than 195 parts that make up the rocket, the moon rover and all their accessories was roughly 300 hours!

When Knowlton started working on his rocket project, he did not have Simplify3D. “Like everyone else, I was trying free slicer and host software, but none of them provided me with the control I felt was necessary to print parts at the highest level of quality,” he said. “After getting Simplify3D, the difference in print quality was incredible.”

Knowlton had already printed quite a few rocket parts before purchasing the Simplify3D Software. After seeing the difference in the print quality, he scrapped them all and started over using Simplify3D.

To ensure a high-quality, durable part that can withstand playtime with a two-year-old, Knowlton adjusted the Simplify3D settings to print most of the parts with a three-layer shell, five bottom solidlayers, and seven top solid layers. Infill varied from part to part, but was usually around 20 percent. The larger outer pieces of the rocket were printed at layer height of .20mm, while the floors and most of the separate items were printed at .15mm. 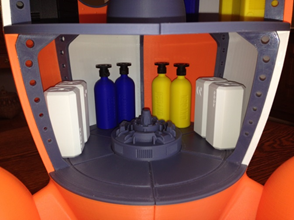 The interior of the rocket was designed with three floors, each with an opening that provides a pathway between them. Knowlton’s grandson can also choose to install the top of the rocket engine or a moonscape viewer in the openings. To make more room in the spaceship, he can also install a circular flat floor plate into the openings. Each of the three floor plates has an astronaut-themed saying on it: “Rocket Benjamin,” “3-2-1 Blastoff!” and “We are go!” To protect the floors from what will be very enthusiastic playtime, Knowlton also added felt pads to the bottom of the finished rocket ship.

Knowlton downloaded and printed models for the plastic astronauts, but designed the rest of the rocket accessories using Autodesk Inventor. He created two space beds that match the shape of the astronauts, a computer cabinet, a radar screen cabinet, a flight control panel, and a moonscape viewer. In addition, there are several tanks and containers for oxygen, food, water, and parts; everything an astronaut needs to blast off into the stars! 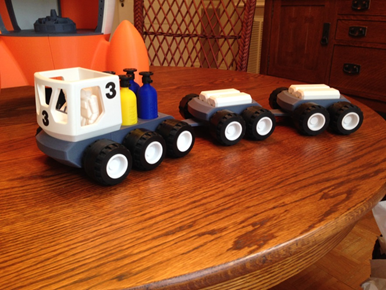 Once little Benjamin lands on the moon, his grandpa has ensured the astronauts will get around in style. The moon rover Knowlton designed has six wheels and a cab that holds the two plastic astronauts. Behind the cab are four round holes that hold the oxygen and air tanks for transport. Any number of trailers can be added behind the front vehicle. Each trailer holds two of the food or parts containers.

Knowlton explained, “My grandson has a real interest in vehicle tires and trains so I designed the vehicles to hook together and to have lots of wide tires. Each tire is made up of five plastic pieces and four square rubber O-rings. The O-rings give the tires a more authentic look and protect the playing surface. They are also much less noisy than plastic tire treads.” 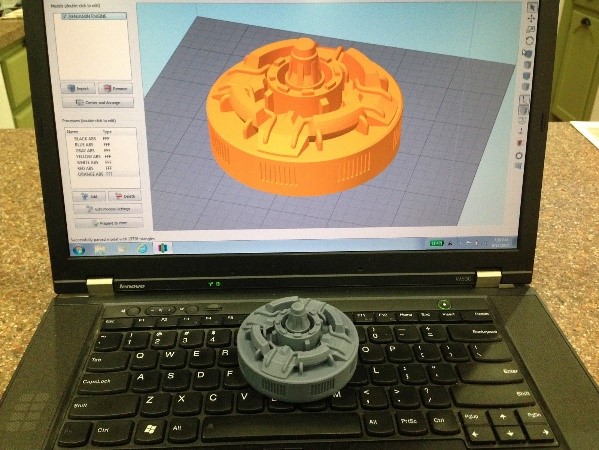 Perhaps nobody appreciates this new set of 3D-printed space vehicles more than two-year-old Benjamin, who can look forward to many hours of fun with his new toys.