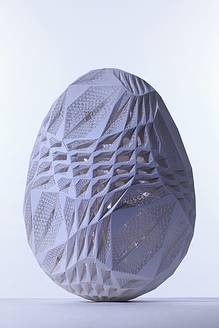 Fourfoursixsix, a highly acclaimed international architecture practice, EOS, the world leading manufacturer of laser-sintering systems, and Ogle Models, exquisite cutting edge Model Makers, are delighted to support the world’s biggest egg hunt this Easter. These companies have worked together to create a laser-sintered egg that is highly intricate in structure, yet contemporary and sculptural. From 21st February, when the UK’s capital becomes home to 200 giant and uniquely crafted Easter eggs, this egg will go on display. The collaboration between Fourfoursixsix, EOS and Ogle Models has facilitated the design and production of an exceptional piece that is at the forefront of three dimensional design and manufacturing methods – again showing that additive manufacturing can deliver outstanding results that it is impossible to create in any other method of manufacture.

Daniel Welham of Fourfoursixsix explains their design approach for the egg: “We decided to consciously move away from the mere development of a surface treatment to the egg. The geometry in question provided us with the perfect platform to begin applying a set of architectural principles to the overall form. Through this process we played with structure, light and shadow and began to develop a three dimensional architectural terrain.”
And he adds: “Conceptually, the design works around a rational grid of components that have been configured to react to both light and scale across the surface of the egg. Each component incorporates an aperture within its design that can adjust to control the amount of light entering the internal space of the form.”
Within Fourfoursixsix, 3D design is an integral part of their design process, and they were excited by the potential this project held to exploit these modern design methods.
Designing and manufacturing the egg formed an opportunity to combine this technology with the latest additive manufacturing processes – in technical terms called laser-sintering – to create a highly intricate sculptural form, which is both contemporary and unique. This format allowed Fourfoursixsix to apply a playful and avant-garde approach to the formal treatment of the piece, free from the limitations that more formal construction approaches may have held.

Stuart Jackson, Regional Manager for the UK at EOS explains why the company did not hesitate to join this exciting project: “As a mainly engineer-driven company we normally focus on industry applications in aerospace, medical, automotive and alike. The egg is a perfect example for laser-sintering applications that can catch people’s imagination on another level. Here, as with all other cases, the design drives the manufacturing and not vice versa. Parts can be created that would not have been possible with conventional manufacturing technologies. As such, this laser-sintered egg is a perfect example for the vast possibilities the technology can offer.”
Laser-sintering is an additive layer manufacturing technology and differs significantly from conventional manufacturing methods due to the principle used. Digital three-dimensional data must be available for the objects in order to use this technology to manufacture products for a variety of industries. Three-dimensional models of products are generated on a computer using CAD software. This 3D CAD model is sliced into thin layers during production. The desired geometry is then manufactured layer by layer with the aid of laser-sintering technology and based on this model. First, a thin powder layer of plastic, metal or molding sand is applied. A focused laser beam solidifies the powder according to the digital cross-section of the material. Once a layer is completed, the platform is lowered by several tenths of a millimeter and the process starts all over again. The non-fused material is removed during the last step. In this way, it is possible to produce highly complex parts – like the egg – without any downstream work cycles or use of additional tools. Moreover, several different parts can be manufactured in a single construction phase.
Daniel and Stuart agree when saying: “We wanted to test people’s perceptions on what can be created using these modern methods and hope people look at the piece and question how it was both designed and made. Whilst laser-sintering within architectural circles is not an uncommon subject, within a more public environment it is still a relatively unknown technology. We felt the project provided a real opportunity to reach out to a wider audience and showcase what can be achieved.”
And Daniel concludes: “Our egg aims to show the potential of 3D design and production methods. The intention was to develop a design that could not be created any other way. We have used our ability to work with these tools to develop an intricate, delicate and complex piece that intrinsically connects back to the spirit of the Faberge brand, which focuses on highly accomplished design and craftsmanship alongside the use of exquisite materials. In some ways, our design brings this concept into the modern era on a larger scale; a piece of 21st Century digital opulence.”