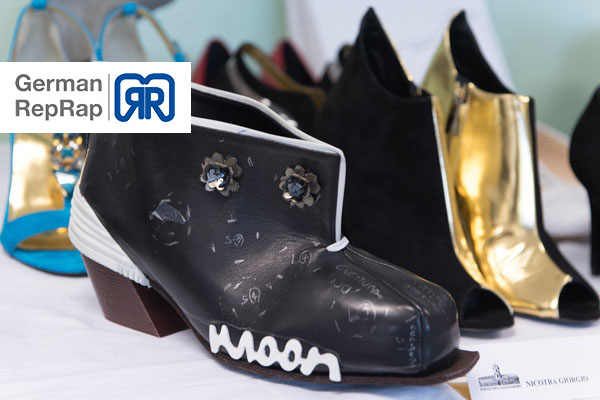 For the Footwear Polytechnic FFlab is the future. German RepRap’s Italian Reseller 3DZ provided printers and 3D scanners to the laboratory that will focus on research, training and rapid prototyping.

In September 2016 the Footwear Polytechnic of Riviera del Brenta, institute of excellence in the footwear industry, launched FFlab – a digital laboratory specializing on new 3D scanning and 3D printing technologies.

The School was founded in 2001 by the long tradition of the Brenta’s shoemakers that has its roots way back in 1268 in Venice with the first Brotherhood of Calegheri, shoemakers precisely. The footwear district has successively developed starting from 1898 thanks to the entrepreneur Luigi Voltan, who founded in Strà, province of Venice, the first major shoe factory of the territory. Borns here, in 1923, the school of “Design for Arts and Crafts”, specialized in training designers, model makers and technicians of the shoe. The Polytechnic carries on traditional knowledge and widens it doing research. It invested in a rapid prototyping laboratory and in the emerging FFLab in order to offer companies new product development opportunities.

3D printing allows companies to achieve in a shorter time and with reasonable costs the aesthetic model, the functional one and small production series for the sampling and fashion shows. The components prototyping regards parts which make up the shoe such as forms, insoles, heels, soles and accessories. All can be realized in reduced times”, explains Alice Marcato, bio-engineer of the R&D department and manager of FFLab.

In the laboratory of the Polytechnic, footwear components are designed in an electronic format with the 3D CAD technology and then printed in 3D with the 3D printer German RepRap x400 PRO V3, provided by 3DZ. The other method used is reverse engineering, which allows to get, through a 3D scan, the physical model of a CAD file, ready to be edited as needed and then printed. These new technologies, which can be enjoyed by FFLab visitors, allow the Footwear Polytechnic to meet the demands and needs of the companies that cater to the institute.

Veneto is, in fact, an area specializing in designing and manufacturing quality products, but often does not have the technology, equipment and internal professional skills that allow companies to be competitive by reducing production and of industrialization times and costs.

The use of new scanning and 3D printing technologies enabled companies to create structures, accessories and other components impossible to realize with their equipment, with a greater precision. Users can directly provide the STL file suitable for printing, already created within the company (like a heel, an accessory, a sole), or providing the physical object, such as a shape, in order to make it scanned, rebuild in 3D or even modified making some changes. It will be then printed in 3D with the given material. Regarding the future development of 3D printing the FFLab manager says:

“3D printing will move from mere prototyping of parts to complex design, from development to production; companies will probably exploit these technologies to its own production of components, especially thanks to the release of new materials, more resistant and sought selected, and the increasing reduction of production times.”

On the occasion of the Polytechnic’s equipment enlargement, 3DZ supported the School with the choice of the most appropriate technology for its needs: in this case, the 3D printer German RepRap x400 and 3D scanner Geomagic Capture.

Satisfied with the purchase, the Footwear Polytechnic is considering buying a second 3D printer, which would enable an additional accuracy in prints and better details for particular types of objects. Moreover, they would get a differentiated product that has already been requested by some company.

Furthermore, 3DZ collaborates in the training course on “Rapid Prototyping and Reverse Engineering” aimed at people employed in the footwear industry. Lessons are taught by Eng. Alessandro Favaro from 3DZ Treviso and Prof. Matteo Turchetto of the University of Padua, which deals with projects on 3D scanning. More free seminars on 3D printing and Reverse Engineering were launched in October at FFLab.

“We have turned to 3DZ for the prior knowledge of the capabilities of this company, the equipment quality, the availability and excellent service. Thanks to their on-site training, two people of the staff have been instructed about the proper use of the new equipment”, summarizes Alice Marcato.