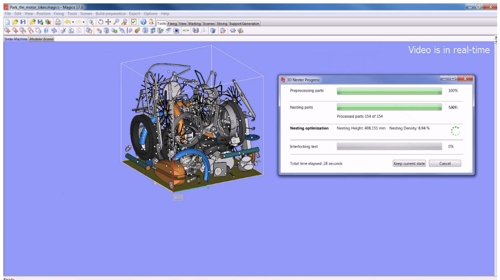 November 11, 2012: Since 1994 Magics is being used as additive manufacturing software and enables the user to manipulate CAD data and to create printable .STL files. Functions for repair, analysis, documentation and optimising have been improved for the current version.

Version 17 features an even more intuitiv surface and the speed has been improved dramatically. In addition following new functions were introduced:

Materialise announces the launch of Magics19, the latest release of its STL file preparation software for AM professionals.

With Magics19, Materialise’s software developers have created a powerful range of features designed to take your data preparation to the next level. Taking full advantage of our Build Processor technology, these flexible solutions include:

In addition to the enhanced functionalities, Magics19 is also introducing new and improved modules. The SinterModule has been expanded by adding a slice distribution option for the 3D nester. This allows you to focus on part quality and, with the new built-in mechanism, you can avoid interlocking parts after nesting. New marking tools have been added to the Support Generation (SG) module to provide more flexibility and control during the generation of supports. And for users that need flexibility for multiple materials or different part types, SG profiles have also been introduced. Finally, to ensure that even specialized users such as jewelry makers or those creating industrial metal applications are able to maximize their use of Magics, a new Tree Supports module has been added.