3D printing service provider Sculpteo has released the second edition of their international studym shining light on the current state of 3D printing.

The 2016 State of 3D Printing report aims at sharing the collected data from participants across the 3D printing industry in one global study and analyses how businesses and individuals are using additive manufacturing technology. It is based on nearly 1,000 respondents with professions ranging from food processing to aeronautics.

For 26% of professionals 3D printing is most important in product development, with the primary use being at 50% prototyping, followed by 30% for proof of concept. Plastics represent 73% of all print, as it is the most suitable material due to printing speed and affordability. Resins account for 26%, metals for 23%, multicolour sandstone for 13% and ceramics for 8%. 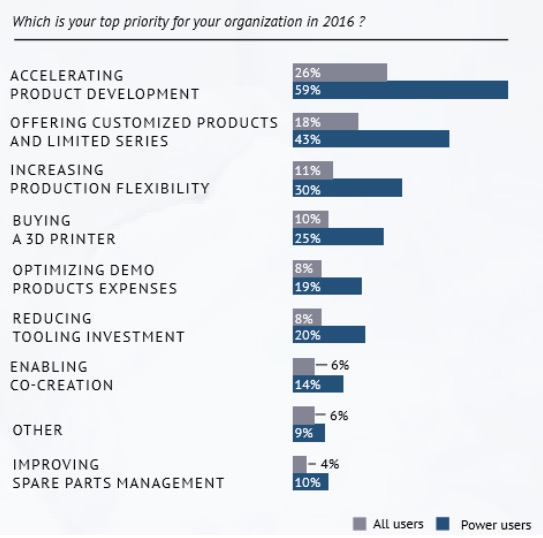 While the technology is being used in new ways across all sectors, companies are also integrating it into their activities: “Power Users are trained to handle different technologies and are integrating 3D printing as a solution across internal departments; among Power Users 64% say they have integrated 3D printing at least two of their programs versus 23% for non-power users.”

The report also outlines that 3D design is the cornerstone of 3D printing, with 93% of power users and 84% of non-power users being the creator of their 3D files. Moreover, power users are using significantly more materials for the 3D printing projects than regular users.