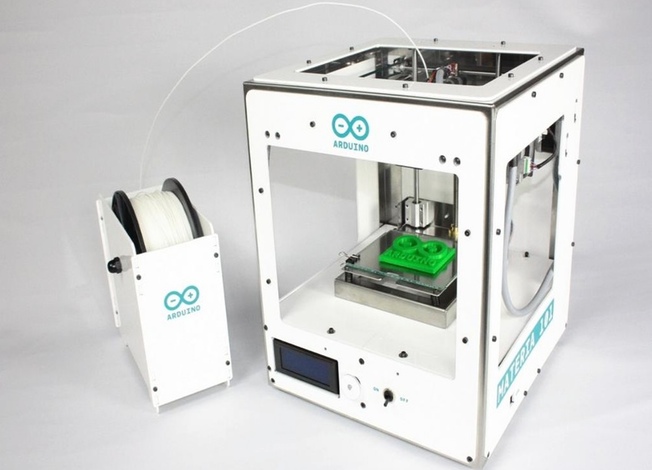 The Italian based companies Arduino and Sharebot have worked together to create the open source 3D printer MATERIA 101.

September 30, 2014: The open source FFF 3D printer will be available both, in assembly kit and already assembled. Arduino and Sharebot want to target consumers and makers as well as to offer a device for educational use. MATERIA 101 will be officially introduced at the Maker Faire in Rom on October 3rd.

Completely open source and with a small price, Materia 101 is a printer dedicated to a collective use (like a classroom, a fablab or a cooperation space); it is the best and simple way to enter in the world of 3D printing and rapid prototypation.

Materia 101 is a precision 3D printer, designed and developed in Italy, thanks to the collaboration of two companies, with a similar way of thinking and acting.

Arduino played an essential role in the promotion and dissemination of open-hardware in Italy and abroad. The printer could only follow this vocation. Sharebot has for years releases different parts of its licensed open printers. All the technical drawings, mechanical extruder and customized firmware are Marlin’s).

The official presentation will be held at Rome’s Maker Faire on Octobert 3rd.

The printer will be available both in assembly kit and already assembled. It is indicated to an educational, consumer and maker use and market.

The price of the kit will less than 600 euros, while the other version will be available at less than 700 euros.

Arduino, the first and most common Open Source hardware platform, was released in 2005 to simplify the electronic prototypation process. It helps everyone, even with little or
no technical background, to realize interactive projects. The Arduino’s ecosystem is a combination of three different elements: a series of simple and accessible electronic boards, a free software used to schedule them and a lively community to allow anyone to realize their own ideas. Every day on the website www.arduino.cc thousands of people connect with other users to help, cooperate and contribute to this project.

Sharebot ( www.sharebot.it ) is a young firm focused on the realization of 3D printers, an innovative start-up with the goal to produce and develop new technolgy for the 3D printing world. The mission is to be able to create new and ready-to-use 3D printers. In a short time the firm has become a leader in Italy and one of the main european manufacturers.